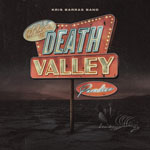 Kris Barras was voted Breakthrough Act in our 2021 poll and the last couple of years have seen him – like many artists – maintaining his profile largely due to livestreaming.  But it’s also given him the opportunity to consolidate the band’s sound which over a six year period has moved from blues rock to anthemic alt-metal in the vein of an Alter Bridge, Shinedown or Fozzy.

Since 2016 Barras has built a following in both UK and Europe but the breakthrough tag in 2021 really reflects a more mainstream acceptance of his offering in a year that he managed to play Stonedead festival, a support with Black Stone Cherry plus an acoustic set with The Darkness.

The early single ‘Dead Horses’ gave a portent of the continuing commercial approach.  This template, following 2019′s ‘Light It Up’,  is repeated throughout the album.

There’s really no filler, just piledriving blues infused riffage and anthemic hooks as evidenced in ‘Long Gone’, ‘My Parade’ and ‘These Voices’.  The pace only slackens slightly for ‘Wake Me When It’s Over’ and ‘Bury Me’.  This album has seen Barras collaborate in the song-writing department with the likes of Bob Marlette (Ozzy Osbourne, Alice Cooper) and Jonny Andrews (Three Days Grace). They have certainly lent a U.S. style sheen.

‘Death Valley Paradise’ is Barras’ most consistent outing to date.  With each new album his early musical forays and not least his cage-fighting past are cast in half-shadow.  What now emerges is an artist on the verge of arena acceptance on his own terms.  *****