Album review: BANGALORE CHOIR – All Or Nothing, The Complete Studio Albums (3 CD Set) 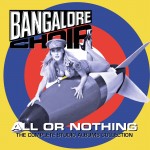 As well as the band’s career albums, On Target (1992), Cadence (2010) and Metaphor (2012), there are a dozen or more live bonus tracks and several interviews with mainman, David Reece, an eloquent musician who is always worth listening to.

Few bands who break up after one album will regroup 18 years later. But that’s exactly what this band did.

Founding member, David Reece, ex Accept, formed BC in 1991. He was a shrewd operator. Of the songs he didn’t write for On Target, he chose wisely.

But… it was 1992 and the melodic rock genre was teetering on the edge of its sell by date. The album stiffed and the band went their separate ways.

Reece re-assembled the band in 2010. Original guitarist Curt Mitchell came on board, but others declined. To that Reece added distinguished guitarist/ songwriter, Andy (UDO) Susemihl and drummer, Hans (China White) in ‘t Zandt.

Cadence was released in September 2010.

The expertly crafted ‘Living Your Dreams’, ‘Power Trippin’ and ‘Sweet Sensation’ are tougher, grittier, bluesier. The songs are strong, constructed around a solid melodic backbone. It was a clear progression, but it just couldn’t gain critical or commercial traction.

The band’s third and final album, Metaphor, was released in 2012.  It opened to mixed reviews.

After Cadence’s emphatic step up in style and presentation from On Target, more perhaps was expected.

In places the songs are surprisingly conservative. It rummages through the past sometimes, repurposing an abundance of richly melodic twists and ear-catching hooks, like the naggingly familiar stadium rock of ‘Trojan Horse’ and the lean, laid back, medium paced radio rock of ‘Silhouettes on The Shade’.

That said, the band very successfully flex the limiting structures of the melodic rock formula on ‘Don’t Act Surprised’ and ‘Always Be My Angel’, and still make it sound fresh. A good way to bow out. ****