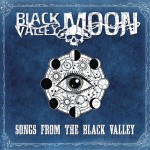 Black Valley Moon was formed in 2019 by guitarist Sam Williams (Down By Law) and started as an instrumental surf band, however, during the recent global pandemic they added vocalist Ray Vega.

The band have now released new album “Songs From The Black Valley “, a 13-track affair that mixes the sounds of garage, surf, rockabilly, and goth and at times this has the effect of sounding like an old school horror, or even spaghetti western soundtrack.

If the opening salvo of “Choppin’ ‘n Changin’” and “Proxima Centauri Calling” don’t reel you in, then I am afraid you may need to see a hearing specialist.

There is a trio of instrumentals, harking back to the band’s earlier days- the excellent “Cabinet of Curiosities”, the Shadows like “Bikeage” and “Christmas Time in The Castle of Blood”, the latter will no doubt be my ringtone by late November.

“Beware of The Night” has the feel of an old 1950’s school dance, whilst “310 to Yuma” has me asking if the term Goth Surf has ever been used and if not, can I claim to be the first? Other highlights include “Blackest Night”, “Sons of Dracula” and “Last Man On Earth”. That said, “Songs From The Black Valley“ is a consistently good album with no weak tracks in sight.

“Songs From The Black Valley” is available now on Bandcamp and all streaming platforms, with a vinyl release planned through Otitis Media Records later this year. ****