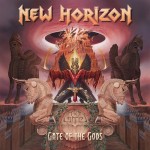 New Horizon is a H.E.A.T. splinter group, or splinter duo, to be precise.

Being almost famous gives you room to try other things, and so Jonah Tee and Erik Gronwall have been given the opportunity to indulge a passion from their youthful past.

Gate Of The Gods is described as a “Power Metal” album, although in fact it blends this metal variant with other cultural components, like Symphonic Metal. Sometimes this works, sometimes it doesn’t.

It works best with the seven and a half minute title track. Clearly the duo’s magnum opus, it closes the album in considerable style.

Using Egyptian musical modulations is an old trick, but in this case the epic opening bars provide a vivid aural landscape, helping us to anticipate and understand what the narrative is about to bring us.

Major chords, choirs and lyrical references to Babylon and other biblical places develops the song’s musical and lyrical theme. There’s nothing subtle or sophisticated about it, but it has considerable impact and is memorably melodic.

Only ‘Stronger Than Steel’, a stomping, stadium filling anthem, where dramatic momentum just about edges ahead of musical grandeur, and the racing, breathless ‘Stardust’, which sees them dancing successfully between genres, sounding much like a collision between H.E.A.T. and Stratovarius, come anywhere close to the calibre of the title track.

They all aim to be massive and cutting edge, but a bit too often they sound like yesterday’s news. ***