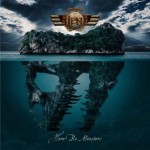 It’s been over three years  since Ten released the rather underwhelming ‘Illuminati’, though mainman Gary Hughes had a busy 2021 with a solo album and compilation and writing the critically acclaimed  ‘Tao’ project.’

‘Here Be Monsters’ is,  extraordinarily,  their fifteenth studio album and yet apparently a sixteenth is planned to follow shortly. Recently I returned to their early material that was a big part of my life in the late nineties and was shocked how rough the production of the likes of ‘Name Of The Rose’ was, so the sonics this time are a pleasure with Gary Hughes’ production, supported by Dennis Ward’s mixing, ensuring instruments are clearly heard and that baritone voice that rather divides opinion is presented at its best.

‘Fearless’ begins with a lengthy piano and acoustic guitar intro, giving way to a typical Ten song with trademark Hughesian lyrics and a riff that reminded me a little of a softer ‘Spellbound’. ‘Chapter and Psalm’ – a lyric in which gives the album its title- calls to mind another Ten oldie in ‘The Robe’ and initially the melody is led by Darrel Treece-Birch’s piano, but as it progresses the guitars carry it, soloing over a catchy refrain.

It’s also an example though of his occasionally over fanciful lyrical approach as I am not quite sure of the relevance of the title to the lyrical theme of adventures on the high seas, other than it scanned nicely.  The other criticism of Ten’s previous work recurs with the songs too long in places, especially when the latter part simply repeats verses and choruses at the same pace.

The mid tempo ‘Hurricane’ is also keyboard driven but with some solid guitar work while after an average opening ‘Strangers on a Distant Shore’ has an insidiously melodic verse and chorus. However the ‘Dream That Fell to Earth’ is the most average number ron the album for me, adding little new to what has gone before.

Interestingly the second half of the album is distinctly different in approach, being far lighter of touch and closer to more mainstream melodic rock with more straightforward lyrics to match, indeed closer in feel  to Gary Hughes’ solo work.

It kicks off with the catchy, direct ‘Miracle of Life’ with more quality guitar work and ‘Immaculate Friends’ boasts classic AOR keys. ‘Anything You Need’ even take this a stage further with some seventies soft rock harmonies a la Cats in Space.

While still melodic, ‘Follow Me Into the Fire’ is more guitar heavy and it has to be said that the guitar work from Dann Rosingana and Steve Grocott is outstanding throughout the album- serving the songs even when they burst from time to time into some more rapid shedding. They also take a more delicate approach, allied to strings, on the closing ballad ‘The Longest Time’.

If, like me, you had rather come to take Ten for granted, this album may make you think again, adding up with repeated listens to their most impressive work in quite a while. I wonder if the follow up can maintain the same quality?   ****1/4