Album review: RUST N’ RAGE – One For The Road 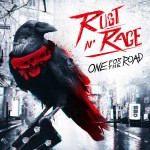 The label claims that Rust N’ Rage’s influences are Dokken, ‘Crue and ‘Priest, but in fact they’ve taken their lead from second or third generation European Melodic rock bands. Bands like One Desire, Eclipse and Brother Firetribe… the ones who’ve been carrying the torch for a much more streamlined – and dare we say, a little more operatic – version of the genre.

There’s a whole lot going on here, from a cultural update on Sea Shanties (One For The Road) to cowboy movie references (Ride On), so it’s no surprise to learn that it’s helmed by Jimmy Westerlund… One Desire’s imaginative, sought after producer.

But at its heart, it’s a Melodic Rock album that plays to the past without sounding cliched or derivative, with key tracks like ‘Prisoner’ and ‘Ghost Town’ – both gloriously reminiscent of Melodic Rock’s most hypnotic moments – opening the album. RNR’s music has an anachronistic sparkle that lights up their fresh spin on the AOR years.

‘The Future Is For The Strong’s grown up AOR is slightly subdued compared to the opening tracks. It has an interesting grown up tone and an informed narrative that doesn’t sound like anybody in particular, and that’s a good thing, in that it allows us to cast off restrictive references.

It immediately precedes ‘Heartbreaker’ which has the same transformative properties, only different. It’s AOR with a mammoth, declamatory arena rock chorus. Yet it’s quasi operatic in structure and is dramatic in execution.
Melodic Rock, just not as we know it.

And that notion is further reinforced by ‘I’ve Had Enough’s grown up lyrics, an astute commentary on the way of the world, delivered in Boyband style call and response vocals.
And even further by the album’s requisite ballad, ‘Unbreakable’, a sophisticated tangle of acoustic guitars, piano and strings, heavily influenced by what makes the international charts nowadays. Yet it passes for memorable AOR just the same.

No question, R N’R are a bunch of young men with a lot of talent, and a willingness to be different.