Album review: SHINING BLACK – BOALS and THORSEN – Postcards From The End Of The World

Share the post "Album review: SHINING BLACK – BOALS and THORSEN – Postcards From The End Of The World" 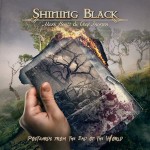 Shining Black’s 2020 self titled album collaboration was tuned into Hard Rock as much as it was to Melodic Metal. Guitarist, Olaf (Labyrinth, Vision Divine) Thorsen and singer, Mark (Malmsteen, Royal Hunt) Boals’ first musical marriage met with many admirers among the rock and metal demographics.

They’ve more than repeated the trick with ‘Postcards From The End Of The World’. By refining the formula, sharpening up on the songwriting and adding depth to the production, they’ve staked out a bigger chunk of fertile ground.

It isn’t destined to gatecrash the mainstream, but what we have here is an altogether bigger, braver beast, one that will attract music fans across the genres.

The opening tracks, ‘Postcards…’ and ‘Higher Than The World’ provide that initial focus. Billed as Power Metal, but both are hard rock songs, coated with a metalised sheen. And there’s never a note too many or a note out of place. Everything that’s needed – a solo, a shout, a chorus, a melody – is present and correct.

The duo consistently straddle the boundary between rock and metal, often switching horses midstream, as on ‘Time Heals They Say’ and ‘Leaves In November’.

The same goes for the vocals and the axework. Like the figurines in a Bavarian weather clock, the duo alternately take centre stage to suit the given song’s dynamics. ‘Death Angels’ and ‘Summer Solstice Under Delphi’s Sky’ capture this like hi-def pictures taken on the move.

You can almost see Thorsen stepping into the background frequently, moving up front when a riff or solo is needed, and Boals ceding ground, then taking centre stage when the song’s blueprint calls for it.

It’s a quietly sophisticated and and pleasingly stylish aggregation of rock/metal that’s been assembled here. We should hope it gets the recognition it deserves. ****

Share the post "Album review: SHINING BLACK – BOALS and THORSEN – Postcards From The End Of The World"