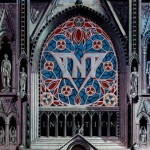 In 1984 TNT were a tight, solid rock band, populated by gifted musicians, all looking for a sound that would define them.

They had just broken through with second album, Knights Of The New Thunder, largely due to the recruitment of multi octave vocalist, Tony Harnell, who was the perfect partner for guitarist, Ronni Le Tekrø.

Le Tekro’s intuitive axework, sometimes big and bold, at others scaled down and intimate, worked well with Harnell’s vocal intensity.

The singles, ‘10,000 Lovers” and ‘Everyone’s A Star’ were the band’s calling card to the European and US markets. Demonstrations that they could compete and win in the cutthroat arena that was MTV.

Produced by Bjorn (Stage Dolls/Ian Hunter) Nessjoe, the songs catapulted the band onto the world stage, winning them awards and support gigs with Stryper, Twisted Sister and others.

Those two singles were shaped by the hard rock template of the time… but two standout tracks later in the album … the sprightly ‘Listen To Your Heart’, and the pared down ballad, ‘Northern Lights” indicated a more AOR direction of travel was on the horizon. ***1/2

Intuition was released in 1989. The polished, American AOR sounds of ‘Tonight I’m Falling’, ‘End Of The Line’ and ‘Take Me Down’ convinced the critics and the public. It led  to sold out headline tours in the USA, and ultimately making it their best selling album.

They were clearly writing to order and executing the task with skill and conviction.

The title track is a real blast of commercial pop metal, with just enough nuance and rock sophistication to make it that little bit special. And ‘A Nation Free’, the one and a half minute opener, has that patriotic appeal for national unity that always goes down well, no matter which part of the world is listening. ****

Rock Candy Records have remastered both with their usual flair. Finding the right balance between volume, tone and clarity seldom seems an impossible task for their back room boys.