Graham Gouldman chatted to Get Ready to ROCK Radio about his career including 10cc.  This archive interview was first broadcast 12 August 2018 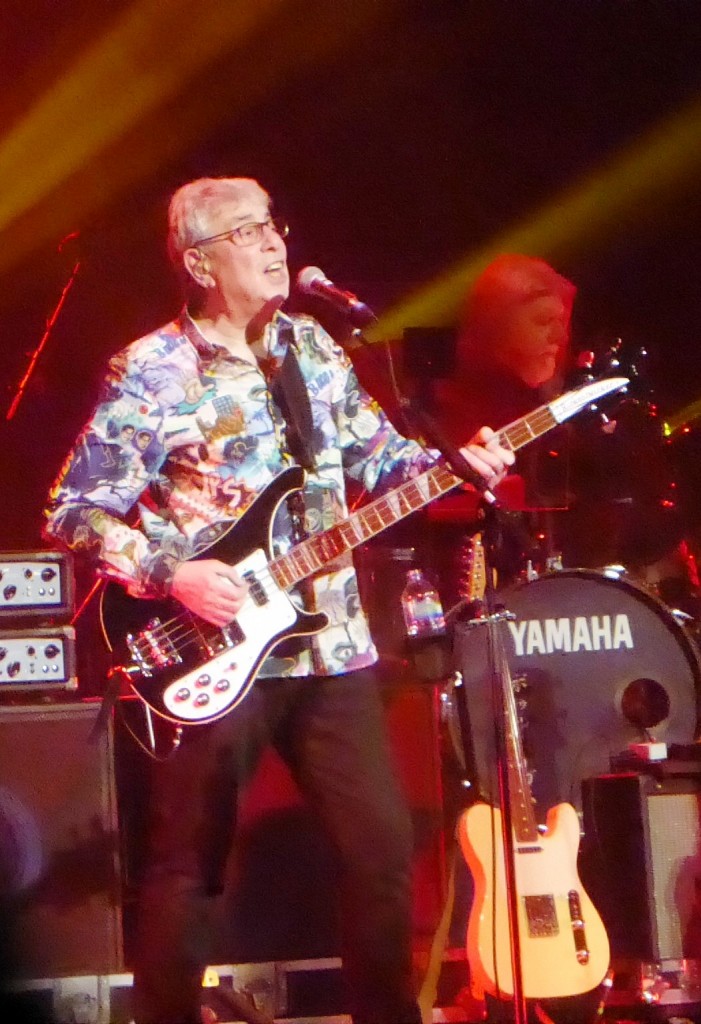 10cc occupy an unusual niche in rock history. Their run of hits, including three number ones,  make them one of the best selling UK pop acts of the seventies yet, even on those singles, there was an offbeat cleverness to them which was given even more reign on their albums.

Now, celebrating a full 50 years after their debut, a similar conundrum persists. Too good for the ‘scampi in a basket’ oldies circuit, but yet to reattain mass popularity- there is little chance of them playing Wembley Stadium as contemporaries ELO did not so long ago. 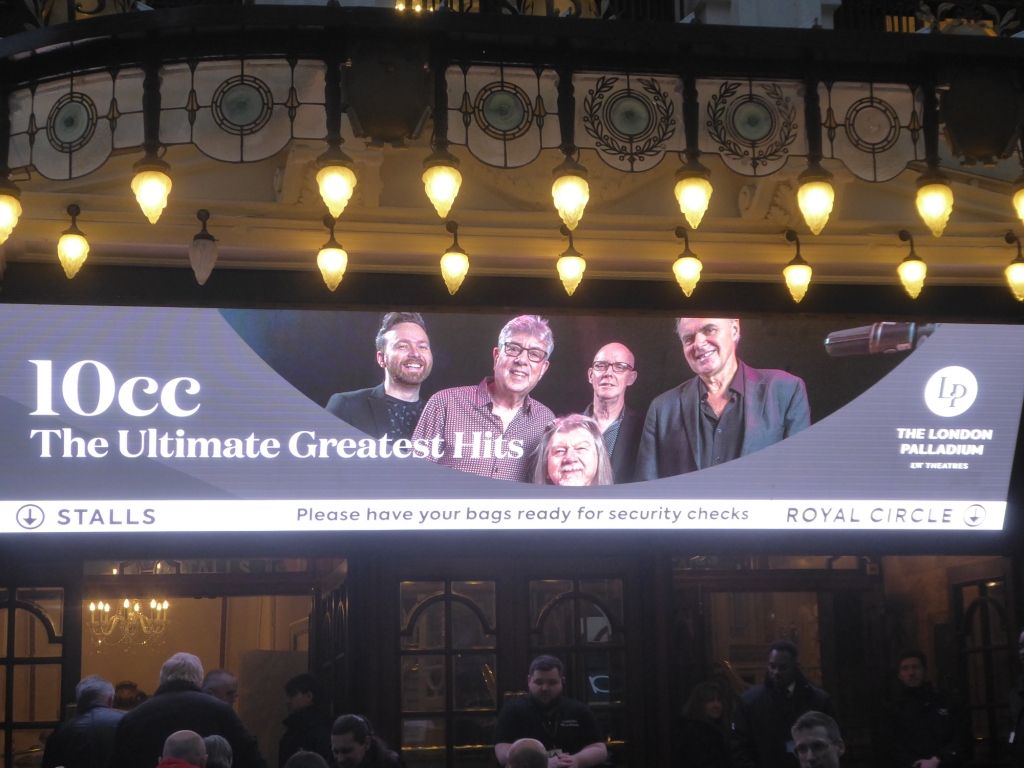 It does not help that of their four singer songwriters, only Graham Gouldman remains in the current lineup but with guitarist Rick Fenn and drummer Paul Burgess having been touring members since the seventies, allied to some wisely chosen fresh blood, their authenticity should not be questioned.

A healthy, if somewhat reserved, Palladium crowd were warmed up by an enjoyable opening acoustic set from Paul Canning, who has worked with Graham Gouldman and had a nice line in original material and sardonic banter, before 10cc were introduced by a full length video that seemed to retool their Neanderthal Man (in their guise as Hotlegs) for a new generation. 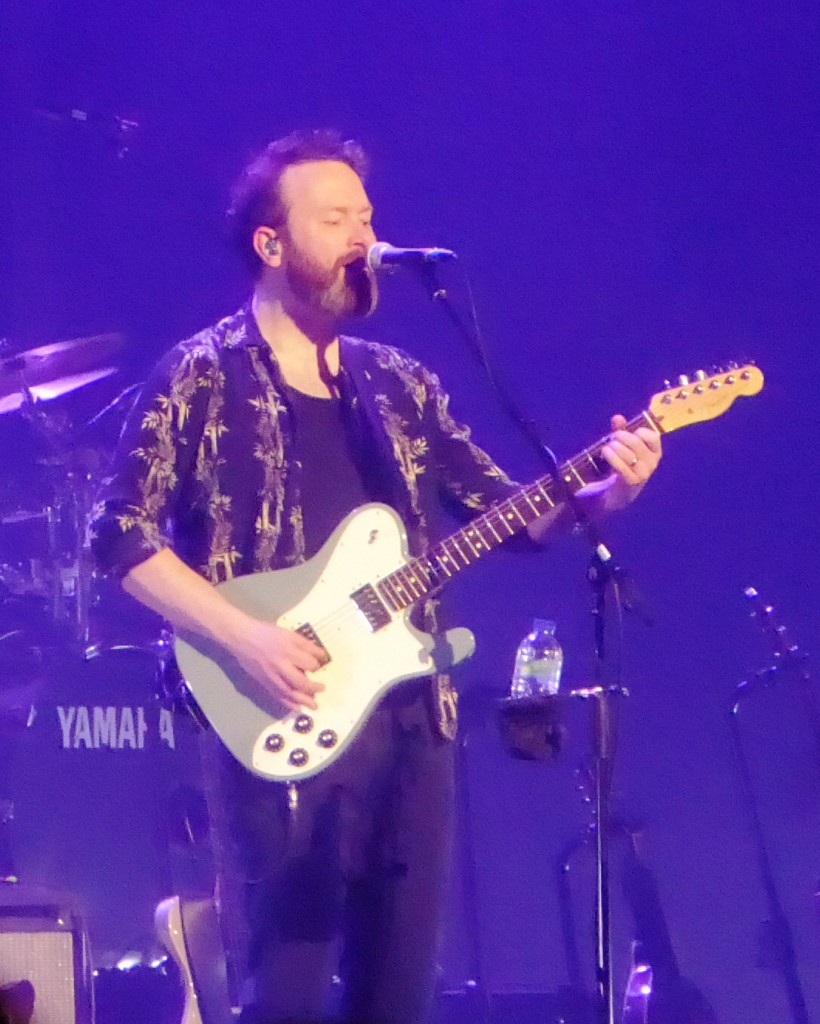 The tour had been billed as a greatest hits but a very proggy opener in ‘The Second Last Sitting For The Last Supper’ was the first indication that this show would actually be a lot more and indeed there was a lengthy instrumental intro before the first of the hits in ‘Art for Art’s Sake’, which Graham said had been a catchphrase of his father.

‘Life Is A Minestrone’ was among the songs showing the talents of Iain Hornal who handled many of the original Eric Stewart or Lol Creme  vocals with a marvellously silky smooth higher range and if anything eclipsed the talented Mick Wilson who was in this role when I last saw the band. 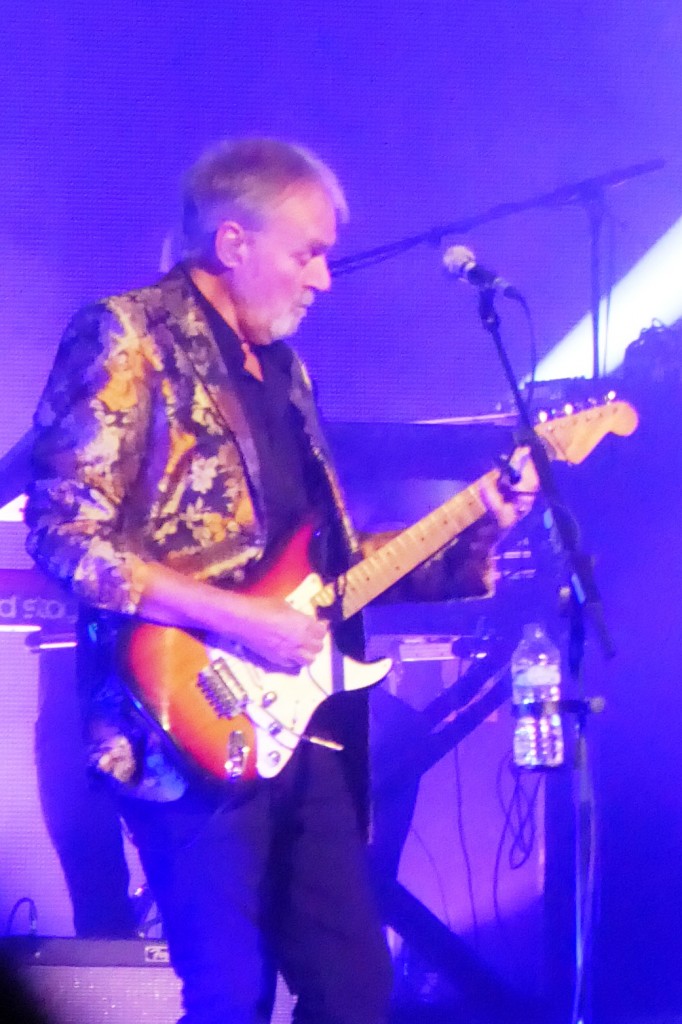 The Dean and I’ combined its catchy ‘humdrum days’ chorus with a vocal harmonies that were a Beach Boys pastiche, while ‘Good Morning Judge’ was given a funky, swampy feel by some tasty slide guitar from Rick Fenn. This was a prime example of his low-key but tasteful and impeccable playing served the songs throughout, his one concession to flamboyance being a nattily patterned jacket.

They moved between the hits and a generous selection of album tracks, including the prophetic ‘Old Wild Men’ with some great vocal harmonies and a brief snatch of harmony lead guitar, and the brilliantly bonkers ‘Clockwork Creep’ featuring a vocal duet between Rick and Iain. The progressive elements culminated in the epic ‘Feel The Benefit’. 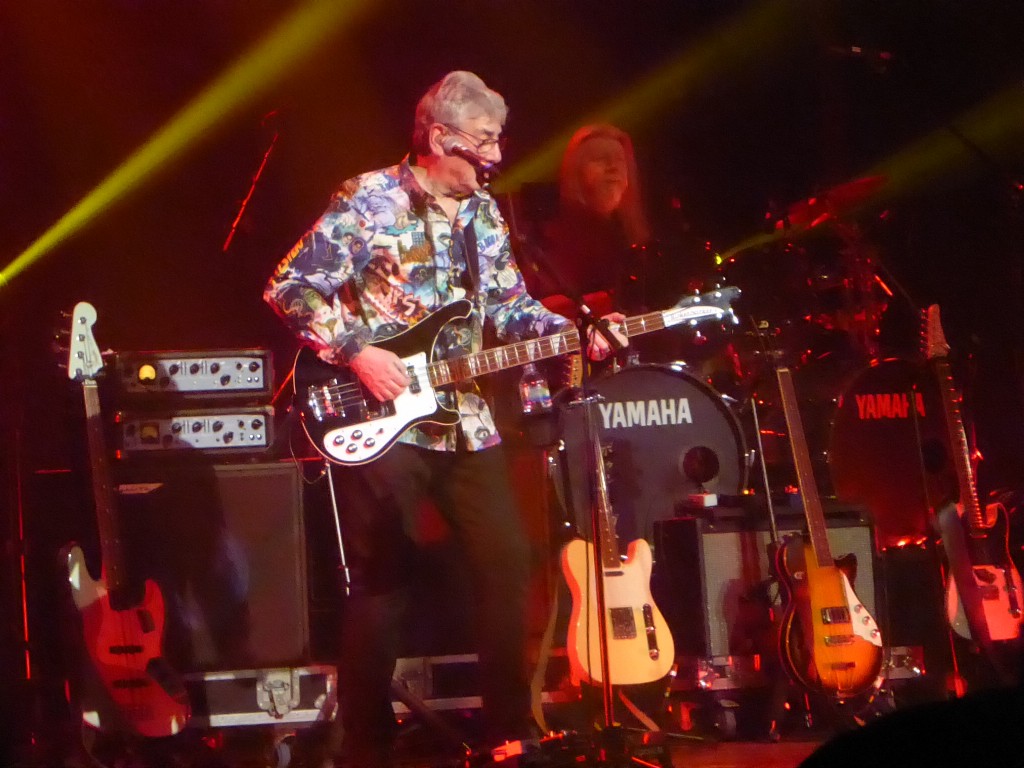 These songs had a dizzying amount going on, never staying in any one place for more than a few bars, but, despite the briefest of brief solo slots for Rick Graham and Paul on the latter, without the long instrumental passages that critics of prog find so self-indulgent.

Although there were some more breezy pop moments, notably ‘Wall Street Shuffle’ and ‘The Things We Do For Love’, it was amazing in hindsight, while hearing the likes of ‘I’m Mandy Fly Me’ that they were big hits with their multi layered complexity.  ‘Silly Love’ was the nearest to heavy rock, but even then featured loads of twists and turns with a cheeky ending ‘and now for something completely silly’. 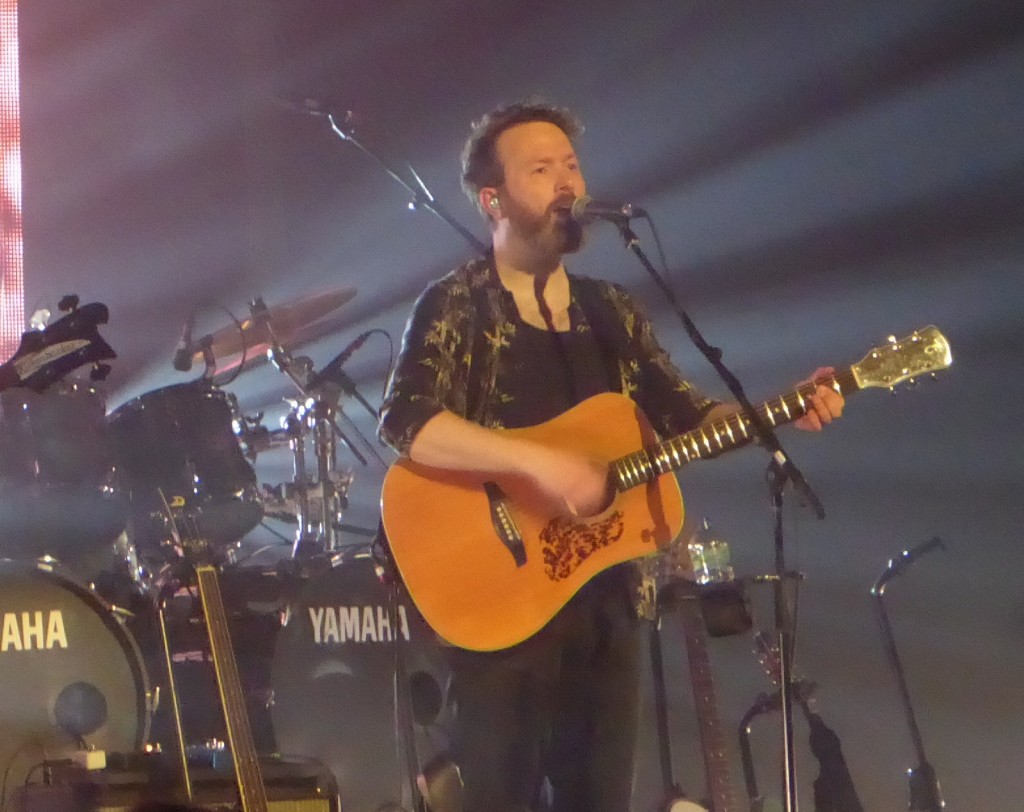 Even more surprisingly there were a couple of new songs, after a fashion. Graham played ‘Standing Next To Me’, a song he had written about touring with RIngo Starr’s band,  sounding very McCartney esque as you might expect from a man who originally wrote hits for the Beatles sixties contemporaries, and he and Iain duetted on the latter’s ‘Say the Word’  which was equally smooth.

‘Somewhere In Hollywood’  saw a guest appearance on vocals of Kevin Godley, albeit via a typically artsy video that the band played in front of, while the album cuts kept coming deep into the set, ‘Baron Samedi’ featuring some jamming between Rick and Graham. 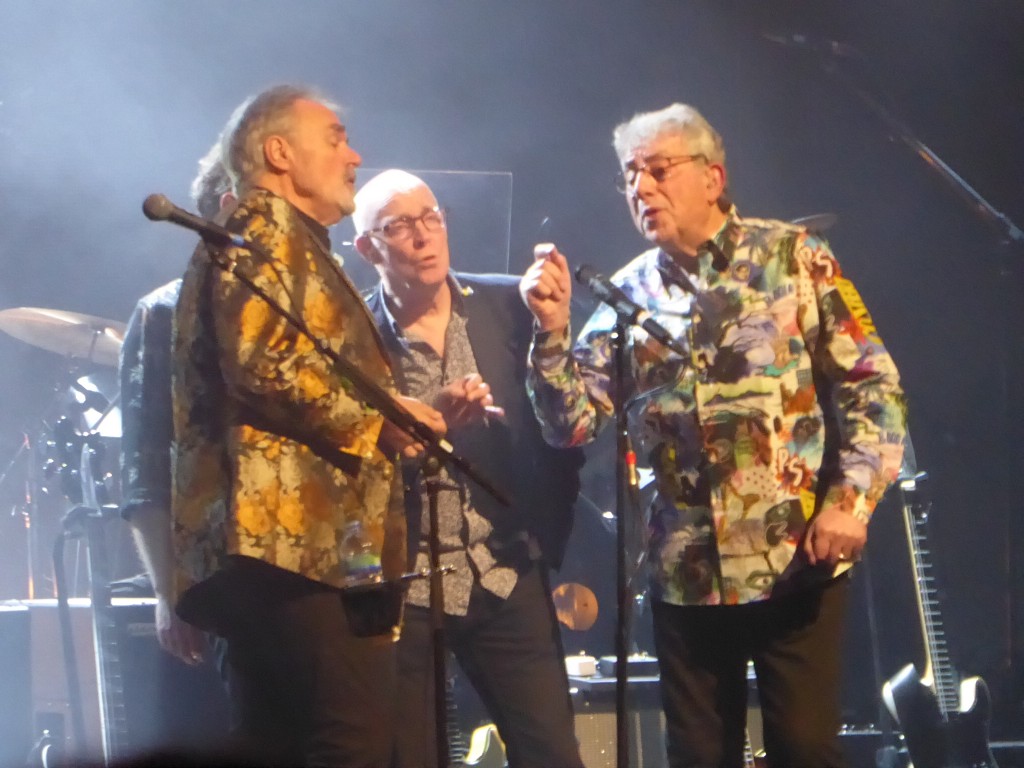 Belatedly they played their No 1’s and the vocal arrangement on  ‘I’m Not In Love’ was as lush  as ever with Iain excelling, the only downside that another  video backdrop of two hirsute lovers rather detracted from the song in which spoke for itself. Then their song perhaps most associated with Graham, ‘Dreadlock Holiday’ closed the set, ending with ‘I don’t like London, I love her’, though was it just me or was the faux-West Indian accent toned down for these more enlightened times?

The bamboozling  diversity  of 10cc’s works was confirmed by the encores ‘Donna’ with acapella barber shop harmonies from  four of the band followed by ‘Rubber Bullets’, the nearest to a conventional  rock out with audience participation on an extended version and Rick moving up to the keyboard stand  to jam with Keith Hayman. 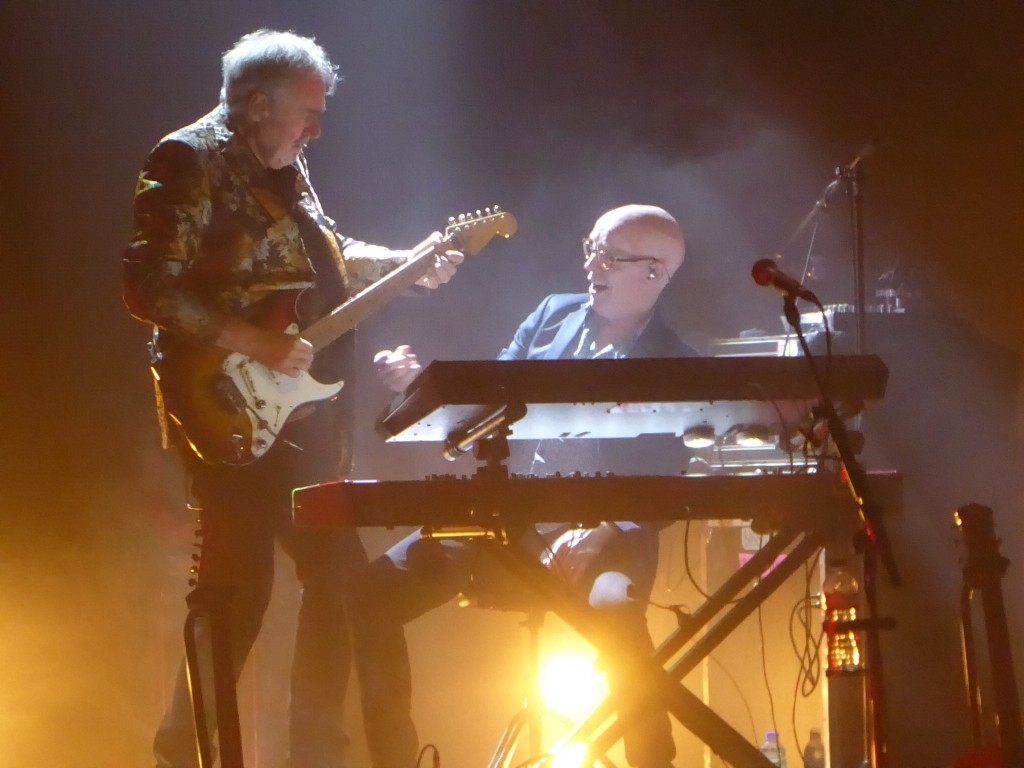 At 2 hours this was far more than the billed Greatest Hits show that I’d previously seen at festivals like Weyfest. It showed 10cc as innovators with a unique style best characterised as ‘progressive pop’, with the emphasis on this night on the former strand, which I hadn’t fully appreciated before.  For as long at the urbane, youthful looking Graham Gouldman is still there to give some authenticity it’s not too late for an ELO style revival.