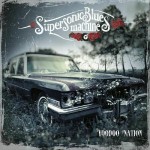 ‘Voodoo Nation’ is Supersonic Blues Machine’s 3rd album and it works hard to make the same impact as its 2 predecessors. It’s a rock solid album with plenty of bluster, but relies heavily on formulaic choruses with overpowering vocal blocks and dropped in harp wails.

The album features an array of guests who bring welcome light and shade, but don’t always sound an integral part of the album as was the case on the band’s debut album ‘West of Flushing, South of Frisco’.

Judged by any other standards this is a fine album, but given the band’s past it’s a restatement of their crossover style to be found on ‘Miracle Man’ (the opening track on ‘West Flushing’), rather than a step forward.

Bass playing band leader and producer Fabrizio Grossi has effectively built his own musical community from the beginning, incorporating guests who buy into his rock, blues, soul, funk, Americana and reggae melange.

The band’s core trio of Grossi (vocal and bass), Kris Barras (vocals and guitar) and Kenny Aronoff (drums) power their way through a dozen tracks with a mix of well crafted grooves and plenty of intensity.

For example, ‘Coming Thru’ could have edited the track at the 3.40 or even 4 minute mark, as a change of tempo means the song limps to the finish line.

The trio are arguably at their best on the single ‘Too Late’, which uses the familiar: “fine line between love and hate” theme, on a buzz saw, riff-led stomp with handclaps.

A warmer guitar break at 2.06 minute mark, injects fresh energy into an over-produced track that cries out for the kind of space and clarity to be found on the funky King Solomon Hicks track ‘You &And Me’.

Joss Smith is also a good example of less if more approach on the muscular B3 laden groove ‘Get It Done’ complete with a punchy hook, a catchy ‘oooh’ refrain and a brief, but soaring slide.

‘Voodoo Nation’s sonic overload sometimes borders on the claustrophobic, as a busy production shoehorns in 8 guests while trying to keeping a coherent identity.

It just about succeeds, via a succession of punchy choruses swamped by choral style vocals that start off as bv’s and then frequently take on a dominant role.

The opening track ‘Money’ is an example of this, as a  piercing buzz saw guitar tone and dry drum sound quickly give way to a significant chanted vocal hook.

Kris Barras opts for a piercing solo, before a sharp contrast between his doctored vocal and some soulful bv’s which are brought to the front of the mix.

It’s a prominent role they occupy on much of the album, such that by the time of dreamy electric piano arpeggio and subsequent tough riff-led rocking of the title track, it’s only a few seconds in before an initial vocal chant.

Happily the song builds a percolating groove topped by a spine tingling female vocal wail that leads us back into the hook. Barras impressively matches this with his own lung bursting range over a thundering finish.

Each guest brings something new to the album, with Sonny Landreth, Joe Louis Walker and Kirk Fletcher arguably being the best fits.

Landreth’s rich slide tone excels on a luscious intro  to ‘8 Ball Lucy’ with a reggae undertow, on a song with an impressive hook, layered keys and a spacey outro.

Joe Louis Walker’s soulful falsetto is the perfect foil for the husky Barras on the percussive sounding ‘Is It All’.  The bv’s enjoy their finest moment too, as they support the song rather than dominate it.  Better still, Kris’s closing fuzz tinged solo evokes Ernie Isley.

By contrast, Kirk Fletcher’s clear tone weaves in and out of a cool soulful blues ballad ‘I Will Let Go’ with a strong choral hook.

This track works so well because it leaves enough space to breath, the opposite of the busy ‘Do It Again’, on which Ana Popovic muscular, big toned solo fills the track with gusto, but adds little to the song.

Eric Gales brings an exotic tone to bear on the 8 minute ‘Devil At The Doorstep’ on which Barras sings the portentous line “Lock up the door, and turn off the light ‘cos nobody’s coming home tonight.”

The backing harmonies and a brief guitar line helps build up the tension, as he adds an exclamatory: “I need to know that he’s gone”, to usher in Eastern sounding tones.

It could arguably have been snipped at the 5.30 minute mark, but that would rob us of a taut guitar line leading into a Floydian sweep, anchored by Grossi subtle bass and topped by Gales intricate playing, before a repeated vocal block and spacey outro.

It’s a song that builds up the tension and draws us in, but doesn’t quite justify its extended playing time.

Charlie Starr’s acoustic train-time beat of ‘All Our Love’ is a welcome stripped down finish – all pristine phrasing, restrained bv’s and handclaps – to book-end a busy album that might require repeat plays to fully reveal itself.

Happily this track provides a perfect reason for doing so.****