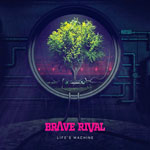 The debut album from Portsmouth rockers Brave Rival places them in a trajectory from Abba via Heart and Fleetwood Mac to Zeppelin.  This should mean at least that the band will appeal to a wide age range.

With two lady vocalists (Chloe and Lindsey) and a third lady Donna on drums, the band have an immediate USP and they certainly deliver.  Donna and bassist Billy Dedman previously played in the band Albany Down.

Back in 2019 Pete Feenstra wrote: “They have strong songs, a jam band feel (think Tedeschi Trucks) and a Grace Slick vocal influence. We wait with baited breath for their debut album. It can’t come too soon.”

Although they have been championed by the blues community the band should really be filed under classic rock for widest attention.  The bluesy flavour is evident on tracks like ‘Come Down’ and ‘What’s Your Name Again’ but elsewhere the band  rock out.  And I’m sure that much of this material will come over much heavier live.

The two vocalists alternate in the songs which makes for variety and there are several standouts including ‘Heart Attack’,  the catchy ‘Guilty’,  and ‘Secrets’.  At times, with their mix of rhythm and rock, they remind me of prime time Never The Bride.

The female vocals take centre stage so the contribution from guitarist Ed Clarke  is supportive rather than spectacular (only on  ‘Break Me’ does he take an extended solo) and the emphasis throughout is on the song and the melodic hook which is never far away.

If you are playing catch-up check out their earlier live album (which duplicates several tracks here), but one of our Breakthrough Acts of 2019 look set for greater things freed of Covid constraint and hopefully genre typecasting.  ****