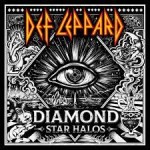 Def Leppard are back after a seven year gap (pretty fast by their standards!) since 2015′s self-titled album, which was rather good.

‘Take What You Want’ starts the album off with all the things you love about Def Leppard – instant chorus, big riffs, guitar solos, the Leppard backing choir.

Those after a glam rock stomp-a-long will love ‘Kick’ and ‘Fire It Up’. The latter possibly the song of the album for this reviewer. ‘Gimme A Kiss’ and ‘Unbreakable’ (harks back to ‘Slang’ in sound & style) are further examples of how they still have that magic touch when it comes to penning rockers with a distinctive pop sound to them. Either would be a good addition to their live sets.

‘This Guitar’ is one of two songs to feature Alison Krauss (the poppy ‘Lifeless’ being the other). Lyrically it has been covered by the likes of Bon Jovi and the Hooters, a tale of how a guitar saved a person’s life. Musically it has a gentle, almost country air to it. Bit different for Def Leppard and Alison Krauss again shows why she is a singer in much demand.

Less said about ‘U Rok Mi’ the better, however, one dud in a fifteen song album is impressive.

They throw it all into the big production ballad ‘Goodbye For Good This Time’, complete with a classical guitar solo. Simply stunning on first and each subsequent listen. ‘Open Your Eyes’ is another good ballad on the album, using those distinctive backing vocals to great effect.

Def Leppard do an ELO on ‘Angels (Can’t Help You Now)’, with plenty of strings and piano helping build the song to a suitably grandiose finale.

‘Diamond Star Halos’ continues a strong streak by Def Leppard and will doubtless be regarded in time as one of their best since their 80′s zenith. ****