On Sunday 5 June, David Randall chatted to Chuck Wright about the new album.

On Sunday 12 June – as part of ‘The Eclectic Mix’ – there was a more in-depth look at Chuck’s career based on the recent interview and tracks from the new album, Quiet Riot, Giuffria and House Of Lords. (See in-line player at the foot of this review). 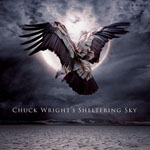 You can be very wrong about an album or, more specifically, an artist.  Chuck Wright, also a respected sessionist, is best known as sometime bass player with metallers Quiet Riot so you might expect his debut solo album to be continuing that musical path.

But no, this album is more prog fusion-y with a super instrumental opener (with Derek Sherinian on keys) which, if nothing else, dispels any preconceptions.  Vocalist Whitney Tai lends her talents to several tracks including the Bjork cover ‘Army Of Me’ whilst guitars are in the capable hands of Lanny Cordola (one time colleague of Wright’s in Giuffria and House Of Lords) amongst others.  Cordola has spent time in war-torn Afghanistan since 2014 teaching children guitar.

‘The Other Side’ features August Young on vocals and is a bit acoustic Led Zep in execution whilst the funky ‘Throwing Stones’ showcases Joe Retta on vocals (Retta was in Steve Priest’s version of The Sweet and with Wright in the band Heaven & Earth).

Whitney Tai is back for two of the album’s highlights, the superb ‘Giving Up The Ghost’ and ‘Time Waits For No One’.  Whilst the use of different vocalists throughout – and indeed aided by stellar “names” musicianship – adds variety, a whole album of Tai and Wright would be interesting.

Jeff Scott Soto comes blustering in on the heavier ‘It Never Fails’ which also features Mr.Big’s Eric Martin and the late Pat Torpey.  To ring the changes ‘Darkness Darkness’ introduces a Celtic vibe (an authentic cover of the Jesse Colin Young song originally performed by The Youngbloods in 1969) and the bluesy ‘Cradle Of The Sun’ has another female, Shelly Bonet, on vocals.

The album is closed by two instrumentals, the excellent ‘Farewell Horizon’ and a more mellow reprise of ‘The Weight Of Silence’.

Wright’s debut is wide ranging in terms of musical palette and it would be interesting whether he continues this approach for a follow-up which I hope materialises.  Especially with Whitney Tai!

Wright has been raising funds for Ukraine and the frontline World Central Kitchen via his jam night residency at Whisky A Go-Go in Hollywood.  Just as admirable as this debut album.  ****1/2