The 1990’s in the UK in pop terms, and indeed charts, were dominated for the most part by Britpop, which these two authors (themselves in a 90s band) provide a broad and entertaining overview of.

Nice style taking a key album with the usual track by track analysis, but also adding a brief biography of each artist, plus optional extras which often details subsequent re-issues and added bonus material on these releases.

Of course Blur, Oasis, Pulp, the Lightning Seeds, Suede and Ocean Colour Scene feature heavily as they were the major Britpop successes, along with some big at the time but possibly forgotten by many including Menswear, Echobelly and Denim. Great to see My Life Story’s ‘The Golden Mile’ get a mention, a ‘must have’ album for any lover of finely crafted chamber pop.

Written by two authors who obviously love the music of this era and they (almost) convinced me to listen to Pulp again.

Entertaining and informative read, which certainly has me off to track down and listen to some of the albums mentioned in this book.  ***1/2 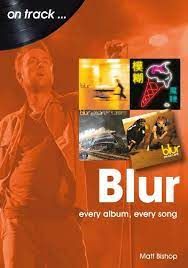 Blur were one of the biggest artists to emerge out of Britpop and the 1990’s, along with Oasis, with whom the press had a field day drumming up the rivalry between the two bands.

The book covers every album and song by Blur, right up to their last album to date, 2015’s ‘The Magic Whip’. Possibly a missed opportunity to cover the band members various solo and band projects like Gorillaz or the large catalogue of solo work by Graham Coxon.

It does what it says on the tin (cover) and will appeal to the casual fan, as it is a personal take on the band’s songs and music, which many ardent fans may not always agree with!  ***