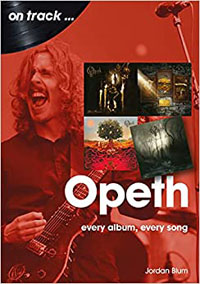 You tend to think of Opeth as one of the “newer” prog metal outfits and then you realise they started out in the late 1980s.  Since that time they’ve released 13 studio albums. Jordan Blum plunders (and credits) a variety of online sources for his narrative.

Given that Opeth are a complex band covering black/death metal, jazz rock and prog metal in their 30 year history it is not an easy task of dissection.  Blum achieves a good balance of critique and compliments (he rates the debut ‘Orchid’(1995) as the weakest album) and in the absence of a published biography a great place to learn more about the band.  ****

It might be overlooked that the frontman of prog rock legends Van Der Graaf Generator has released over 30 solo albums.  And, he is still going strong!  Most recently fronting the band playing UK live dates in February.

Richard Rees Jones book must be commended as the first-ever attempt to distil Peter Hammill‘s extensive output starting with 1971′s ‘Fools Mate’.  He also emphasises Hammill’s eclecticism which, in truth, may have alienated some.  You could call him the David Bowie of Prog because throughout his career he has pushed boundaries and embraced everything from electronica to punk.

Rees Jones epiphany came in the early 1990s when he saw Hammill perform a small gig in the musician’s home town of Bath.  He does a fine job of interpretation.  It’s just a shame that he couldn’t base his book on an interview with the man himself.   Although an index is available online.   **** 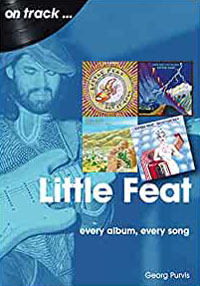 Little Feat are a band I always thought I should get into more than I have.  Will  Georg Purvis’ book make any difference?

The band seemingly picked up more plaudits from fellow musicians than the punters. Perhaps the lack of a hit single and their frontman Lowell George’s descent into drugs and alcoholism didn’t help wider appreciation.  He died aged just 34.

Purvis’ highlights the band’s best moments (‘Feats Don’t Fail Me Now’ (1974) and the live ‘Waiting For Columbus’ (1978)) whilst covering the post-George years.  ‘Rooster Rag’ appeared in 2012 with keyboard player Bill Payne the remaining original member although bassist Kevin Gradney joined the band as early as 1972.

If you need Little Feat let Purvis be your podiatrist.  ****

Can anyone name one song (or hit?) by Laura Nyro?  No, I can’t either.  But the singer songwriter has been very influential, with not least Joni Mitchell and Elton John naming her in despatches.

Philip Ward’s survey will be welcomed, therefore, to give more in depth analysis of her solo output and weaving her story in between (relying heavily on the official biography by Michelle Kort).  Nyro died from ovarian cancer at the age of 50 in 1997 and there have been several posthumous live releases, covered here.

Strangely there’s no reference to the compilation ‘Stoned Soul Picnic: The Best of Laura Nyro’ overseen by Nyro before her death and which is a good starting off place for the uninitiated.

Her first studio album was in 1967 and the singer songwriter was not easy to pigeon hole, hence she has perhaps more of a cult following certainly in the UK.  Her albums mix rock, pop, soul, jazz and even theatre.  Philip Ward’s exposition is enlightening.  ****