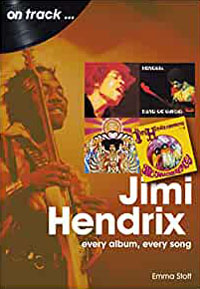 It was my childhood friend Colin Cheesman who introduced me to Jimi Hendrix’s music c.1970.  I was particularly impressed with the screen print he’d made of a classic image used on the Voodoo Chile picture sleeve following the guitarist’s death.  Then came ‘Cry Of Love’ the first posthumous release in 1971.  I wrote a gift token winning summary of Hendrix’s work for the school magazine.  I was hooked, and amassed a considerable collection of albums and books thereafter.

To compress Hendrix into sub-150 pages is not an easy task and especially when – like The Beatles – there have been endless, erudite, analyses of the artist’s work over the years.  Of course, Stott draws on this rich seam of analysis although without providing her list of secondary sources.

As an English teacher, you would expect the book to read well, and it does, and she has not been afraid to add her own flourishes.  Of ‘Purple Haze’: “…the rundown the guitar neck at the close is…either a sigh of exhaustion or thwarted lust…There is no denying the track’s voluptuous carnality…”  Following her literary instincts, Stott also pays as much attention to the lyrics as the music.

She rightly singles out the 2000 multi-disc set as indispensable and also dissects the various “legacy” albums that came out via the Hendrix Estate from 2010.  Before that only ‘South Saturn Delta’ and ‘First Rays…’ (1997) are discussed from the plethora of posthumous releases.

In the 1990s there was a profusion of bootlegs before the Estate got involved and there are some missed opportunities to mention alternate versions that have never appeared officially whilst still remaining valid.  ‘Astro Man’ is a good example which also exists as a rather tasty extended instrumental.

There are many alternative tomes to investigate such as Kevin la Gendre (2020) but the book works as an easy-to-digest overview and first dib, homing in on the main releases during Hendrix’s lifetime as well as the key compilations that followed.  ****