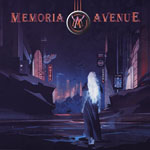 A polished production and neatly tailored arrangements define the early part of the album. In particular, the inviting hooks and AOR subtleties of ‘Stuck’ and ‘Stranded’ sparkle and shine. There’s not an ounce of fat showing. These tracks are sleek, athletic, and light on their feet, with just enough constructed around each melody to make it work.

As producer, Talle does a persuasive job of matching style with substance, cutting the AOR with pop flavourings to enhance the overall sound.

Then, just as we’re thinking Talle could have made more of LeBrandt’s distinctive AOR vocalising, the album truly comes alive, displaying all the urgency and momentum of great Melodic Rock in all its glorious promise. (The PR comparisons to Work Of Art and Palace now begin to make sense).

‘Waiting Forever’ and ‘Nathalia’ have pulse quickening hooks that moodily defer to melancholy. Both are rich in melodic detail, and each is gilded with a catchy, self contained chorus. This is high calibre stuff.

Then you’re thinking that the balladic ‘Sometimes’ and ‘Someday’, brimful of ringing guitars, seductive tones, and climactic choruses are unarguably the standout tracks, only for that notion to be usurped by closing cuts, ‘High As A Kite’ and ‘Picket Fence’.

The first, an achingly yearning love song with a precise narrative clarity, might remind you of James (Australian Crawl) Reyne’s solo material.

The second, an uplifting paean to the collectivist notion that “United We Stand, Divided We Fall”, is a magnificently apposite album closer. A powerfully delivered rallying call to the human race, hitting all its marks without being ingenuous or overly sentimental.

The future looks good for this duo. ****