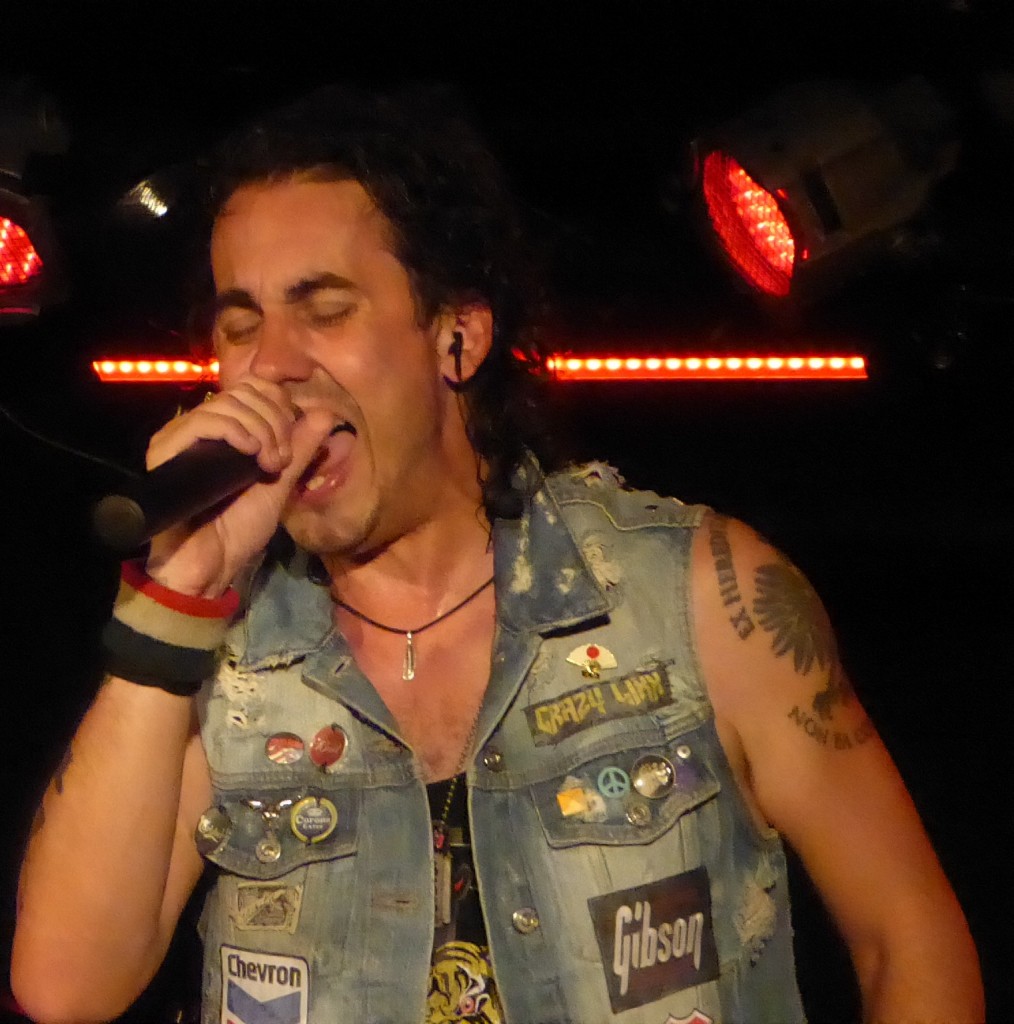 For some 15 years now, Swedes Crazy Lixx have been flying the flag for the American style glam rock they were too young to remember in its late eighties heyday. This is no knowing irony, and you can sense the way they live and breathe it, even in the album artwork inspired by imaginary eighties movies.

Despite some well received appearances at various melodic rock festivals over the years,  their profile is quite low in the UK, reflected in this London date being shifted into the Academy’s smaller  room next door to its main venue, which, as we will discover, was a double edged sword. 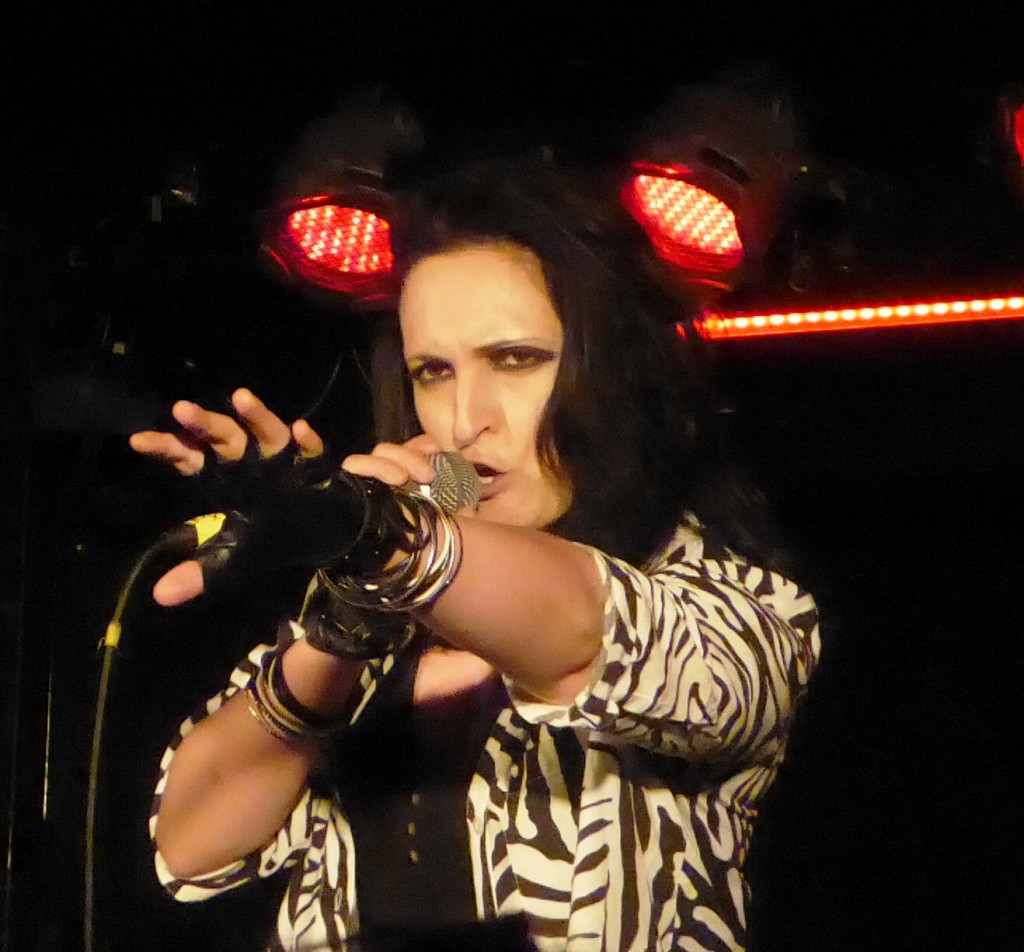 In between albums, singer Danny Rexon also wrote and played all instruments on the debut solo album by Welsh singer Chez Kane, which was an equally eighties inspired work with some anthemic  bangers, which I had looking forward to seeing performed in their natural live habitat ever since the album appeared in the mlddle of the pandemic.

A petite, gutsy figure in a zebra print shirt, with tidy timing she came on stage just as the intro tape of Def Leppard’s  ‘Women’ got to the chorus, and ironically opened with ‘All Of It’, which in style could have been an undiscovered B side from ‘Hysteria’. 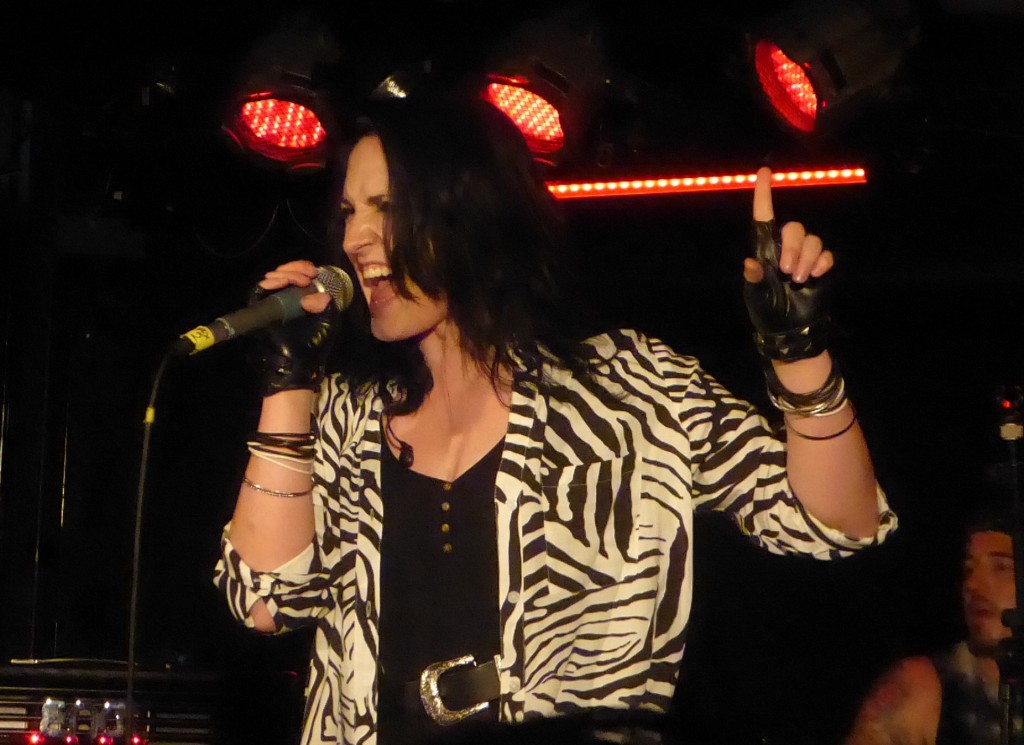 Encouragingly there quite a few pumping their fists and singing along to one of the album’s singles ‘Too Late for Love’, and ‘Ball and Chain’,  with a chorus straight from the pen of Desmond Child circa 1988.

The lead guitar work from Harry Scott-Elliott and the shape pulling James Ready was excellent, but in places the performance was a touch  ragged, notably the big backing vocals which at times threatened to drown out or at least take the focus away from Chez’s own powerful singing.  There were mitigating circumstances with it being one of their first gigs, a limited sound check time having just flown in from Ibiza that afternoon, and a cramped stage. 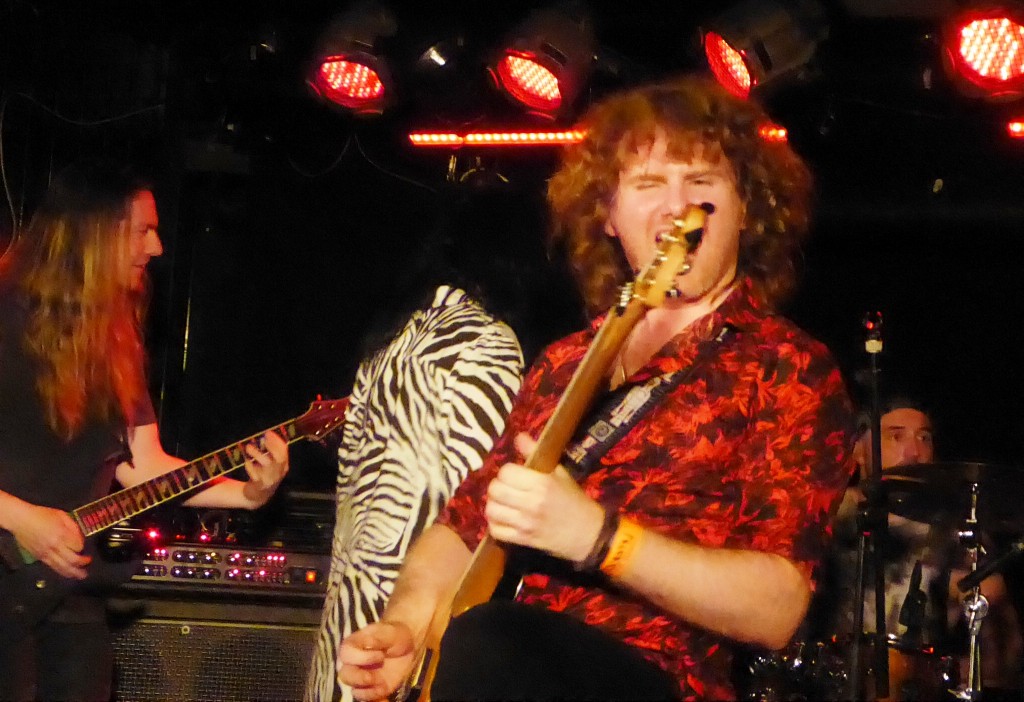 After ‘Die In The Name Of Love’ and the first song Danny had written for her, the AOR-ish ‘Better Than Love’ reminding me of the great Quarterflash, came a surprise as Chez mentioned they were all Mr Big fans (indeed bassist Nico Martin was sporting  a band t-shirt) and an impressively note perfect version of ‘Daddy, Brother, Lover, Little Boy’ was very well received.

The fun, sassy ‘Get It On’ and perhaps the most anthemic of the many such songs on the album in ‘Rocket On The Radio’ ended an impressive but all too short 45 minute set. Fortunately a UK tour has subsequently been announced so this is one bandwagon that hopefully more people will jump aboard. 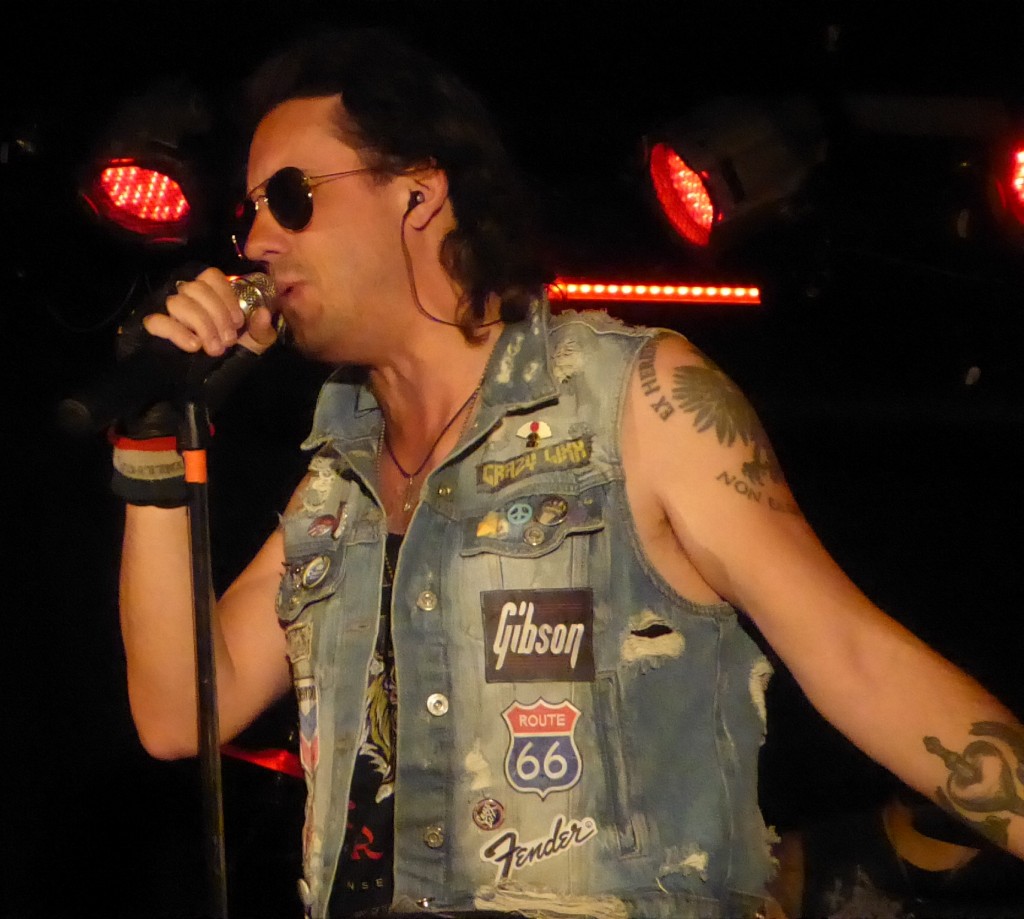 From an early stage the small venue had filled and it was uncomfortably cramped and sweaty – indeed it would have failed any covid risk assessment – when Crazy Lixx came on, opening as they planned to continue with the fist punching anthem of ‘Rise Above’ (oddly one of only two songs from their latest album ‘Street Lethal’).

While ‘Hell Raising Women’ was run of the mill sleaze rock I was delighted to hear the big hooks of ‘Wild Child’ for the first time since reviewing the ‘Ruff Justice’ album while ‘Children of the Cross’ was an unexpected ballad that really grew on me. 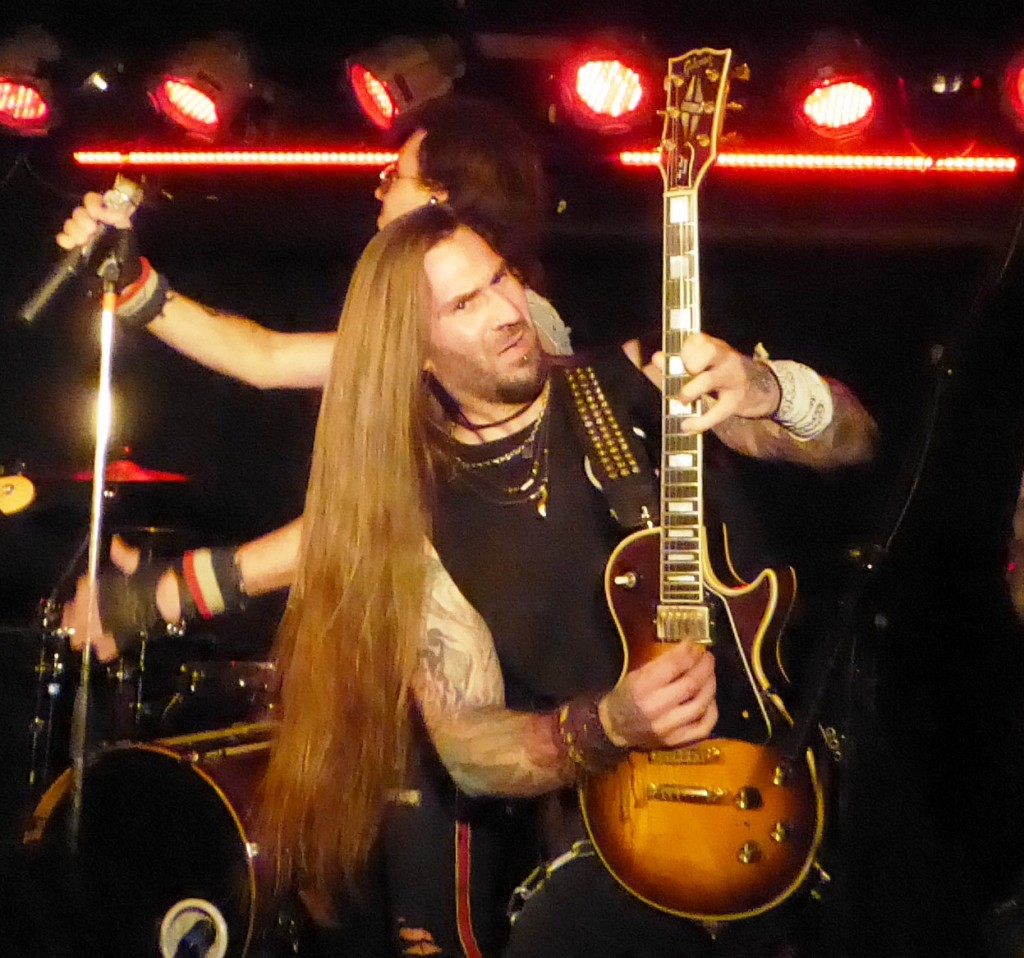 Wearing a denim cut off, singer Danny Rexon worked the crowd surrounded by a towering trio of Adonis-like Scandinavians. The lead guitar solos of Chrisse Olson and Jens Lundgren were excellent , and both they and bassist Jens Anderson were constantly switching positions even on this cramped stage in an arena-worthy manner.

Frantic songs like ‘Wicked’ and good-natured but unchallenging sleaze (‘Girls Of The Eighties’, ‘Rock And A Hard Place’ and ‘Lock Up Your Daughter’) sat alongside some impressively melodic moments- ‘Blame It On Love’ reminded me of Danger Danger, though unrelated to their similar song title- but the recurring comparison, notably on ‘Walk the Wire’ and ‘Silent Thunder’, was with the Pyromania-era Def Leppard, before any remaining rough edges were smoothed off. 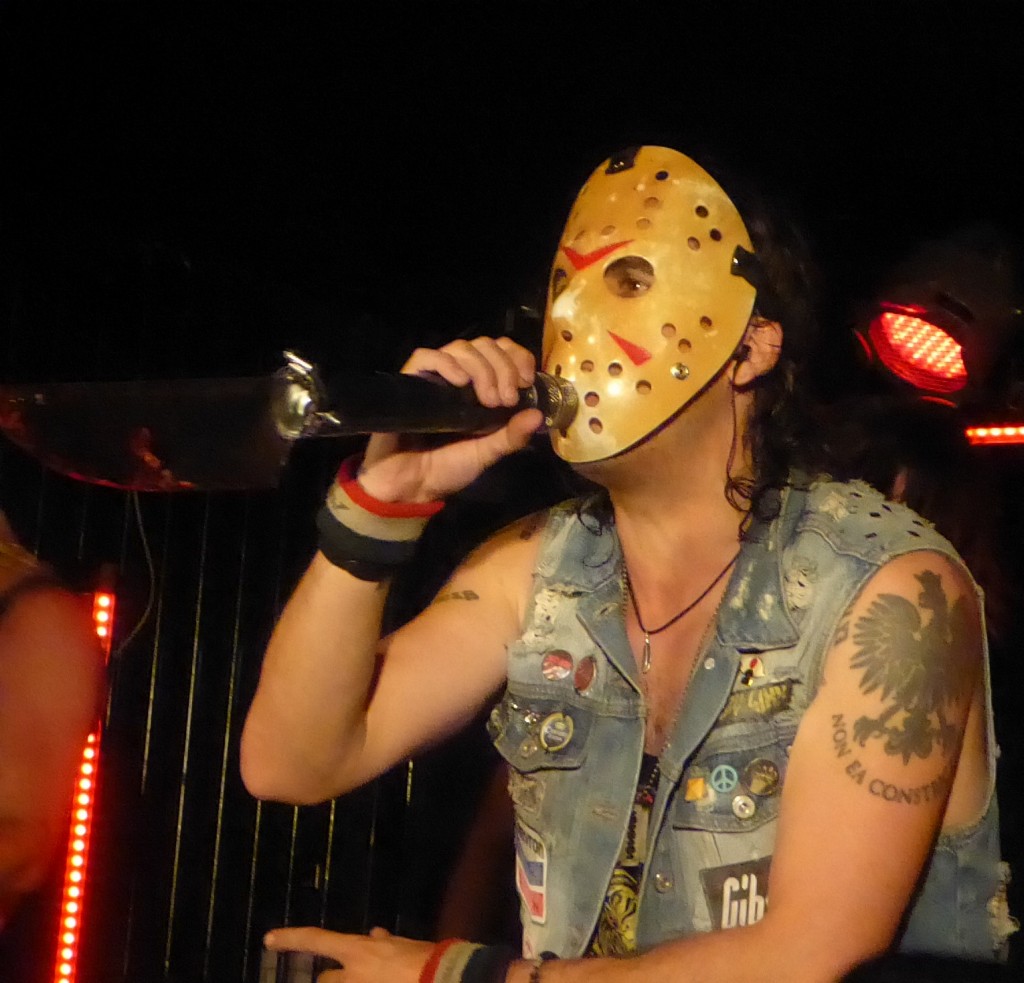 The biggest cheer yet came when, to the song’s twin guitar backing, Danny donned a horror mask and brandished a scary looking scalpel-shaped  microphone during ‘XIII’, the theme for the Friday 13th video game – exemplified by an excitable fan behind me screaming ‘I literally came to this gig just  to hear this’.

The band then left the stage for a good three or four minutes to a backing tape,  leaving people wondering what was going on and whether the heat had become too much – till Danny came back waving  a customised stars and stripes inspired flag to ‘Anthem for America’. Fists were punching but even more so as they closed with possibly their signature song, ‘21 Till I Die’ with a coda of ‘Ain’t No Rest In Rock’n’Roll’.  To their credit they confirmed that creed as they cheerily mingled with fans at the front of the stage before the early curfew. 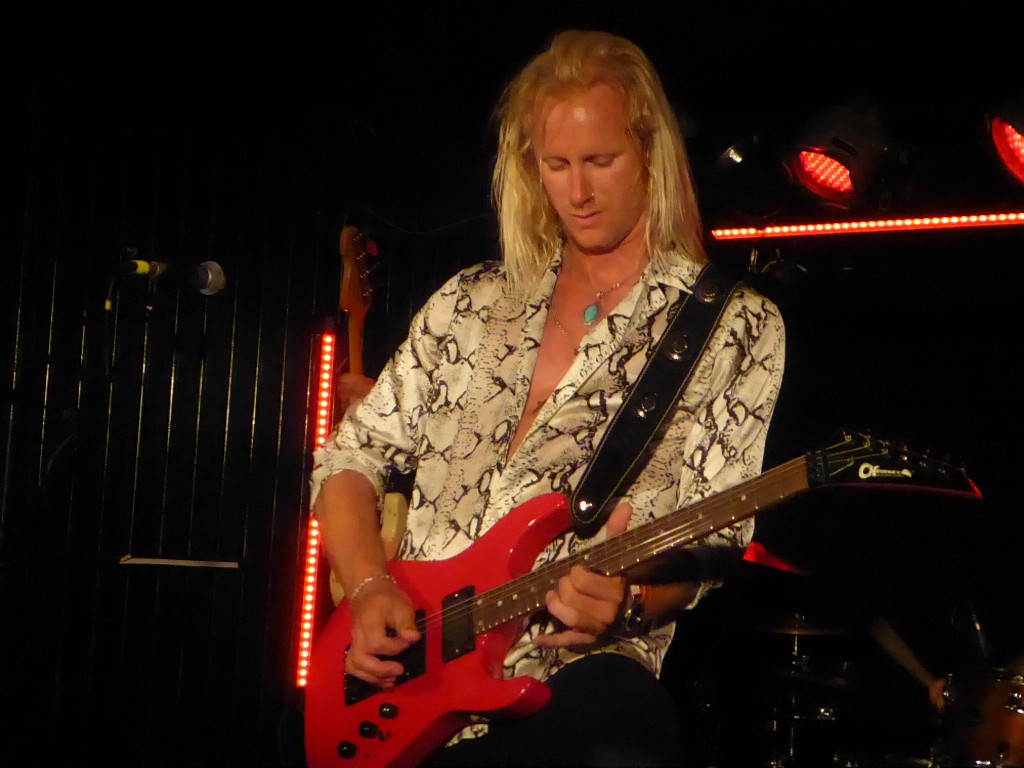 No-one could have been failed to be entertained by their energy and stage presence, and in an odd way the move to a smaller room only enhanced an old school sweaty atmosphere, to match the eighties inspired sounds that both Crazy Lixx and Chez Kane are bringing, both to a newer generation and those of us who fondly remember the original days.