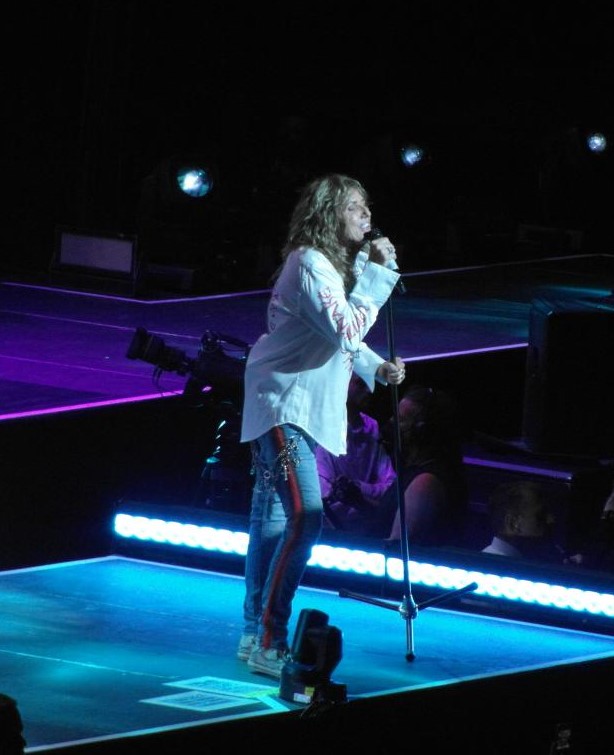 For any rock fan old enough to remember the 70’s and 80’s the music of Whitesnake has been a constant soundtrack. The band may have had a revolving door installed in their tour bus for ease of access as members came and went and the music changed from rocking blues to slick American production, but the quality of product never wavered.

David Coverdale has always had a canny knack of surrounding himself with some of the best musicians in the business and each has added to the Whitesnake legacy which has spanned generations as the age mix in tonight’s crowd ably demonstrated. 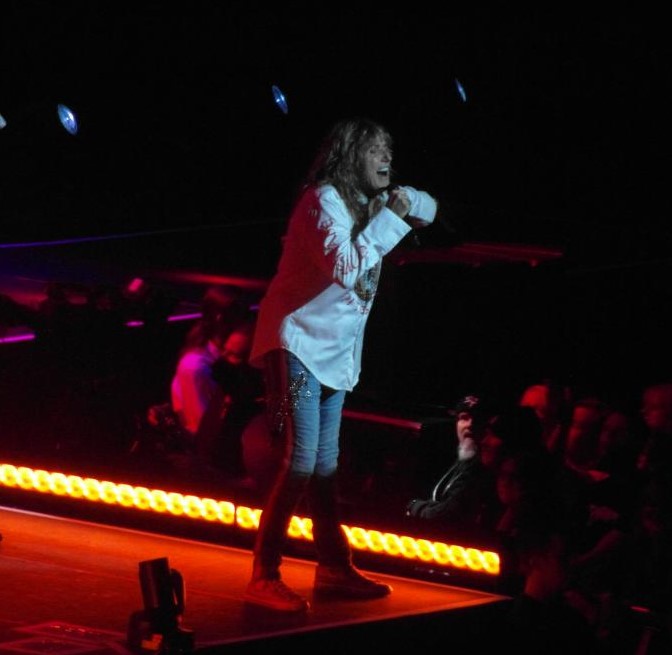 This tour though is to say farewell to all those fans who have stuck by the band over the years as Mr Coverdale finally hangs up his microphone. However, the thought of slipping away quietly into retirement never crossed his mind and tonight was to be a send off in spectacular fashion, complete with another couple of excellent bands in the house to keep the party bubbling.

Europe never fail to deliver and proved to be the perfect hors d’ouvres on tonight’s menu.

Getting things off to a rocking start were Europe. Hitting the stage with ‘Walk The Earth’ the band didn’t put a foot wrong. The ever smiling Joey Tempest stalked the stage, posing and spinning his mic stand in equal measure. ‘Rock The Night’ went down a storm complete with some early crowd participation on vocals.

A feisty version of ‘Scream Of Anger’ from the ‘Wings Of Tomorrow’ album then led into the quiet strains of ‘Carrie’, an 80’s ballad of the highest order. John Norum was then let loose on the heavy riff for ‘War Of Kings’. For those only familiar with Europe because of ‘that’ song, more on which later, it must come as quite a shock on how heavy some of their tracks can be, especially in a live setting. Be in no doubt, Europe know how to rock! 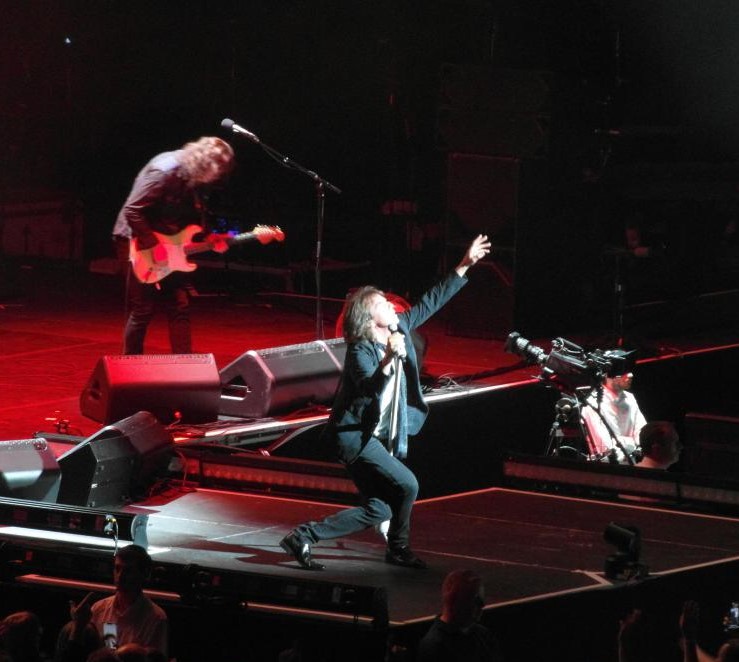 ‘Ready Or Not’ was up next and was quickly followed by my set highlight ‘Superstitious’ which was led by great drumming from Ian Haugland. His bombastic beat then led into ‘Cherokee’ before the familiar strains of ‘that’ song filled the hall. 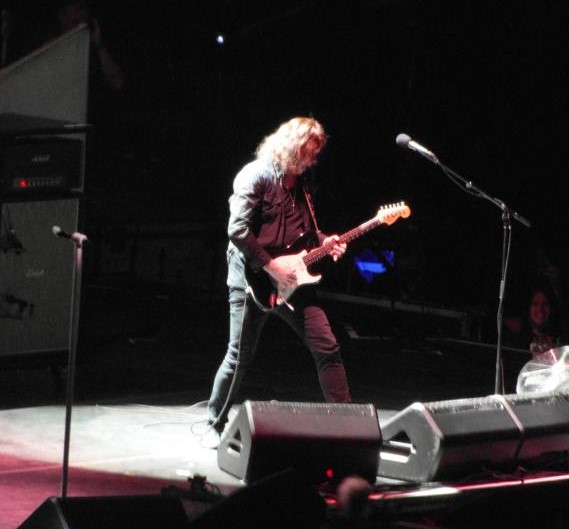 To have such an iconic song as ‘The Final Countdown’ in your back catalogue must be a blessing. You know no matter how the set has gone or how you have been received by the crowd that by the end of that one track all that has gone before is forgotten and the crowd will still be singing the chorus on the bus the following morning. The fact that this was the icing on the cake tonight and that the job had been done long before speaks volumes. Europe never fail to deliver and proved to be the perfect hors d’ouvres on tonight’s menu.

…like finding a bone in your smoked salmon all was not quite to my taste.

Serving up the next course of tonight’s musical feast were Foreigner, but like finding a bone in your smoked salmon all was not quite to my taste. I do have an issue with Foreigner which I have vented a few times now and that is the small matter of extended solo spots and mid song jams shoehorned into a short set. 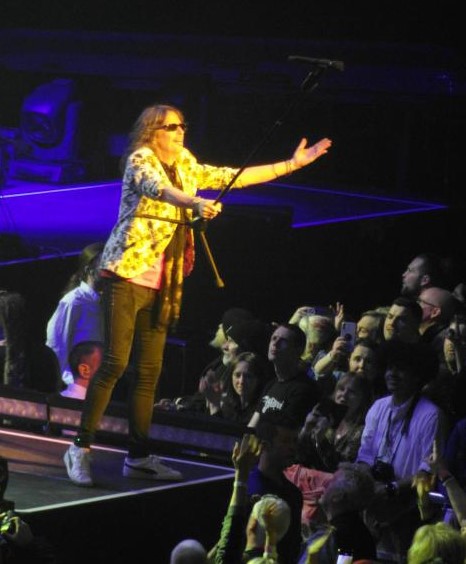 Things got off to the usual great start. Who could argue with the quality of ‘Double Vision’, ‘Head Games’ and ‘Cold As Ice’, each a rock classic. The band were on great form and frontman Kelly Hanson had the crowd in the palm of his hand. More classics followed and the set was flowing nicely.

However, when we reached ‘Urgent’ the guys then headed out into solo territory with both keyboard and drums taking their spot in the limelight. For me this then killed the momentum they had built to that point. This was further hampered with an overlong version of ‘Juke Box Hero’ which went on so long you got a surprise when the melody finally kicked back in. 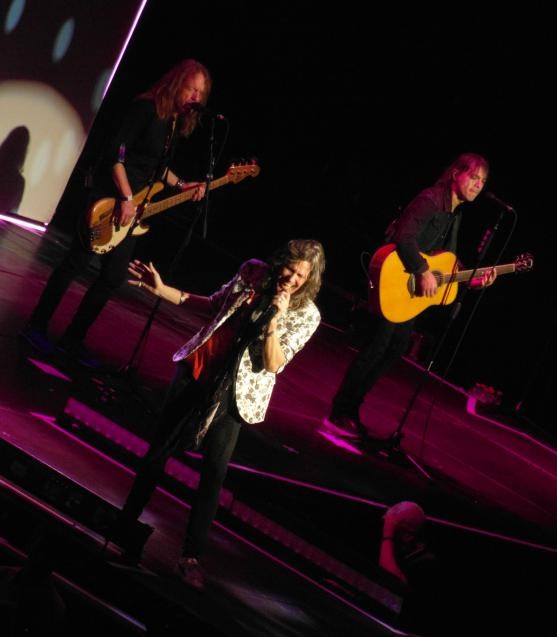 Kelly then introduced to the stage Mick Jones for the last few numbers starting with ‘Long, Long Way From Home’ where he took the lead and this short, sharp rocker helped restore some of the lost momentum. This continued with the introduction of another 80’s classic ‘I Want To Know What Love Is’ complete with mobile phone lights held aloft and a mass singalong in the chorus. 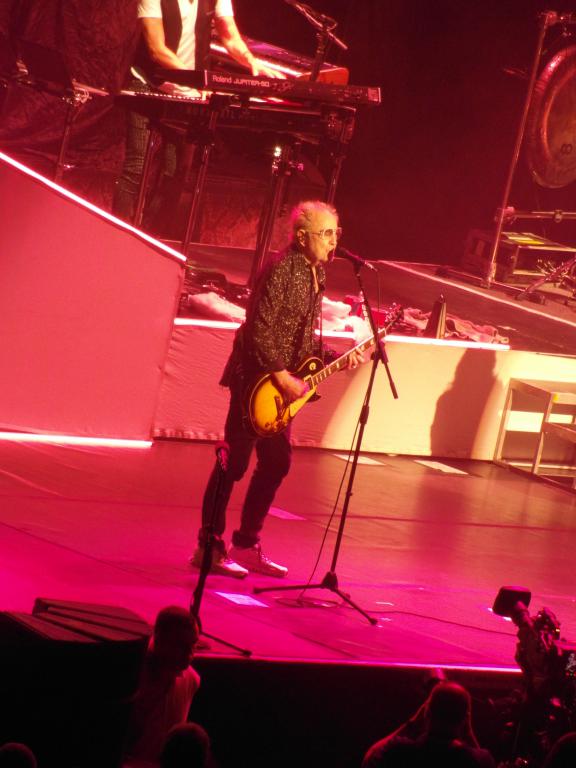 The set was then rounded off with the familiar strains of ‘Hot Blooded’ and Foreigner managed to grab victory from the jaws of self-inflicted defeat. I do love Foreigner’s music but for me they need to cut down on the padding, especially in a support or short festival set, fit in another couple of songs and keep the momentum going guys. If you want any pointers on this you could do well by watching tonight’s headline act…

…a masterclass in what a rock show should be.

David Coverdale is, was and always will be one of the best rock frontmen. He knows how to control an audience and make everyone feel like he is singing directly to them, even in a cavernous shed like the Hydro. He is nothing though without a class band to belt out the hits and the current crop of musicians are more than up for the task. 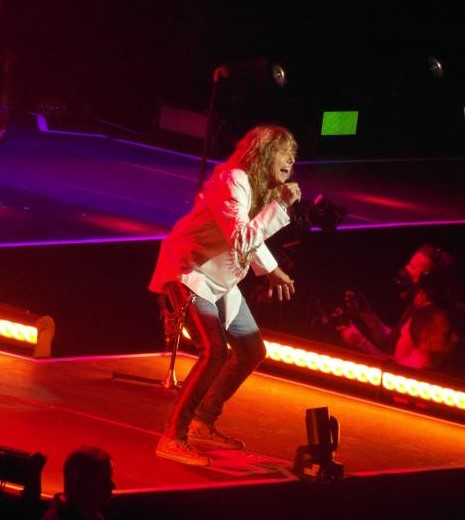 Opener, ‘Bad Boys’, set the stall out for the night complete with the traditional Coverdale cry of ‘Ere’s a song for ya!’. ‘Slide It In’ and ‘Love Ain’t No Stranger’ then kept the pace up and the hits flowing. Coverdale was front and centre on the extended stage ramp and was in good voice although there was a backing singer on stage to help things along and, of course, the Glasgow choir was always more than happy to belt out the vocals when required.

The pace of the show was relentless with very little downtime between songs. Things were brought up to date with ‘Hey You (You Make Me Rock)’ from the band’s last studio album ‘Flesh And Blood’ before ‘Slow and Easy’ gave the crowd another chance to sing along with every word. 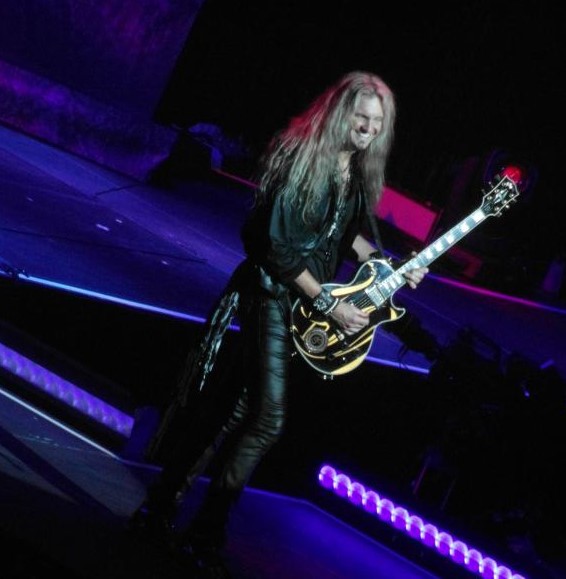 There are two things that guarantee any band playing in Glasgow assured success. One is playing a snippet of ‘Scotland The Brave’ during the set, but Mr Coverdale chose the second option by reminiscing about the much missed Glasgow Apollo and talking about both the crowd and the height of the stage.

A huge cheer went up at the mention of the good old days and the late lamented Apollo and he then had the crowd in the palm of his hand. The fact that this led into a mass singalong version of ‘Ain’t No Love In The Heart Of The City’ was merely icing on the cake. 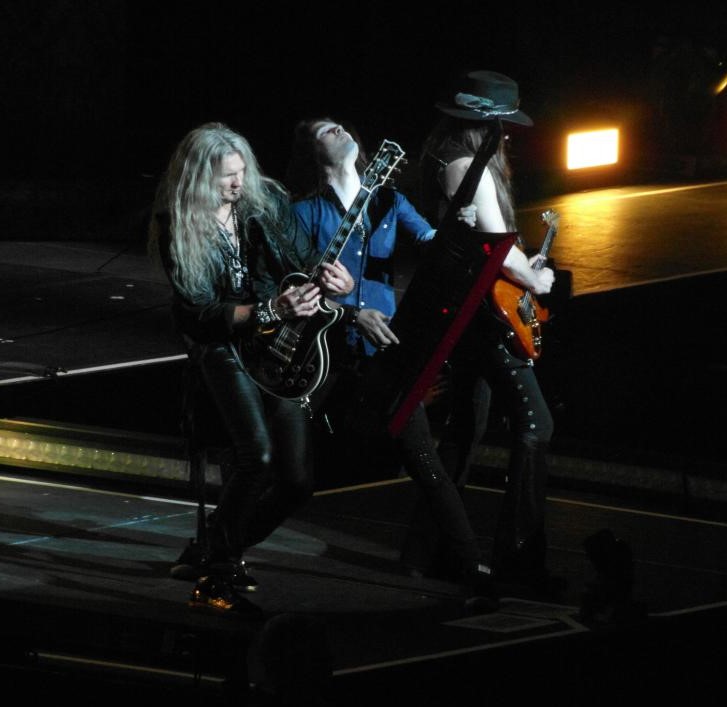 ‘Fool For Your Loving’ gave the two guitarists an opportunity to show off their fretboard skills. In Joel Hoekstra and Reb Beach, Whitesnake have two of the best guitarists of the moment. Both are exceptional players and both are great showmen, who are the perfect foil for Mr Coverdale.

With their solo slots there was no drop in tempo or loss of momentum as there had been with Foreigner’s set. The solos were short, sharp and played as part of the set instead of as an aside and even keyboard player Dino Jelusic joined in on his keytar with all three taking to the stage ramp for a final flourish.

One song I was very happy to see on the setlist was ‘Crying In The Rain’ and it didn’t disappoint. Even with Tommy Aldridge’s drum solo in the middle it turned out to be a highlight of the night.

After David ran through the band intro’s including the latest addition, Tanya O’Callahan on bass, the pace then dropped for a crowd-pleasing rendition of ‘Is This Love’. As 80’s ballads go they don’t get much better and again the crowd sang every line with misty eyed nostalgia. 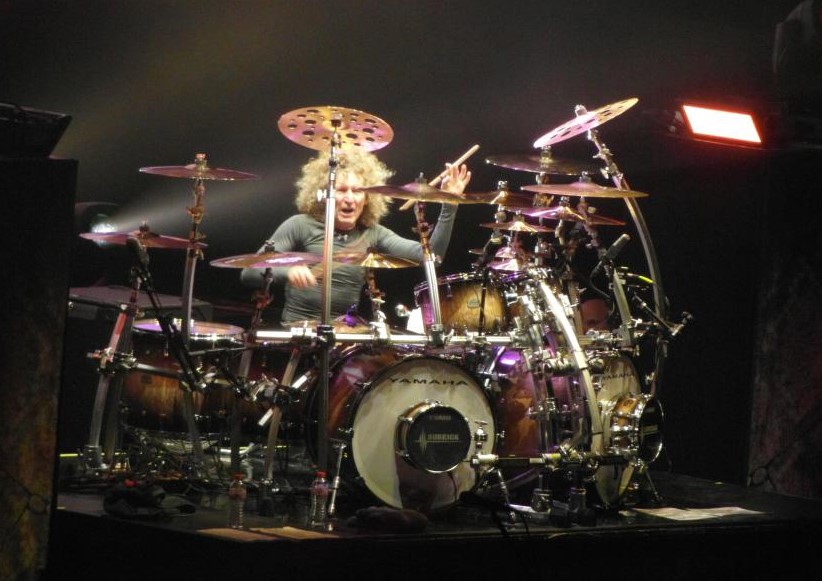 We were now on the home straight and the pace was upped once more with ‘Give Me All Your Love’ before ‘Here I Go Again’ set the Hydro alight, this was classic rock at it’s very best and the crowd were loving every minute. Only one song could top that and ‘Still Of The Night’ brought a storming set to a close with Coverdale revelling in the well deserved cheers as the last bars rang out. 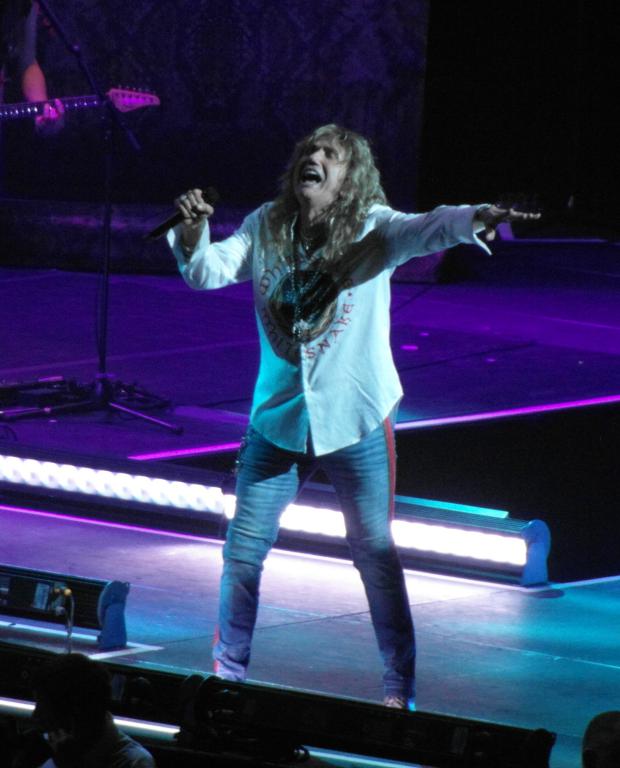 They weren’t quite finished though and a blast through ‘Burn’ finally brought the evening to a close and rounded off a masterclass in what a rock show should be.

If this truly is the final Whitesnake tour then what a way to bow out! The legacy the band leaves behind is huge and this gig only served to cement the fact that David Coverdale is one of the all time great frontmen and that Whitesnake will be sorely missed.

David, we wish you well…