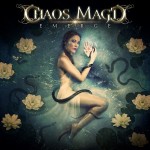 This new release,Emerge, is a second collaboration between Nix and one of Frontiers’ South American songwriter/producer wunderkind, Nasson. The first, Furyborn, was released in 2019.

Nasson’s production is so in your face that you constantly raise your hands to swat it away. It’s big, It’s loud. It seems maxed out on ideas, and so he fills the gaps with prefabricated moves, and knocks out the thundering bass beats like a symphonic metal morse code, but the message is never clear.

Most tracks here are weighed down by this rinse and repeat approach to the production and arrangements. Shame, as Nix is a versatile vocalist. Her sweet falsetto can do the heavy lifting even in the most macho of metal environments. As she shows us on ‘The Impossible’, rescuing a decent tune and chorus from the grip of a suffocatingly strident production.

Equally, she can deliver a song with a steely conviction and purpose, grabbing onto the the early promise of the classy ballad, ‘Garden Of Winter’ with both hands.

Nasson eventually throws several kitchen sinks worth of overdone arrangements at the song, but this is ably resisted by Nix, treating the narrative – full of sentiment – with an appropriate robustness, giving the song a classic, doom laden quality.

And so it goes throughout the album. Several tracks, like ‘Victims Of Our Heaven’ and ‘Beneath Your Skin’ explore no new territory and aim at no new targets, recycling old ideas. Then ‘Beyond The Silence’ and ‘Days Of Lions’ pop up, confounding our expectations, as Nix’s voice swoops and soars, adding nuance and subtlety in the face of the production’s rumble and thunder. **1/2