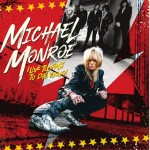 Even long time fans will be approaching this release with caution, uncertain if Michael Monroe remains just as provocative and influential as he once was. That whole Punk/ Glam/ Rock schtick wears thin eventually.

It doesn’t take long to realise that his voice can still deliver a rock song with lusty, ragged edged bravado. And that he still has the ability to write memorably melodic tunes, loaded with heavily charged lyrics, full of personal insights and wide ranging social commentary.

All the usual suspects are here, Steve Conte, Karl Rockfist, Rich Jones and Sam Yaffa. What’s great about this band is that nobody feels the need to outdo Monroe. They’re the man’s backing band, no more, no less, widely respected and eminently durable.

Monroe was only 5 years old during the sixties’ social phenomenon that came to be known as ‘The Summer Of Love’. Looking back, he sees things differently now. “you want a revolution, you got to get up off your ass, the counter culture’s fading fast”. That never-too-late observation, plus a a brief stop midway for a slo-mo hymnic salute to their glory days, confirms why Monroe deserves his place as one of today’s finest post-Glamrock musical artists.

The track is a mesmeric album entry point, setting the mood and scene for further life lessons with ‘Young Drunks And Old Alcoholics’, delivered with a welcome blitz of low slung, springloaded guitars.

Two tracks stand out further. Blazing barroom stomp ‘Can’t Stop Falling Apart’ rides an epic wave of glammed up, mid seventies rock’n'roll, with the emphasis on the “roll”. And ‘All Fighter’, a punchy, and indeed punky rock song with a bruising chorus that just edges it over ‘Derelict Palace’, a slim cut slice of gothic rock.

That said, ‘Everybody’s Nobody’ story of a fallen star, told with a tinge of sadness and a dark, wry sense of seen-it-all humour, might just be the one to register a decent sized blip on the radar of today’s popular culture.