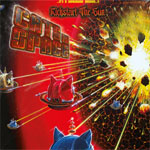 For the past few years, Cats in Space have been one of my favourite ‘new’ bands, offering something very different to the norm. These seasoned musicians have created a lavishly arranged sound inspired by a variety of soft rock acts from the second half of the seventies but with its own unique musical and lyrical character.

I thought their fourth album, and first with new singer Damien Edwards, ‘Atlantis’ was a big step forward from its immediate predecessors and rivalled their debut for impact. However word emerged when they curtailed last autumn’s touring schedule that they were planning something rather special.

‘Kickstart The Sun’ is the result and everything has been thrown at what is their biggest effort yet in terms of scope and ambition. It is a double album, though only just over an hour in length, with a variety of guest artists including pedal steel guitar legend BJ Cole and brass, horns and strings. 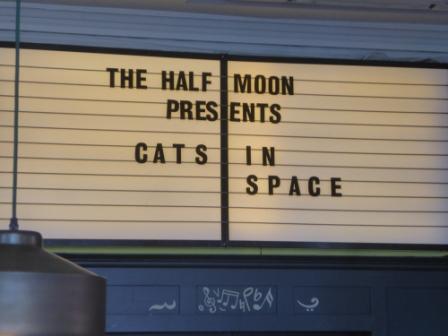 GRTR! attended a special launch event where journalists and VIPs were given an exclusive peak of the album at the Putney Half Moon, apposite as it was there they staged their debut gig in January 2016.

The band’s confidence that even we jaded hacks would be bowled over was not misplaced and subsequent listenings have only confirmed those favourable first impressions.

An introductory taster of the title track with a big harmonised rendition of its ‘turn the light on’ chorus leads into ‘King Of Stars’, a seven minute epic of the type I thought I’d never hear again.

Damien’s vocals soar over some very Styx or Queen-esque harmonies and complete with prominent synths and guitars exploding late on, the overall effect is that it is 1978 all over again with a song that sits alongside Styx and lesser known pomp legends like Zon, Touch and Roadmaster.

Lead off single ‘Poke The Witch’ attracted attention for a tongue in cheek video but this should not be allowed to obscure a very good song more in the usual Cats in Space tradition, complete with wry lyrics, with keys and lush harmonies but also a twin guitar solo from Greg Hart and Dean Howard.

‘Teenage Millionaires’ is heavy by their standards, reminding me of Sweet with a touch of Roger Daltrey in Damien’s edgier than usual  vocals, while ‘Goodbye To The American Dream’ is another with strong Styx  influences musically and lyrically, and with its added horns could have been a missing song from ‘Paradise Theater’.

Then ’1,000,000 Miles’ is the first ballad on show with Damien’s voice soaring expressively over a big, lush arrangement also including the sweetest of guitar solos.

The almost impossible task of following that run of classics falls to a couple of more typically CiS songs: its jangly guitar motif (is that a Rickenbacker?) gives ‘Fifty One Pillow Bed’ something different while there is another twin guitar break, and, driven by the prominent piano of Andy Stewart and some female backing vocals, ‘Charlie’s Ego’ is a typical lyrical tale of a faded seventies star (inspired by a real person, we heard at the playback).

Side 2 begins, as did side 1, with an epic in the title track which over a glorious six minutes builds from a slow opening, with a Boston-esque arrangement and multi-tracked harmonies.

One of the joys of a CiS album is spotting familiar influences, and the intro to ‘A Big Balloon’ which boasts more fine harmonies, albeit more restrained, reminds me of ‘Northern Lights’ by Renaissance.

Though one of the more straight ahead numbers, ‘Smoke and Mirrors’ was ticking a lot of my personal boxes, its stabbing keyboards combining with a riff in a way which reminded me of late seventies Toto and Foreigner,  allied to a big wall of backing vocals and a wah-wah guitar solo.

There is a momentary drop in intensity with the second ballad on the album in ‘Hero’ and the jaunty ‘Last Dance Saloon’ driven by a ‘Rubber Bullets’-like backbeat and an ELO-esque string arrangement. But a third epic closes the album in ‘Bootleg Bandeleros’ where all the album’s influences come together over eight minutes with musical twists and turns that never stay in the same place for long.

The second half in particular boasts Boston-style handclaps leading into the chorus, alongside some of the finest guitar work on the album, before a brief reprise of the title track.

The ambitious production of chief songwriter Greg Hart and Ian Caple does justice to the songs and the overall impression is that the sound is noticeably tougher than previous releases with a greater nod towards the original pomp rock and AOR behemoths from either side of the Atlantic.

That automatically makes me biased, but I am struggling to keep my usual rule of avoiding hyperbole. For me this is not only their finest work to date but is nothing less than a masterpiece. *****