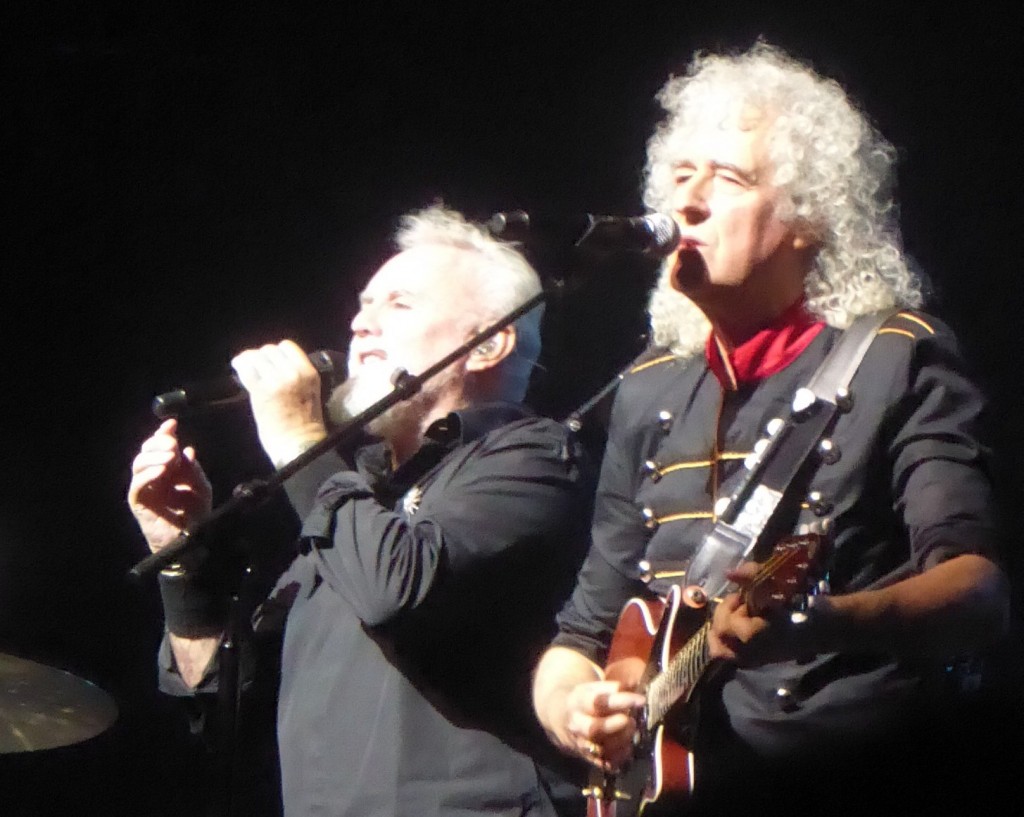 Nearly 50 years since they first emerged, there seems to be an endless  appetite for the music of Queen- just look at your Freeview channel schedules packed with documentaries or archive concerts. Indeed public interest in them reached arguably its greatest ever peak with the worldwide success of 2018’s ‘Bohemian Rhapsody’  biopic.

Only a year before I had seen them at Wembley Arena and yet when these 02 shows were announced (prior to a two year delay because of Covid) seat prices seemed to have doubled overnight in response to this renewed interest. I wasn’t sure whether to go, but after reading rave reviews managed to get slightly more reasonably  priced standing tickets for the ninth of the ten show residency. 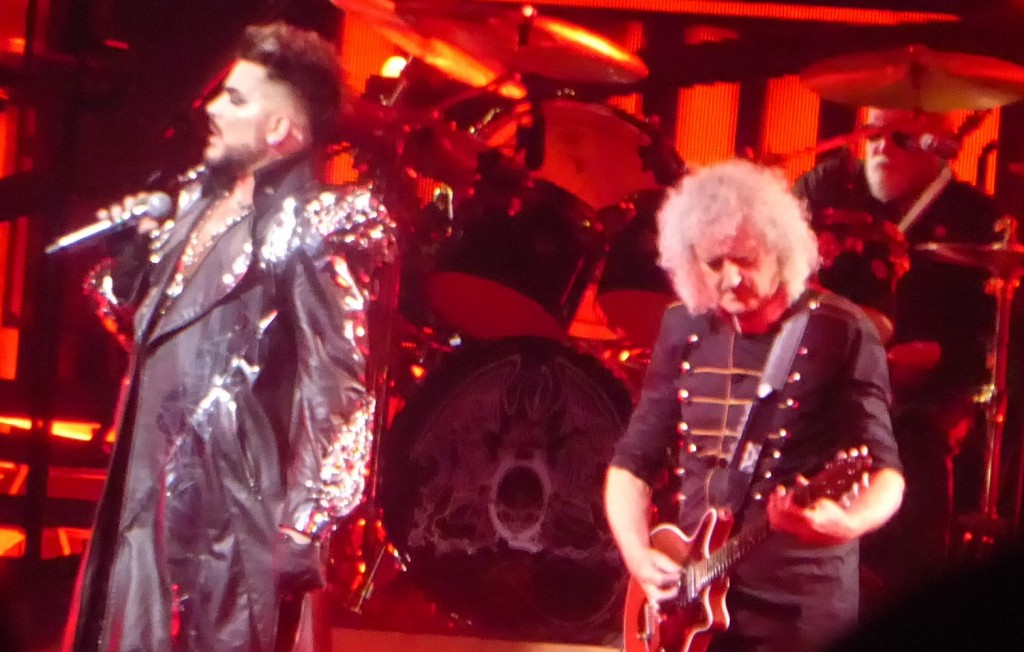 I was expecting a spectacular show from behind the curtain but there was a rather muddled beginning as what were holograms of Brian May and a top-hatted Adam Lambert appeared, only for their real equivalents to burst into life from different parts of the stage.

The opener was ‘Now I’m Here’, normally one of my all-time favourite Queen songs. Here though it not only felt a bit disjointed, but I suspect my preference for earlier Queen material over their pop hits made me in a minority, at least among this mixed audience as opposed to GRTR!’s core readership or indeed the crowd at Roger Taylor’s solo show last year, which shared many of the same personnel.

For the same reasons it felt like I was the only one punching the air and singing along to ‘Tear It Up’ which segued in medley fashion,  via ‘Seven Seas of Rhye’ and the first of those massive vocal harmonies, into another of those all too rare hard rock cuts from the eighties in ‘Hammer to Fall’,  though I missed the old Freddie ‘give it to me one more time’ sign off. 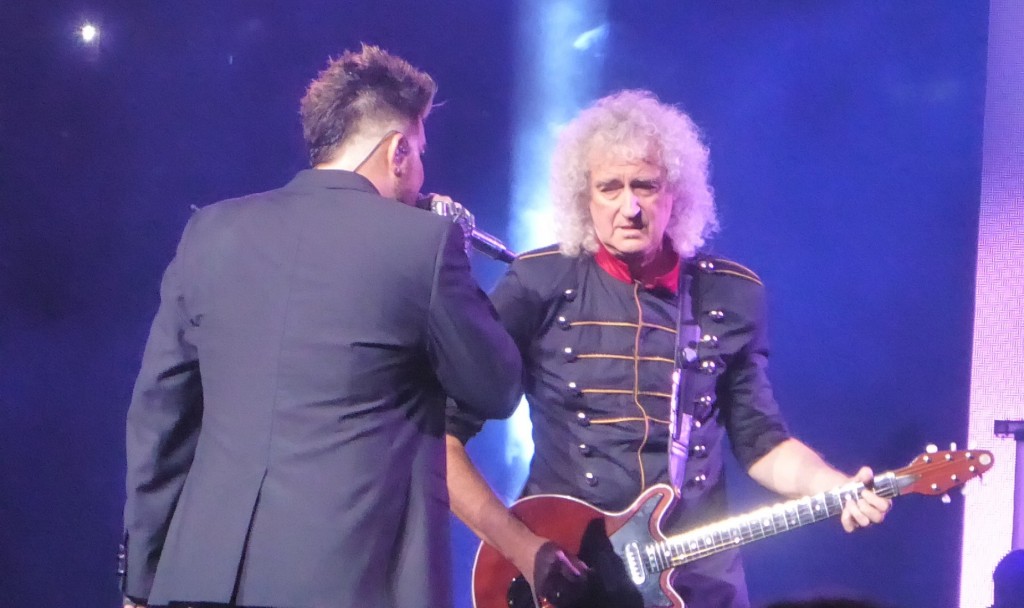 ‘Somebody To Love’ played more naturally to Adam Lambert’s theatricality and during ‘Killer Queen’ he was fluttering a fan archly before introducing the crowd. The American struck exactly the right key, modestly  enthusing over his honour to play with such legends but that he could never try and replace Freddie Mercury. That is true, but only a man of his extraordinary charisma,  flamboyance and self-assurance could thrive in the task rather than be overwhelmed by it.

‘Don’t Stop Me Now’  really warmed the crowd up for the first time in the night then another surprise saw the original stage set fall apart around Adam during ‘In The Lap of The Gods’. A new one emerged for Roger Taylor’s trademark ‘I’m In Love With My Car’ (as mocked in the film!) at the end of which a Queen petrol pump was projected before Adam emerged on the walkway spreadeagled astride a motorbike during ‘Bicycle Race’, segueing into the equally politically incorrect ‘Fat Bottom Girls’ as it was Brian’s turn to venture down the catwalk, soloing on his trusty red special. 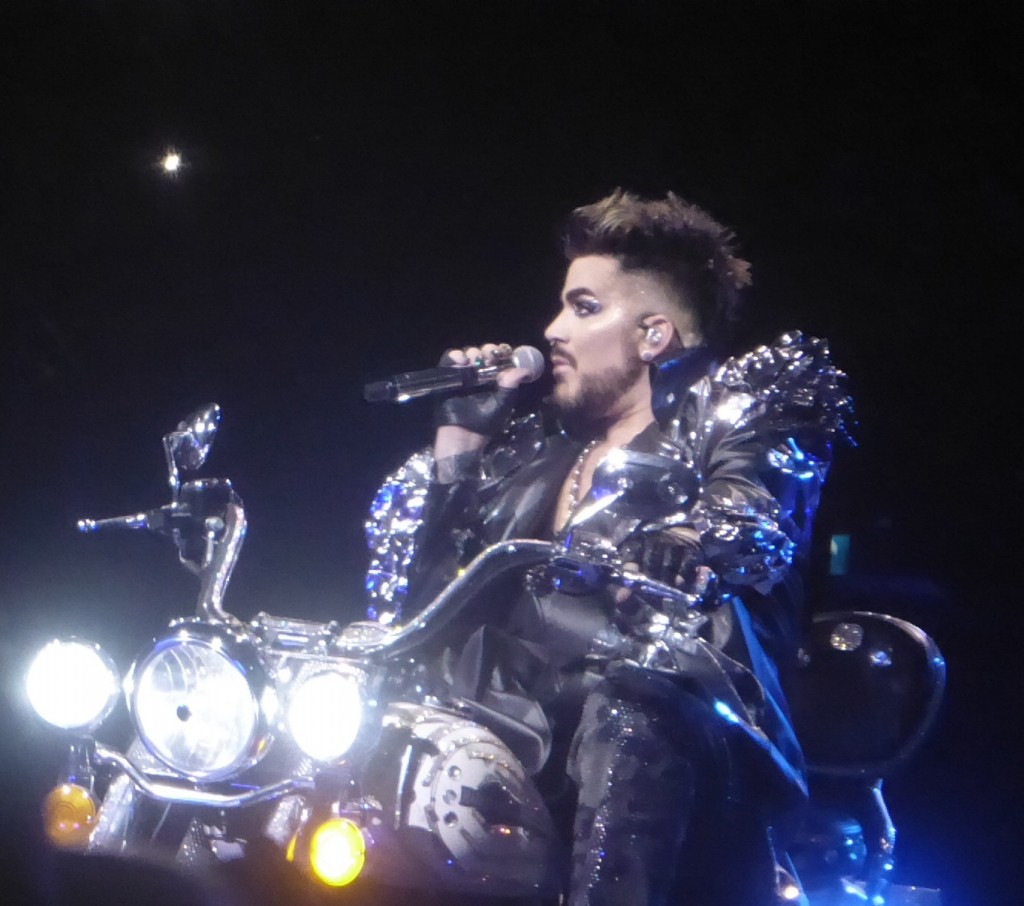 The set moved into the eighties with the contrasting pair of ‘Another One Bites The Dust’ where I was surprised not more were up dancing in the seated areas, and an anthemic ‘I Want It All’ given fresh life by a fast and furious solo from Brian. That led into the hirsute guitarist’s solo slot with a cheeky rendition of ‘Maybe It’s Because I’m a Londoner’ leading into ‘Love of My Life’ with the crowd taking over most of it, then a hologram of Freddie emerging alongside him on the big screen for a touching cameo, then after some joking about time travel  ‘39’ got people clapping along.

He was then joined out on the walkway by the grey bearded figure of Roger who delivered the affecting ‘Those Are The Days Of Our Lives’ in a rather Stewart- esque rasp, before Adam came on stage in a kilt for ‘Crazy Little Thing Called Love’ which saw the greatest volume of seated people to their feet yet, then as a dedication was made to Taylor Hawkins and bassist Neil Fairclough ventured part way down the walkway for his one moment in the spotlight, as ‘Under Pressure’ saw the drummer and singer duet. 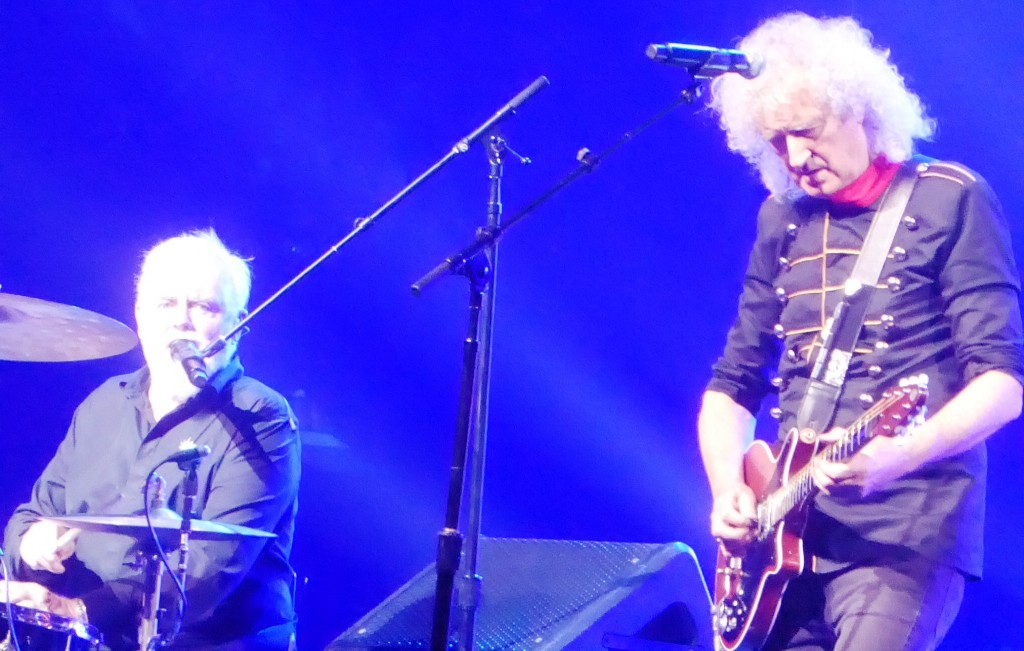 The rest of the set had something for everyone with all facets of Queen represented. Adam took the spotlight to show his remarkable soaring range on a near acapella ‘Who Wants to Live Forever’ and to a lesser extent ‘The Show Must Go On’ (though I still think that was one of the Queen songs on which Paul Rodgers excelled).

Brian was given a lengthy guitar showcase which began with him hoisted atop a giant crater onto a backdrop of outer space, saw him interpret Dvorak’s ‘New World Symphony’ (aka the Hovis ad for us children of the seventies) and ended by breaking into ‘Tie Your Mother Down’ which, as one of the rare songs not suited to Adam’s voice and only played in part, was a relative disappointment. 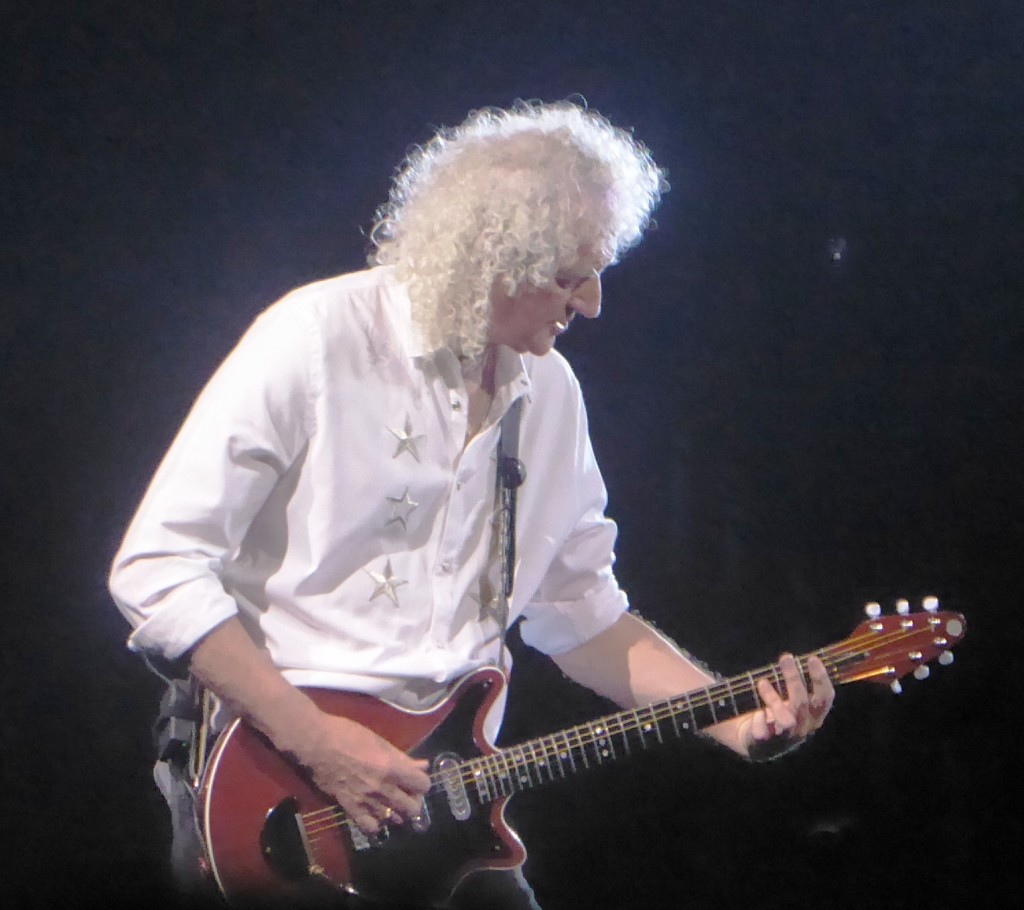 Aided by some great visuals, Adam’s swagger, and crowd singalongs  I enjoyed ‘I Want To Break Free’ and ‘A Kind of Magic’ far more than I did at the time when my teenage self considered them as Queen selling out to pop. And talking of which, ‘Radio Gaga’ finally had the majority of people to their feet, joining in with the handclaps, before the atmosphere reached fever pitch during ‘Bohemian Rhapsody’, Adam delivering the first part admirably before the band video and as a welter of explosions heralded the fast third movement, jumping and even a spot of Wayne’s World style headbanging from those on the floor.

The encore began with a 3D Freddie repeating his famous ‘day-o’ call and response leading into more clapping and chanting from everyone in the arena to ‘We Will Rock You’ and a giant CGI image of Frank, the ‘News of the World’ monster making lifelike facial expressions, before the number that more than any other sums up the over the top nature of Queen in ‘We Are The Champions’. It was quite a sight to see even those in the vertiginous upper tier swaying and all that was missing was Adam and Brian wearing royal cloaks, as the former made do with a relatively feeble crown, before they were showered in confetti as ‘God Save The Queen’ struck up. 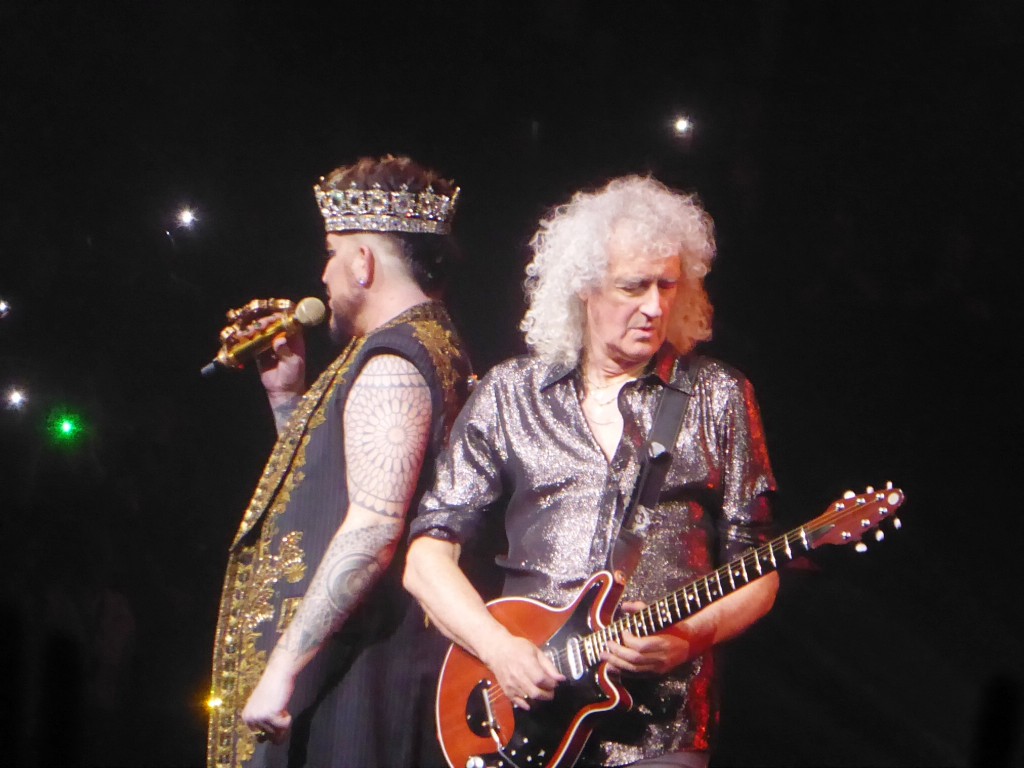 This had been a combination of straight gig and larger than life musical theatre, and credit should be shared by those whose musical contributions were literally delivered in the shadows, including second drummer Tyler Warren and musical director and unofficial Queen fifth member Spike Edney.

While the song choice was not too dissimilar from all the various post-Freddie tours, no-one surely could begrudge even the high ticket prices, as no expense was spared on a spectacle to remember. They really pulled out the stops with the stage show and effects to prove that past or present, nobody does it bigger or better than Queen. 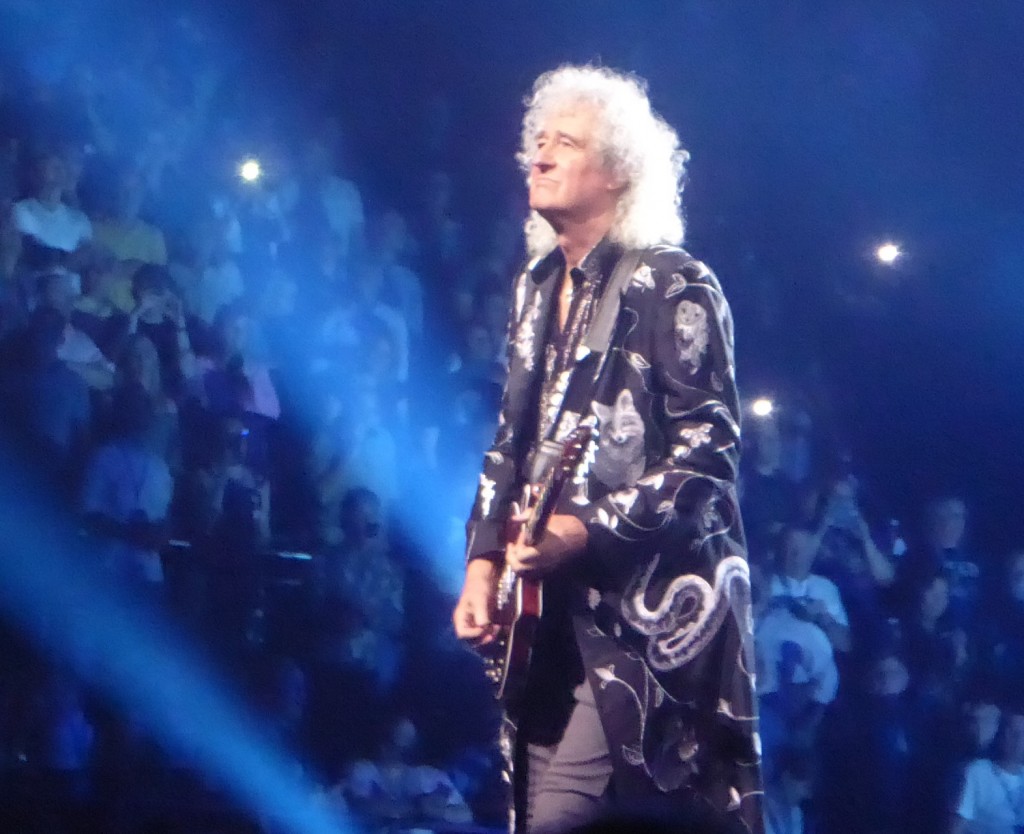