Lips Turn Blue feature Don Mancuso (a former member of Black Sheep which featured Lou Gramm who guests on this album), keyboardist Eric Bieber, bassist Mike Mullane, drummer Roy Stein and vocalist Iggy Marino, who replaces original vocalist Phil Naro who passed away last year. This album and the upcoming Talas album were both completed by Naro before his death.

Plenty of catchy, melodic hard rock is to be found on the album including ‘Just Push’ and ‘Sit Up’. ‘Better Than I Used To Be’ is a proper summer banger in the style of Night Ranger, driven along by tasty keys from Eric Bieber.

The ballad ‘Pray For Tomorrow’ is very much a song of the here and now. As Don Mancuso explains “…was written when conflicts around the world started becoming a main focus in the news; then the pandemic hit, and recently the focus has been on the war in the Ukraine”. A poignant song and another of the album’s ballads ‘No Need For You To Call’ features an impassioned vocal performance from Phil Naro.

Black Sheep’s ‘Chain On Me’ and the Beatles ‘Hey Bulldog’ are a couple of impressive covers by Lips Turn Blue. ‘Chain On Me’ features a mini Black Sheep reunion as Lou Gramm guests with his old bandmate Mancuso on backing vocals. Lou Gramm takes the lead on ‘A Little Outside’ which sees the album out in style.

A fitting tribute to Phil Naro, as well as laying down the foundation for the band to carry on with their classy brand of hard rock. ***1/2

Damien O’Kane and Ron Block return four years after their debut release (2018’s ‘Banjophony’) with ‘Banjophonics’. They treat the banjo as any other musical instrument and apply it to all manner of tunes, with the majority written by Damien O’Kane and Ron Block. They are joined by guests including Steven Byrnes (guitar), Josh Clark (drums, percussion), Duncan Lyall (double bass, Moog) and Kate Rusby (backing vocals).

Many delights to be heard including ‘Woman Of No Place’, one of two vocal tracks on the album. This one is about Margaret Barry, a traveller from Cork who played banjo & sang, and who had a big influence on musicians including Luke Kelly of the Dubliners.

Duncan Lyall’s Moog playing adds to the sound and ambience on ‘Whirlwind’, with the frantic banjo playing on ‘Happy Sevens/Monster Rabbit’ a delight to listen to. Both O’Kane and Block would be a marvellous sight to see playing these tunes live.

Banjo led music played by two of its leading exponents doesn’t get much better than this. Gone on, give it a try… **** 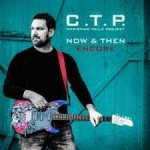 Plenty of variety on here from the Led Zep riff on ‘Ain’t Gonna Let It Slide’, the horns and catchy refrain of ‘Never Had It So Good’, and the Praying Mantis like melodic hard rock of ‘Sword & Stone’. Off his debut album ‘Better Than Dreams’ (2000), Christian reworks ‘Angel’ and ‘Monkey Park’, both sounding freshern with modern production and the vocals of David Frazee.

David Reece puts in a passionate performance on ‘Raining From My Eyes’, a song that also features the album’s guitar solo highlight.

Bit like Phil Vincent and Johnny Lima, Christain Tolle seems to fly under the musical radar of many melodic rock lovers but those who know his music will enjoy this mix of revisits and new songs. ***1/2