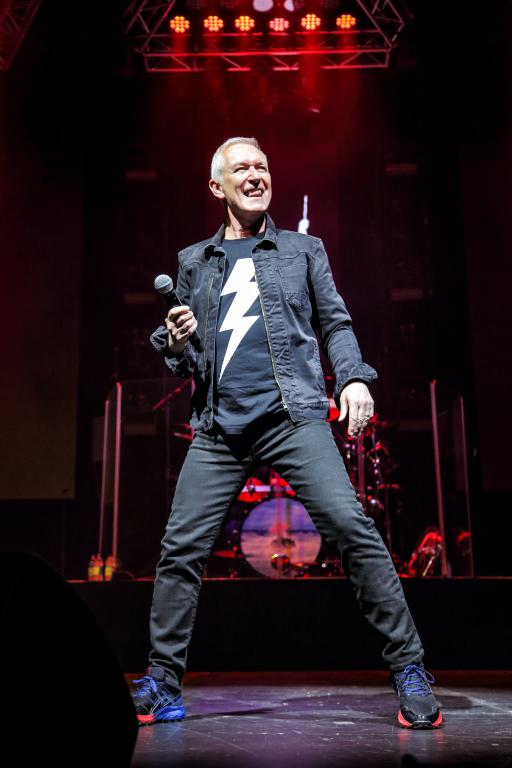 Thunder appear to be on a hot creative streak at present. In the time since this tour was originally announced, pre-pandemic, they have released two albums with last year’s ‘All the Right Noises’ followed by a double album to boot in ‘Dopamine’. However, especially with crowds being slow to return, I did query the wisdom of the choice of London venue, not least with it being an all-seater show. Indeed, with part of the hall cordoned off, it was probably at 50% capacity but an arena-sized stage show justified the choice.

The short tour was a triple bill opened by a different band each night which in the capital was the Kris Barras Band, personally some consolation for being unable to attend their recent headline show at the Electric Ballroom. It was one of their most prestigious support slots yet but bassist Kelpie McKenzie seemed rather over excited by the occasion, rushing around the stage like a hyperactive child at the start. 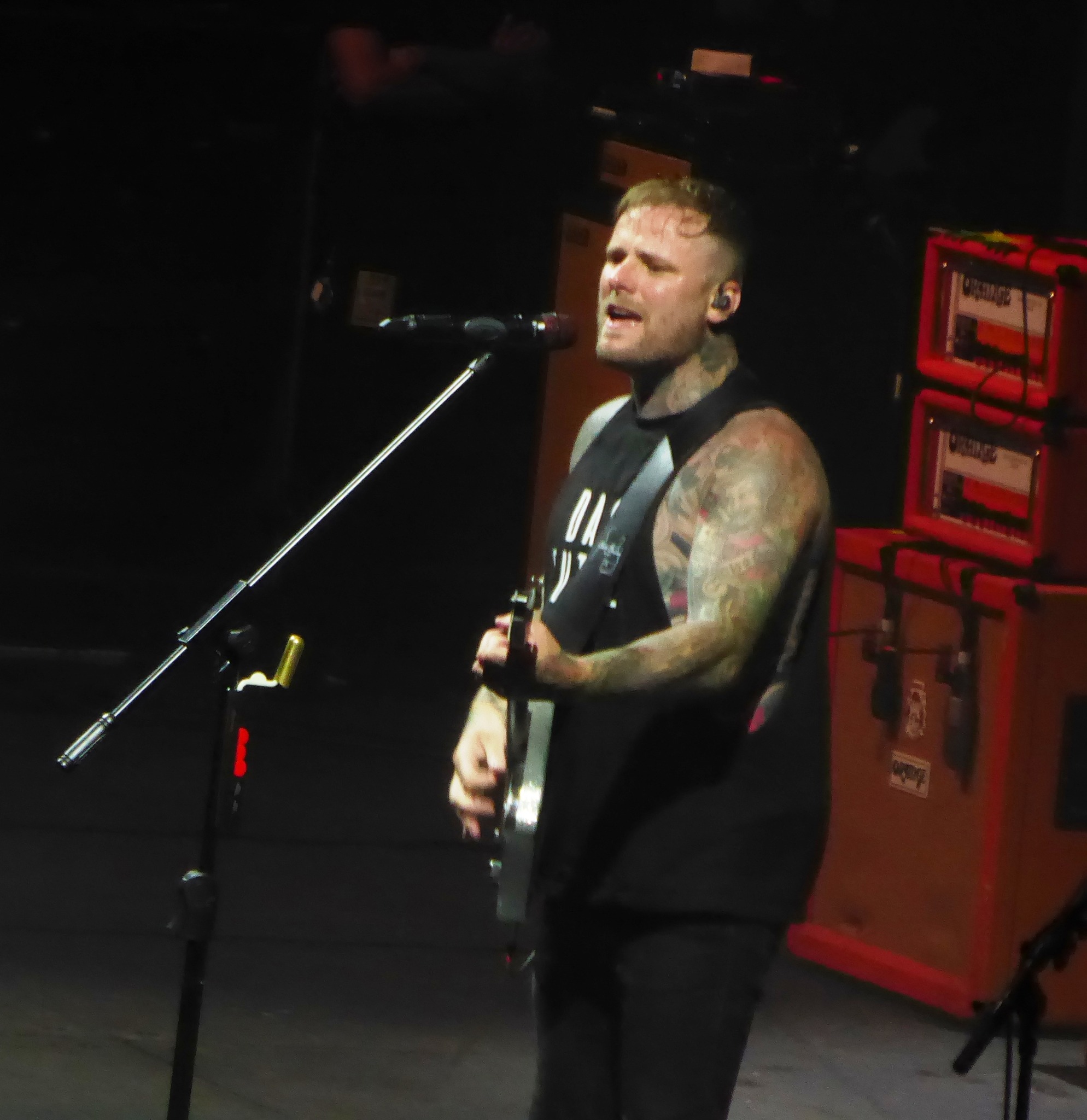 Surprisingly they opened with their traditional set piece closer ‘Hail Mary’ but still got a bit of a sing-along going, though having recently revamped the line up to dispense with keyboards, it was a bit discombobulating to seemingly hear some taped sounds.

The band have the look, moves and occasionally the sound of a metal band but for me are pure melodic rock with Kris’ voice reminding me at various stages of prime-time Jon Bon Jovi or Eric Martin. On ‘Dead Horses’ and ‘Rock n Roll Running Through My Veins’, Kris’s solos were also excellent yet not bluesy in the slightest, making the early days when he was pigeonholed under blues rock seem a long time ago. 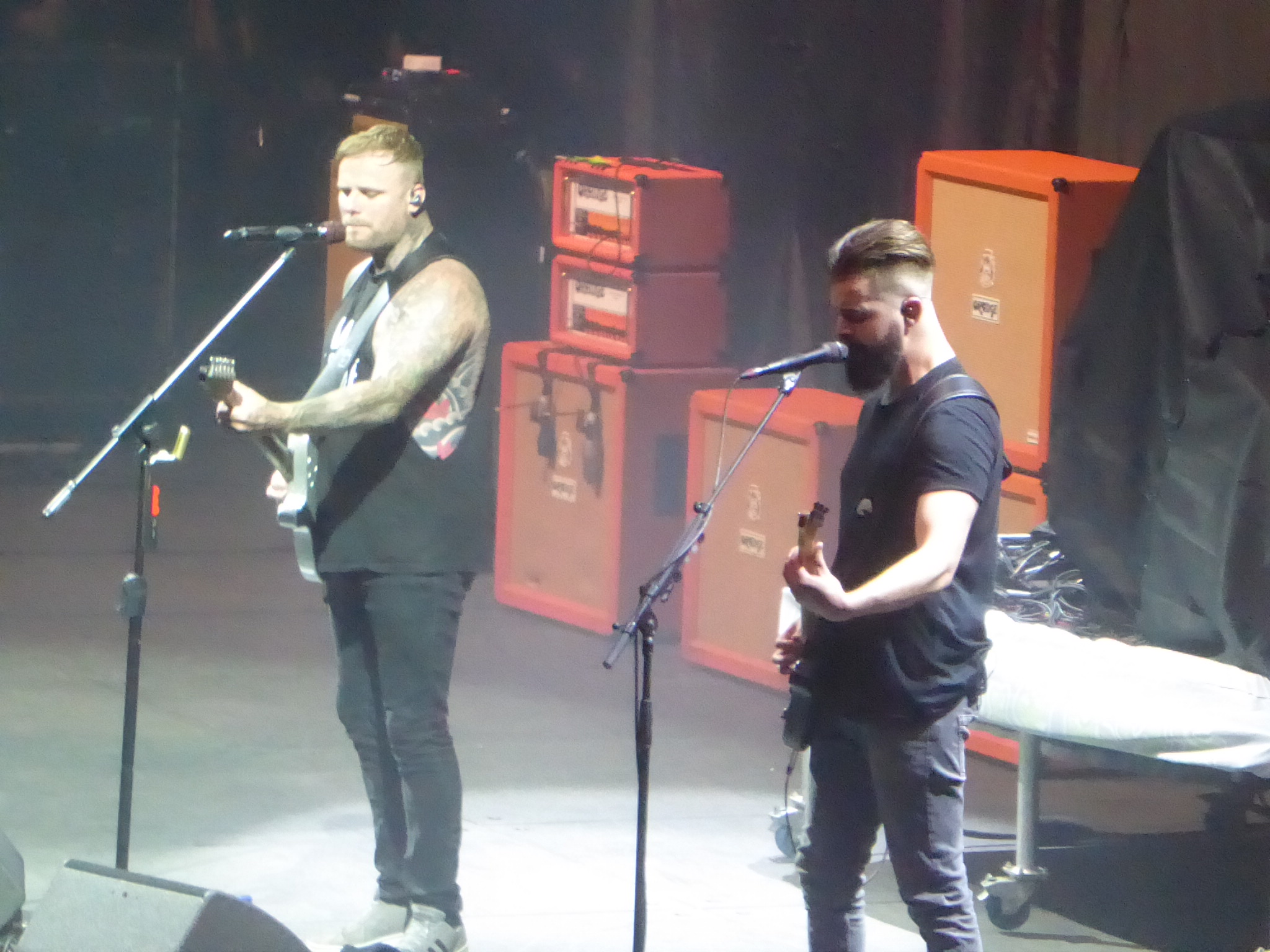 ‘These Voices’ was Interesting, mixing a modern pop feel with more brutal passages, reminiscent of Shinedown’s approach, and after the Planet Rock playlisted ‘Who Needs Enemies’ a short 30 minute set ended with ‘My Parade’, Kris again conducting the crowd in a singalong to the ‘fall into line and get out of my way’ chorus with impressive confidence.

In speaking of his pride at being asked to support, Kris had mentioned that Thunder and Ugly Kid Joe was the first show he ever attended as a nine year old in Torquay in 1995. Indeed the two have an ever longer touring history as I remember them both being on the bill when I saw Def Leppard at Don Valley Stadium in 1993. 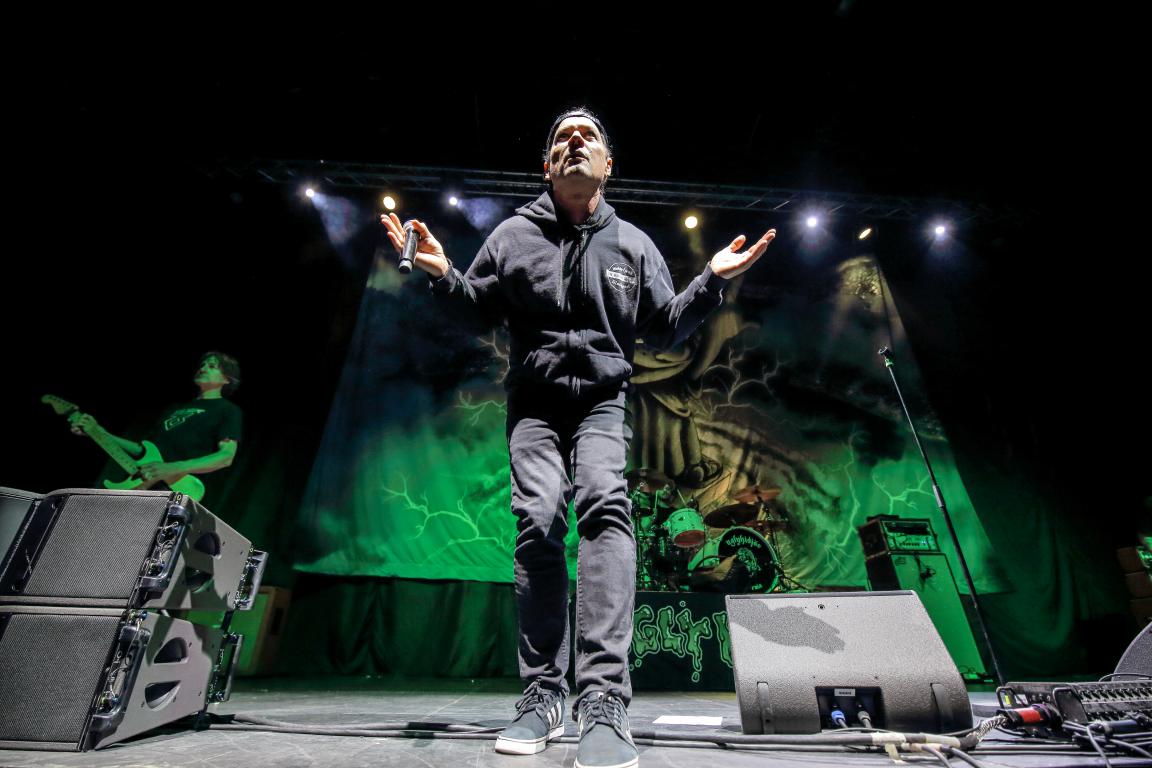 Here the Americans were the meat in another English sandwich. I can never claim to have been a big fan so was encouraged the recognisable ‘Neighbor’ (sic) began the set, while Whitfield Crane at 54 is still rocking the surfer dude look of shorts and turned round baseball cap. He was an excellent frontman, though his exhortations to crowd participation were very literal, almost as if we were playing a game of ‘Simon Says’. 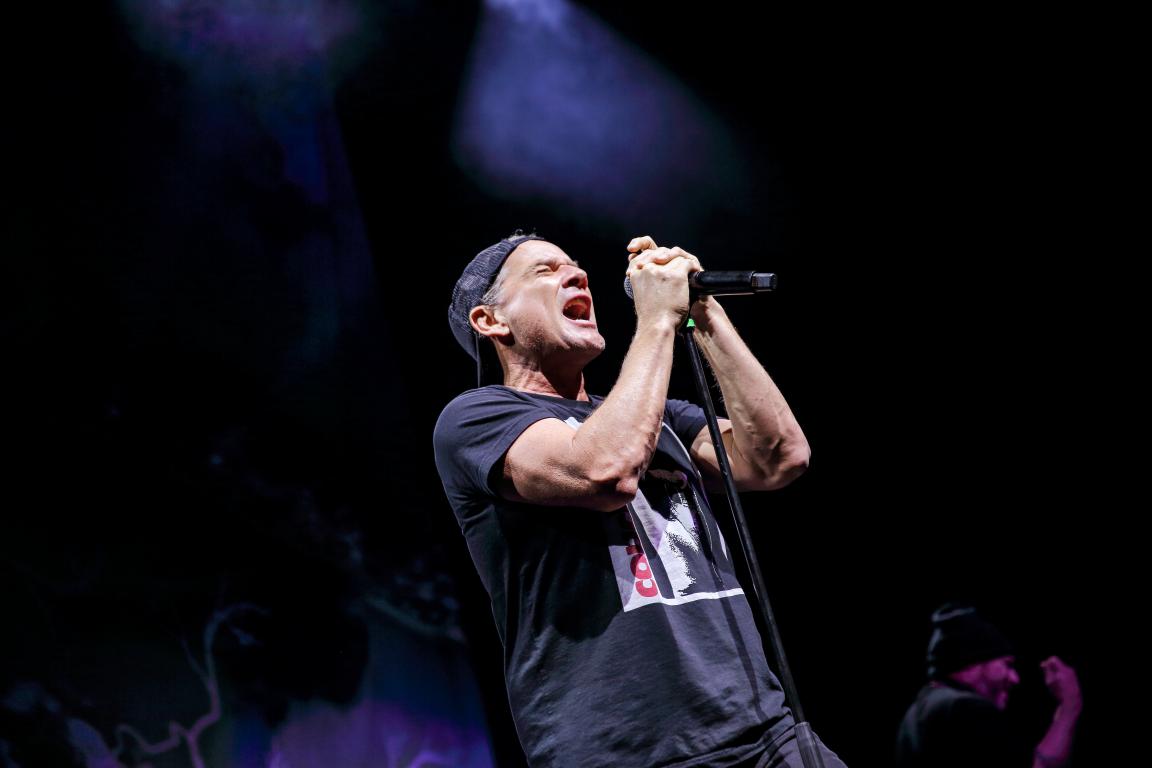 Their songs were a little nondescript though the likes of ‘Devil’s Paradise’ showed an unexpected heaviness, offset by that cover of ‘Cats In The Cradle’.

The audience had remained resolutely seated to this point and I did wonder whether their big song would rouse people off their haunches, but Whitfield pre-empted any awkwardness by asking people to do exactly that before ‘Everything About You’, one of the great snot-nosed teenage anthems to sit alongside those Alice Cooper and Twisted Sister wrote for an earlier generation.

It wasn’t to prove the last song though as they ended with a very authentic – if perhaps unnecessary – cover of ‘Ace of Spades’ and I found myself reflecting that I had enjoyed their 45 minute set a lot more than I expected to.

The tone of Thunder’s show was clear from the outset as they opened with the respective lead off cuts from the last two albums in ‘Last One Out Turn Off The Lights’ and ‘The Western Sky’, both with all the Thunder hallmarks but with a harder edge than they have shown in recent years, before the first oldie in an immaculately constructed as usual ‘Higher Ground’ with solos from Luke Morley and Ben Matthews. 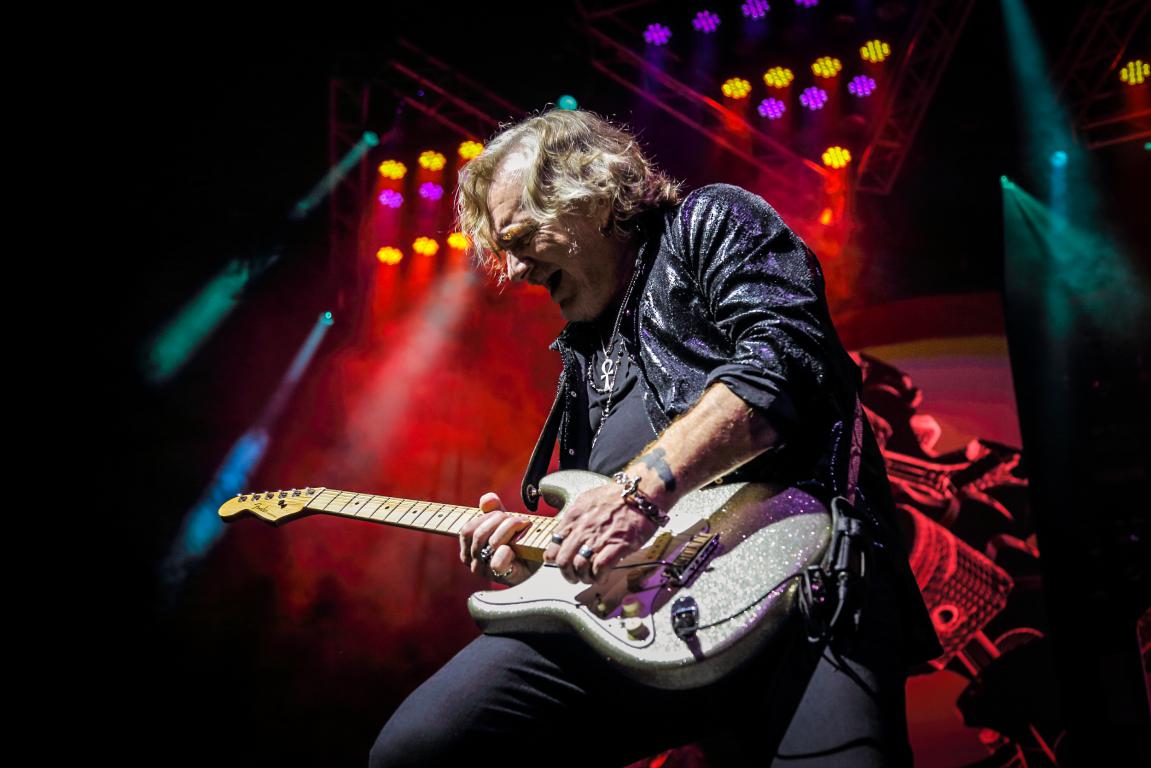 After another impressive newie in ‘One Day We’ll Be Free Again’ with a Who-influenced arrangement and a good chorus, singer Danny Bowes introduced the latter guitarist as the ‘comeback kid’, having beaten cancer twice.  His statement that ‘the song wasn’t written about him but it should have been’ disabused my assumption, but ‘Resurrection Day’ remains one of their finest songs and Danny orchestrated a series of ‘who-oah-oah’s at the song’s climax. The sound was good and it struck me that we unfairly have taken for granted the reliable and unfussy excellence of the band, and in particular Luke and drummer Harry James. 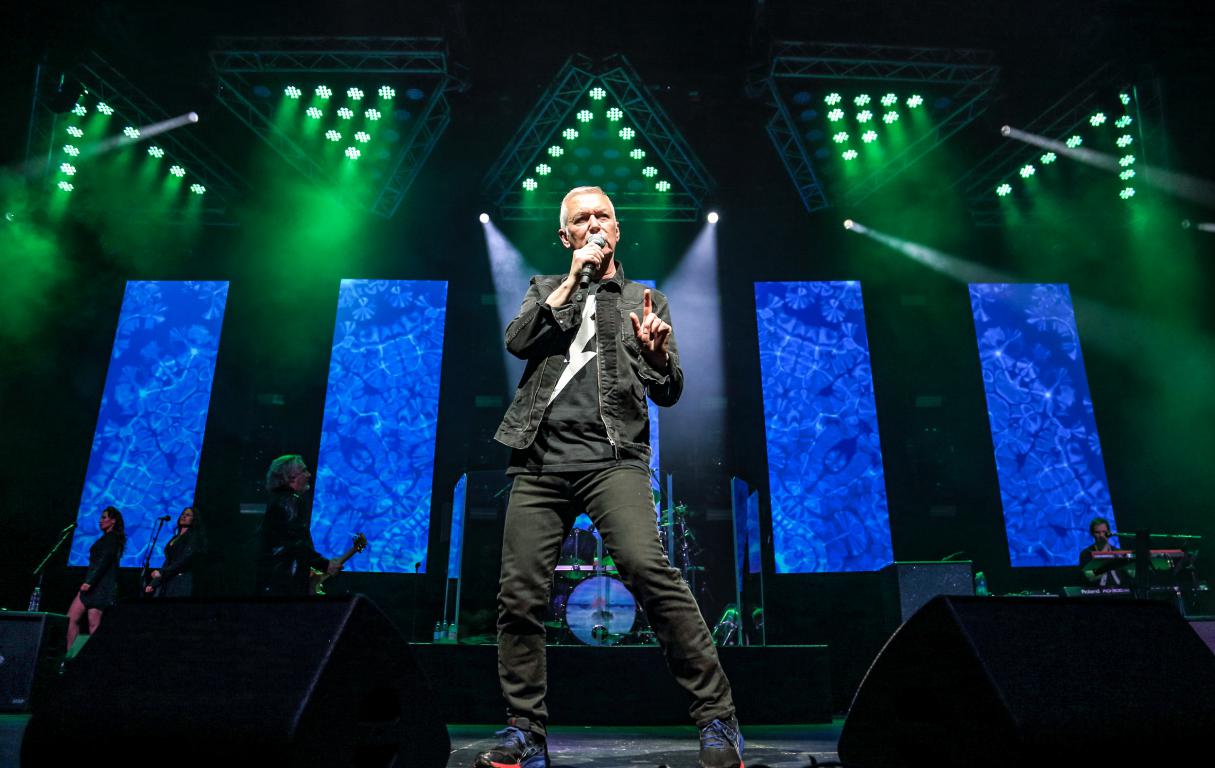 Reviews of the last two albums have commented on their diversity and sure enough, either side of another old crowd pleaser in ‘The Devil Made Me Do It’, ‘Unravelling’ was driven by Luke’s acoustic and had a relatively gentle and sparse arrangement  but ‘Destruction’ was heavier and darker. It was also one of a number of songs to be given an added dimension by a pair of female backing singers.

It was a bold move for some 60% of the set to be making its live debut, with old staples like ‘River Of Pain’ and ‘I Love You More Than Rock’n’Roll’ dropped for the first time in many years. For a band of Thunder’s longevity it comes with huge risks when many in an older audience want to be taken on a trip down memory lane. 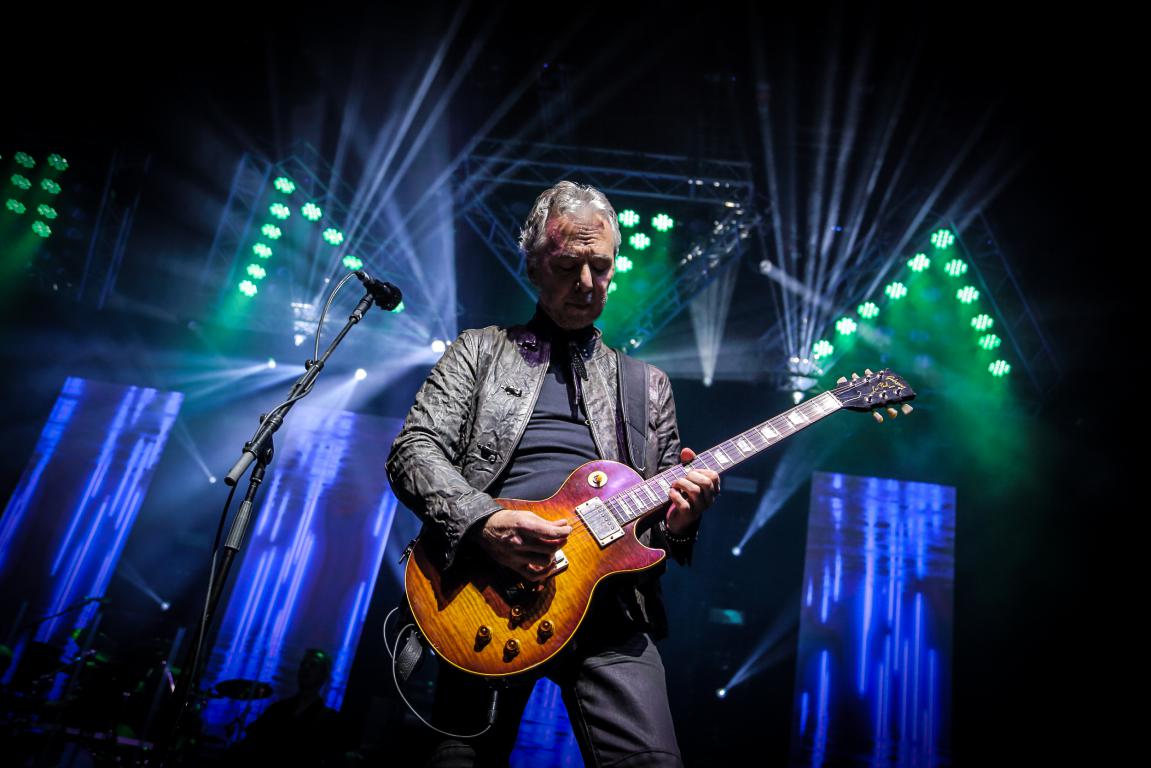 Personally I welcomed their desire to focus on the here and now: not only was it a first chance to properly familiarise myself with some new songs, but there have been plenty of opportunities to hear old hits at festivals or obscurities at their Christmas shows and doubtless will be so again.

However, on what he called the ‘oldie but goodie’ ‘Low Life In High Places’, I was thinking special mention must be made of Danny Bowes, at a time when the declining vocal prowess of many of the stars we grew up on – Coverdale, Bon Jovi etc- is a talking point.

Danny always had one of Britain’s classic blues rock voices but watching him was a masterclass- his tone and diction and ability to hit all the original notes exemplary. While still quick witted, the frontman did noticeably cut back on the dad dancing and ‘sing-along a-Danny’ of old, but that was a small price to pay for retaining peak vocal performance. 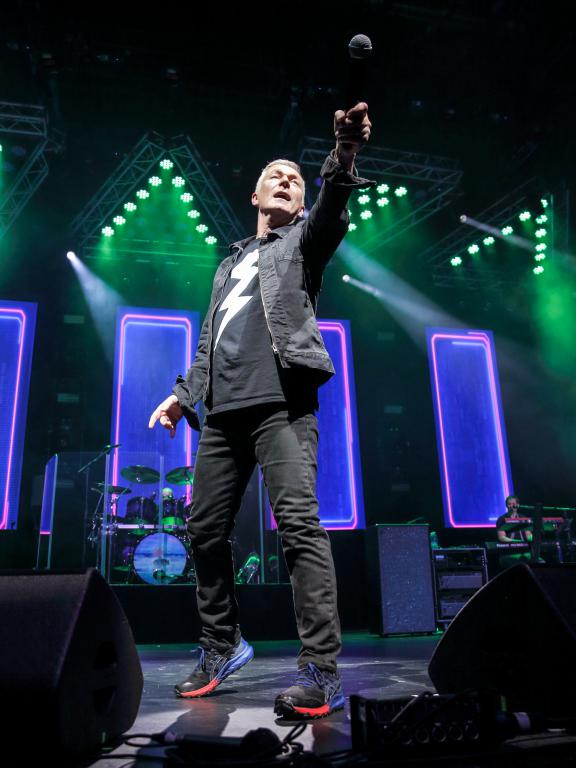 Old and new continued to sit side by side. ‘Young Man’ also impressed with its lyrical message of simpler times in the band’s youth compared to now, that would have resonated with many in attendance, while ‘Black’ was another experimental number, almost baroque or gothic in feel on a couple of occasions and reminding me of Luke’s days with The Union.

‘Love Walked In’ began relatively slowly but, helped by the expanded line up, it became massively powerful, before another new song ‘Across The Nation’, more straight ahead and up tempo, with prominent barroom-style piano from Sam Tanner, another addition as a full-time keyboard player with Ben concentrating solely on guitar.

The main set ended with the memorable riffs of ‘Backstreet Symphony’ bringing the atmosphere belatedly to the boil. Yet even the encores began with two further new songs- with Luke on acoustic guitar and the opening vocals, ‘Last Orders’ did not wholly convince but the bouncy ‘Dancing In The Sunshine’ had the right stuff to be a regular addition to the live set, before Danny’s big build up led into the party that is ‘Dirty Love’, albeit this time a relatively restrained eight minutes in length. 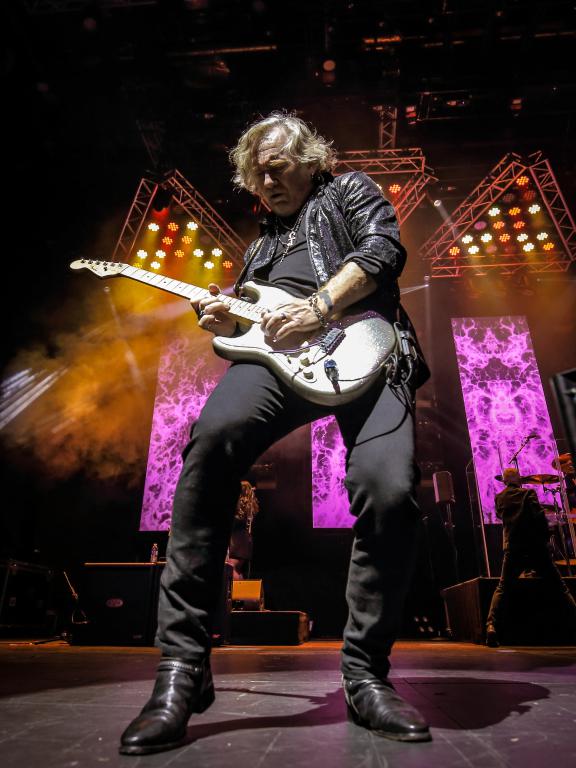 Such ‘Backstreet Symphony’ material is now over 30 years old and the conventional wisdom is that Thunder have never bettered it. But, given the strength of the new songs and the all-round quality of their performance, the evidence of this gig is that Thunder are now in a golden period in what for other bands might be the autumn of their career.