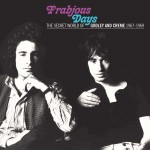 Kevin Godley and Lol Creme didn’t know what they were doing. Well, that’s not strictly true. To be accurate : There’s a thrill in not knowing what you’re doing but aiming high anyway and that, I believe, is exactly what’s going on in these recordings. (Kevin Godley).

Godley and Creme would go on to form 10cc with Eric Stewart and Graham Gouldman. But for now they were known as Frabjous and Runcible Spoon, enjoying their baptism in the murky waters of the musicbiz.

It was 1968, they’d been “discovered” by larger than life Impressario/Manager/Producer, Giorgio Gomelsky, the man who played a key role in the careers of the Rolling Stones and The Yardbirds. And it was Gomelsky who signed them, named them and recorded this Frabjous Days’ material.

For lovers of artist specific rock and pop arcana, this collection is a veritable goldmine, featuring many previously unreleased tracks, including two Gouldman songs that never got further than acetate, and the guts of the duo’s debut (but never released) album (to have been on Gomelsky’s Marmalade label).

And for lovers of the duo’s higher profile career as members of prolific hitmakers, 10cc, it will be a revelation.

For all the “not knowing what they’re doing” talk, it’s clear that the duo are natural performers, in their case inspired, as many artists are inspired, by personal experience.

Echoes of the Beatles, Ray Davies and the lesser known Gallagher and Lyle ring through this collection, and just like those artists wrote and sang about the people and places around them, so did Godley and Creme. ‘Best Seaside In The World’ and ‘I’m Beside Myself’ are just two.

And you can hear the slick, oven ready wordplay and the melodic artistry that they would eventually bring to the 10cc table in ‘Cowboys And Indians’ and ‘Take Me Back’, two more of the standout songs from the unreleased material.

There’s more of course. Including three Gouldman penned songs, planned for the debut, most notably ‘Hot Sun’, a song with Yardbirds’ ambitions. And a couple of previously released, vinyl only tracks, pressed in 1968 to promote Blinkers, a famous Manchester nightclub. If that isn’t genuine arcana, we don’t know what is.

The duo went on to have a massive hit single, ‘Neanderthal Man’ in 1970 with Eric Stewart, as Hotlegs. They then became 10cc when Graham Gouldman ultimately joined the trio.

Frabjous Days is a 19 track, digipack release. Bundled with a 28 page booklet that includes rare photos and memorabilia, plus a 6000 word essay.
A little piece of rock’n'roll history. ****