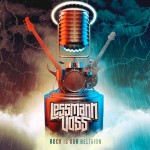 This Lessmann Voss, Rock Is Our Religion album would be easy to write off because it seems so out of time.

Bonfire’s Claus Lessmann and Mad Max’s Michael Voss are clearly not keen to wear the musical garb of leathery road warriors any longer. RIOR is mostly an album of laid back, best-before-1989 melodic Rock.

In fact most of the songs sound like they’ve been beamed down from some extra terrestrial FM Radio station, orbiting the planet, stuck in the eighties.

There’s a whiff of heartwarming nostalgia to them all, while at the same time there’s a freshness here that animates the music.

There’s no doubt that the passage of time has done nothing to diminish the duo’s ability to write and produce great melodic rock songs. ‘Smoke Without Fire’ is a peach, ‘Fight For Our Love’ has a gloriously hard edged pop flavour. Voss’s finely tuned production gives both a burnished veneer of sophistication that underlines the music’s authentic feel.

‘Medicine Man’, ‘Sister Golden Hair’ and ‘Runaway Days’ are built around an immediately engaging batch of melodies, each burning slowly but brightly, making some astute lyrical observations en route, including a reluctant acceptance by both artists that they are getting older and greyer now, as the years speed by.

Even though it treads that familiar ground of love found and love lost, ‘Take My Heart And Run’ is a genuine highlight. A bittersweet love song that quietly unfolds like a summery melodic rock flag.

In a similar vein, ‘Slow Dance’, an old fashioned, late nite ballad, doesn’t quite hit the mark, but it makes the effort worth lingering over.

Rock Is Our Religion, the album, is never going to shake the world, (though it tries toward the end with ‘Stay’ and ‘What Feels Right’) but above all it’s written and performed by two distinguished musicians who know what works, and what doesn’t, and it’s all the former here. ***1/2