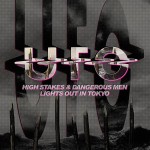 UFO’s Lights Out (1977) had been a huge album for the band in Japan. So when they toured the High Stakes And Dangerous Men album there in 1992, they would include a Lights Out set. Thus this pairing of studio and live.

The High Stakes… studio album was the one and only UFO album to feature guitarist Lawrence (Grand Slam/WildHorses) Archer and drummer Clive (Uli Jon Roth/Bernie Marsden) Edwards, and it’s a beautiful thing. An in form Phil Mogg and the return of influential wildman bassist, Pete Way completed the line up. No lab could have cooked up this chemistry. They are clearly so in tune with each other that we cannot avoid being in tune with the music ourselves.

The songs, as usual, are something of a force of nature, bruising encounters with life, full of sharp metaphors and guilty parties.

From ‘Ain’t Life Sweet’s visceral riff and back-to-front catharsis to ‘Bordeline’s propulsive rhythms and hard won promises, the album’s tough as teak hard rock treats love and relationships like contraband, to be smuggled past the powers that be.

Mogg’s voice has a worn down edge that suggests he’s circled the block many times and danced with the devil more than once. It has that strident authority that carries songs like ‘Primed For Time’ and ‘Running Up The Highway’ which, in other hands would have come across cliched and hopelessly dated.

High points of the Lights Out Live In Tokyo disc are unquestionably the closing handful of classic tracks. Few bands can equal the rapidfire ‘Doctor Doctor’ and the sheer raw urgency of ‘Rock Bottom’. Both tracks propel the band full tilt into ‘Shoot Shoot’ and a blazing cover of Eddie Cochran’s ‘C’Mon Everybody’.
As the cliché goes, the audience went wild.

The remarkable quality of the remastered sound is worth mentioning here. Thirty year old recordings shouldn’t sound this good, but they do. ****