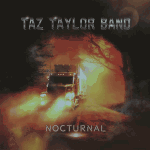 Taz Taylor’s classic hard rock never stands still – it’s always in motion, on the move, heading somewhere. Maybe that’s a holdover from his time driving 18 wheelers across the USA for a living, before he got his first break in the music business.

The numbers first… Sixteen years later he’s on his seventh album. Five vocalists across Nocturnal’s twelve tracks. This in itself doesn’t always lead to great rock’n'roll listening, especially when the album is sprinkled with instrumentals, but you certainly feel like you get you money’s worth.

The most interesting of the the instrumentals is probably the softly emotional ‘George’s Song’, a tune nicely pitched in that emotional space between ‘Cavatina’s guitar acoustics and Slash’s anticipatory intro to G’N'R’s ‘Anastasia’.

David Reece and Mark Boals are matched with two of the set’s oustanding songs. ‘Ready Or Not’ and ‘Be Mine’ have a dark, derivative Britrock swagger, grounded in solid, bass heavy rhythms. Both spin on Taylor’s razorwire guitar figures, underpinning a couple of seriously sinuous melodies and high calibre vocal contributions.

That said, by throttling back on the voice projection, Doogie White’s mannered honesty on the stripped down ‘Raw Nerve’ is a winning touch. It gives the song a whiff of dark theatrics – edgy pop rather than rock – with echoes of the Beatles’ White Album running through its grooves.

Graham Bonnet and Chandler Mogul, both of whom have solid recording pasts with Taylor, aren’t too far behind with the entertaining ‘Accidental Tourist’ and ‘Blue’.

But to be perfectly honest, all of the tracks here suggest the album was recorded on a taut, high pressure schedule, making the whole experience streamlined, economical and friction free. A bit like piloting eighteen wheelers across the USA. ***1/2