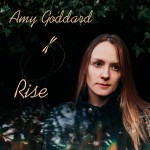 Amy Goddard is a British contemporary folk singer/songwriter with both Celtic and American influences. She is also an artist and luthier (which I had to look up and they are a maker of string instruments). With guest musicians including three-time nominated BBC Radio 2 Folk Awards Musician of the Year Ross Ainslie and Hannah Fisher.

It is a moving and thought provoking listen as the opening song ‘Make Your Mark’ demonstrates, concerning prisoners of conscience. The electric guitar of Jon Lewis adds further clout to the song. ‘Cornish Mist’ and ‘This Old House’ are the real album stand outs, as both give ample room in the mix for Amy Goddard’s soothing and emotional vocals.

Those who enjoy a traditional piece of folklore ‘The Beast of the Cut’ will more than satisfy, whilst her up-tempo version of John Stewart’s ‘Odin’ continues the mythical theme. The other John Stewart penned song on here, ‘Hunters of the Sun’, has a nifty rock n roll sound to it. The guitar on this one tips a hat to Richard Thompson’s style of playing.

‘Rise Anew’ is Amy’s take on lockdown, which although it seemed to go on forever at the time now seems like a long time ago. Sees the album out on a positive note.

2022 has seen a fine number of singer songwriter releases in the folk arena with Amy Goddard’s ‘Rise’ up there as one of the best so far. ****