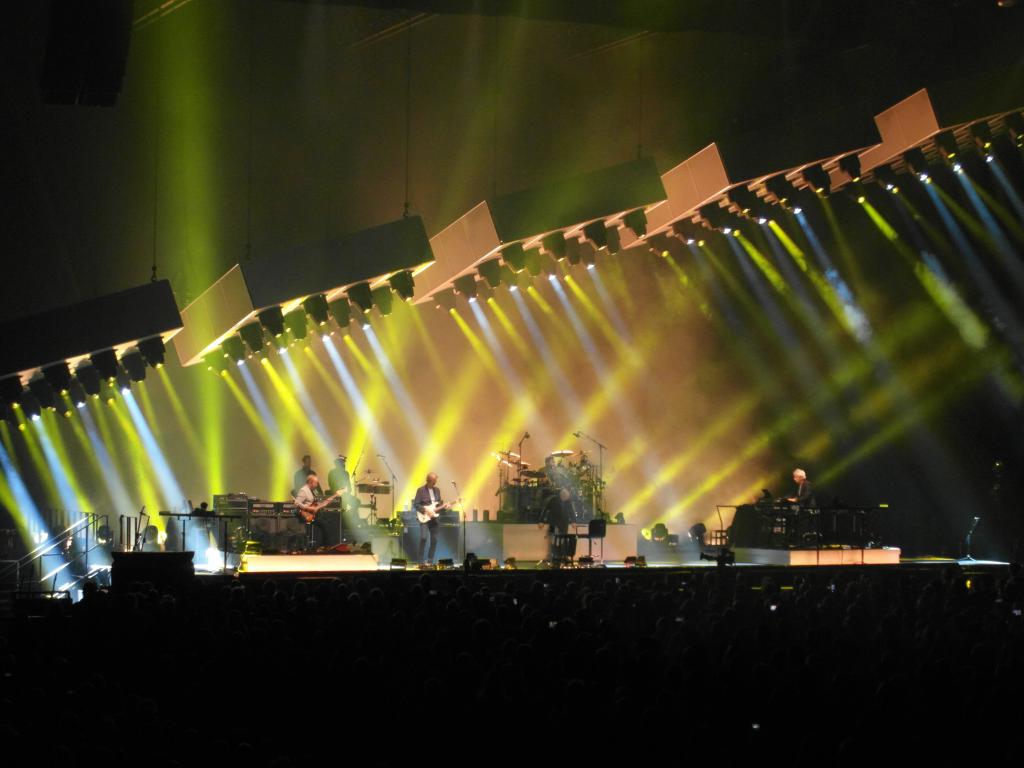 39 years ago, as a fresh faced teen, I accompanied my brother to my first gig which was Genesis at the Ingliston  Royal Highland Exhibition Centre in Edinburgh. That night sparked my love of live music, so I have a lot to thank Genesis for and over the intervening years I have seen the band many times. So, tonight’s show was a pure nostalgia trip for me and  to be honest it, wasn’t one I expected to happen. Having hung up the mics at the Hollywood Bowl back in 2007 there was no Genesis, so the decision to hit the road one more time came as a surprise.

The big question mark though was on the health of Phil Collins. It’s well known that he has had health issues for a number of years, causing him to retire from the drum stool, and latterly, to sing from a seat on stage as was the case on his last solo tour. His commitment then to go back on the road was a surprise and a bit of an unknown as to how he would cope and how his voice would hold up. 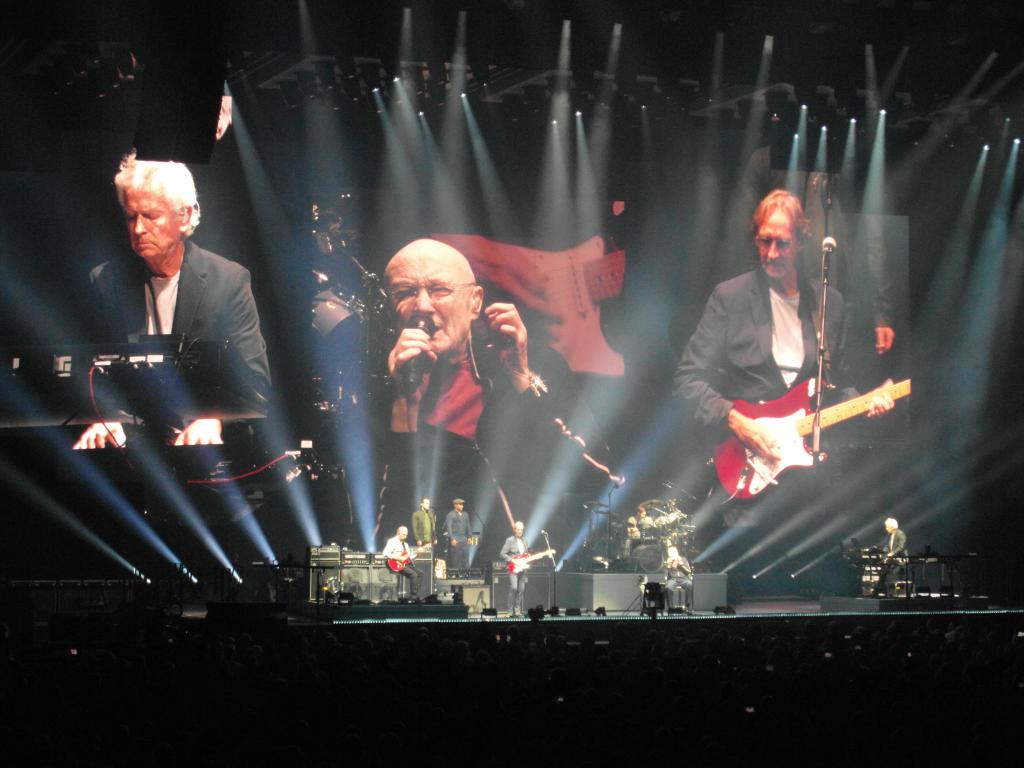 Prior to tonight I had read reviews of previous shows that suggested that Phil was doing well and his voice was strong, so I hoped for the best and looking at the set list there was a good variety of old and new numbers in there to keep even the most ardent fan happy.

As the lights dimmed the band took to the stage. It was a new look Genesis on this tour with Phil, Mike Rutherford and Tony Banks being joined by long time live guitarist Daryl Stuermer, Daniel Pierce and Patrick Smyth on backing vocals and Phil’s son, Nic Collins, on drums. 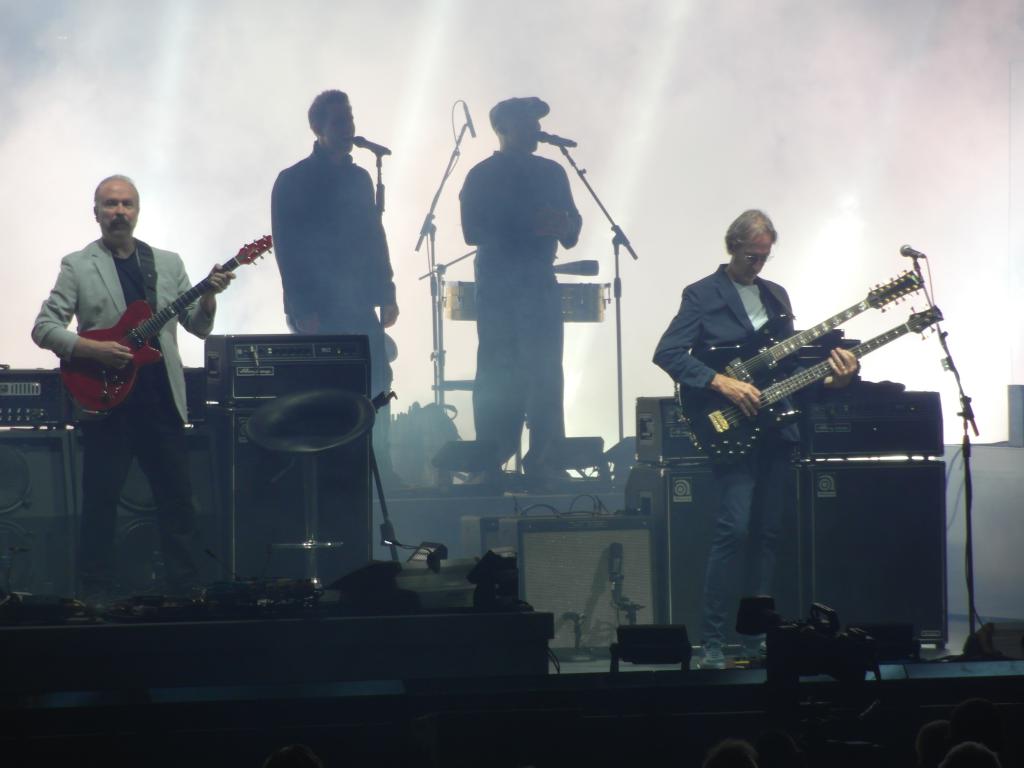 The band opened with an instrumental pairing of ‘Behind The Lines’ and ‘Duke’s End’ that took me back to that first gig in 1982. That then led into ‘Turn It On Again’ and the first vocal of the night from Phil, which wasn’t great to be honest.

He was clearly struggling, and his vocal was strained which was not a great start. Over the course of the following few songs, he did warm up and things did get a bit better, but he was a shadow of his former self, although he tried his best. He also stumbled over lyrics on a few occasions and got lost mid-song, so it was a blessing that they had the foresight to draft in Daniel and Patrick on backing vocals to cover the gaps. 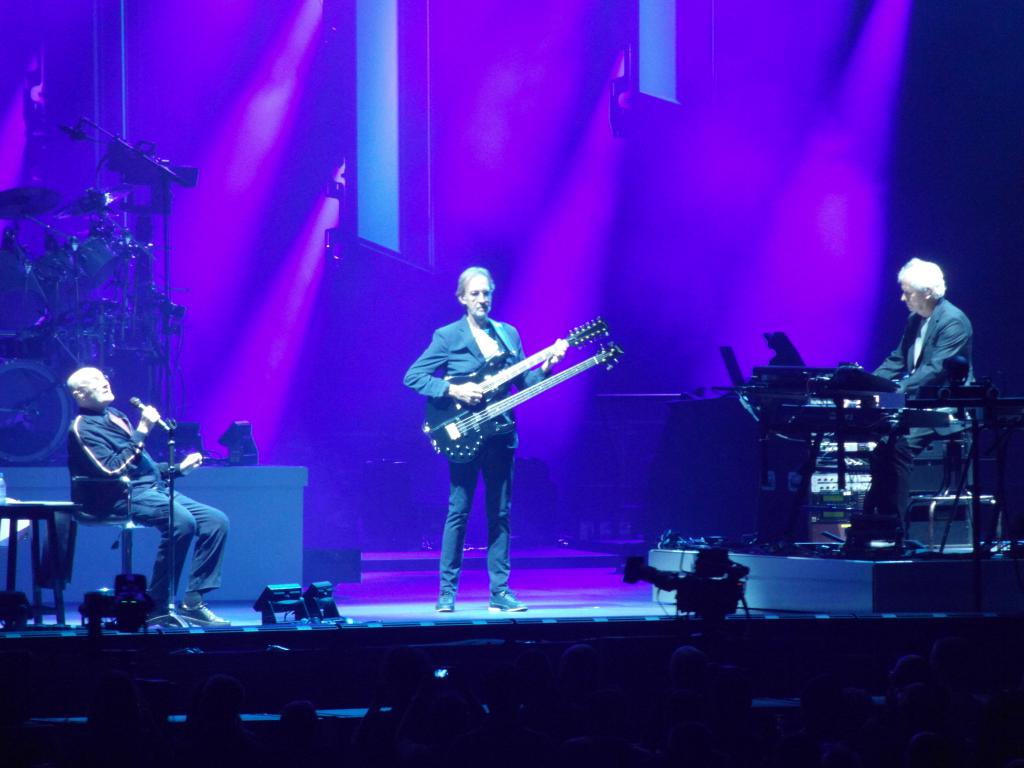 However, we were here to celebrate the Genesis legacy and, as always, the music was spot on and the light show was something to behold. The stage was bathed in red light for a menacing version of ‘Mama’ complete with Phil’s manic growl to add atmosphere.

Regardless of his vocal performance, Phil is still the joker in the pack and his between song banter was as sharp as ever including a few quick responses to heckles from the Glasgow crowd.  Commenting on it having been a strange couple of years, Phil led the band into ‘Land Of Confusion’ which was backed by scenes of deserted streets in London during lockdown flashed up on the video screens across the back of the stage. 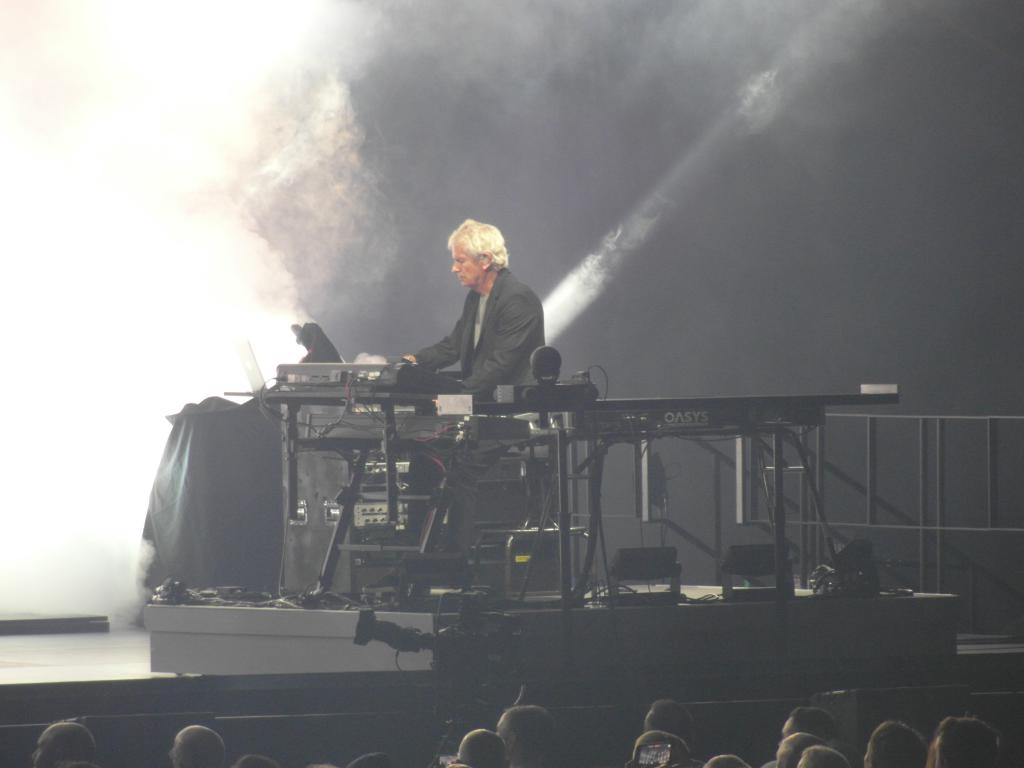 The crowd were then enlisted to summon the demons haunting the ‘Home By The Sea’ which was again accompanied with a great visual feast from the back screens and the domino themed lighting rig. One of my set highlights was up next with a medley starting with a couple of verses of the excellent ‘Fading Light’. That then segued into ‘Cinema Show’ and ended with the majestic ‘Afterglow’, a song that gets me every time!

The stage was then quickly rearranged for a short acoustic set with Phil joking that after 50 years Tony Banks and Mike Rutherford were on the wrong sides of the stage. The country tinged ‘That’s All’ kicked things off and was well suited to the intimate acoustic treatment. A heavily re-worked version of ‘ The Lamb Lies Down On Broadway’ followed with the Glasgow choir in good voice on the chorus. ‘Follow You, Follow Me’ rounded of this section and it was good to hear it live once more. 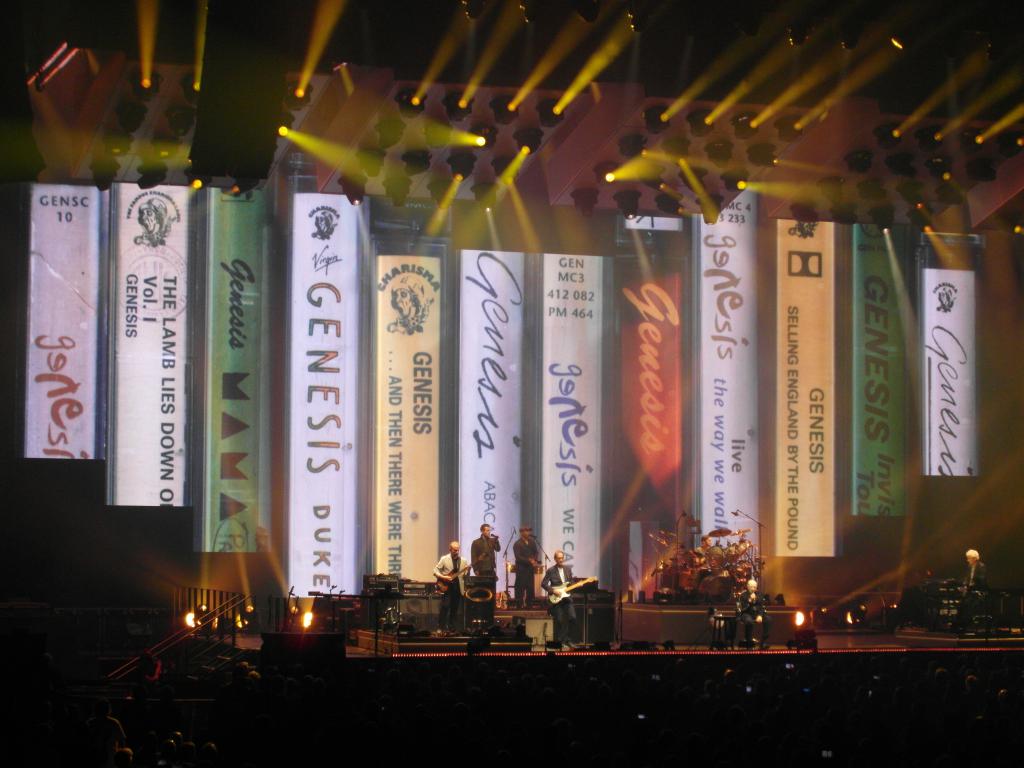 There was one song I spotted on the set list that elicited an involuntary expletive to be uttered and that was ‘Duchess’ from the Duke album. One of my favourite songs, it hadn’t been played live since 1981 and tonight it didn’t disappoint. Phil carried this one well and it proved to be the highlight of my night. ‘No Son Of Mine’ was up next and was as powerful as ever before Daryl Steurmer took centre stage for the instrumental section of ‘Firth Of Fifth’. 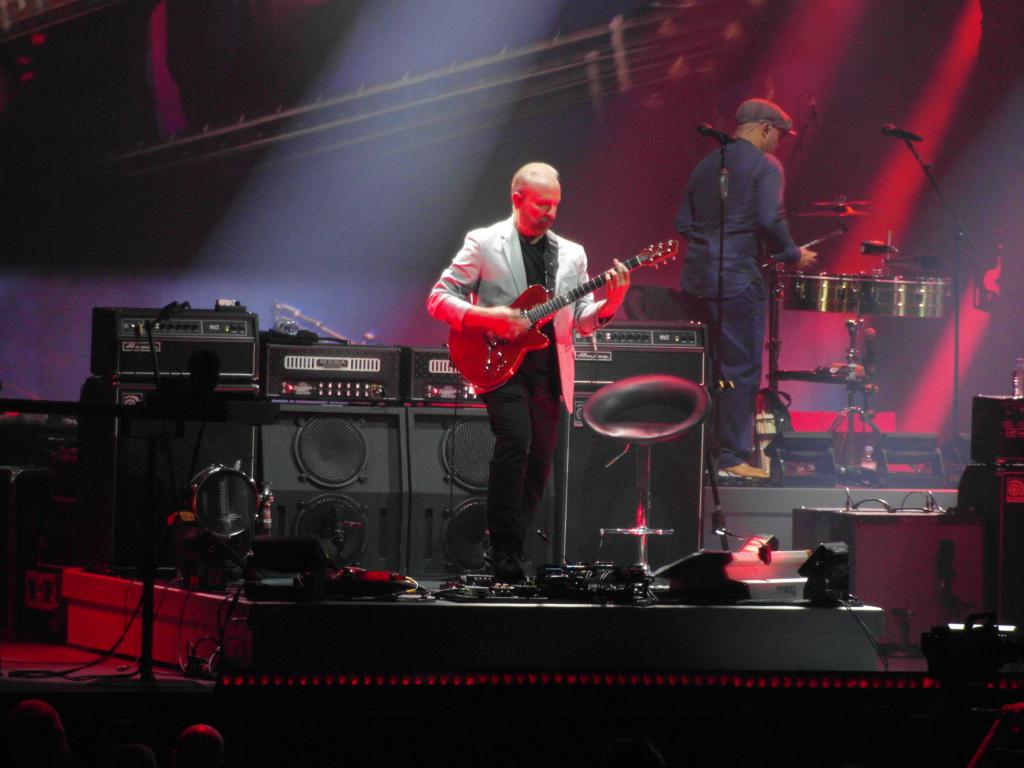 It’s always interesting at a Genesis gig to watch the crowd during these older numbers. You can spot the long-time fans who get lost in the music whilst the ‘I Can’t Dance’ era fans are left looking bemused, it’s almost like you are dealing with two different bands. Even the newer fans recognised ‘I Know What I Like’ though and again they sang along in the chorus. Phil also played up to the crowd mid-song by trying to recreate his tarantella antics of old whilst seated and paying up to the cheering crowd.

The video screens then moved into overdrive for ‘Domino’ which had yet another stunning light show to accompany the music. This was one of the big numbers of the night and the staging was spot on. ‘Throwing It All Away, and ‘Tonight, Tonight, Tonight’ dropped the pace before ‘Invisible Touch’ brought the main set to a celebratory end. 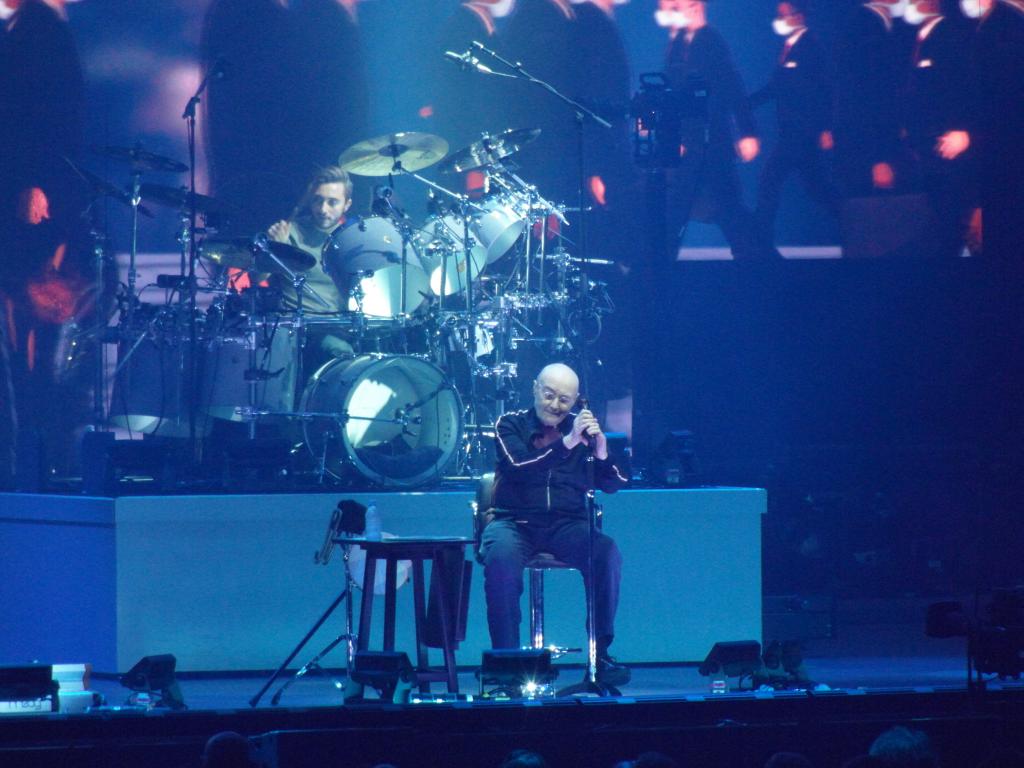 The band then reappeared with the video screens showing the familiar walking figures from the ‘I Can’t Dance’ period. The song went down well complete with Phil hamming it up during the ‘perfect body with a perfect face’ mid-section. Phil then sang the first verse of ‘Dancing With The Moonlight Knight’ which, given his issues elsewhere, was clear and strong. That just left ‘The Carpet Crawlers’ to round off the night in fine fashion. Mike Rutherford and Tony Banks took the lead here and it was a great song to end the set. 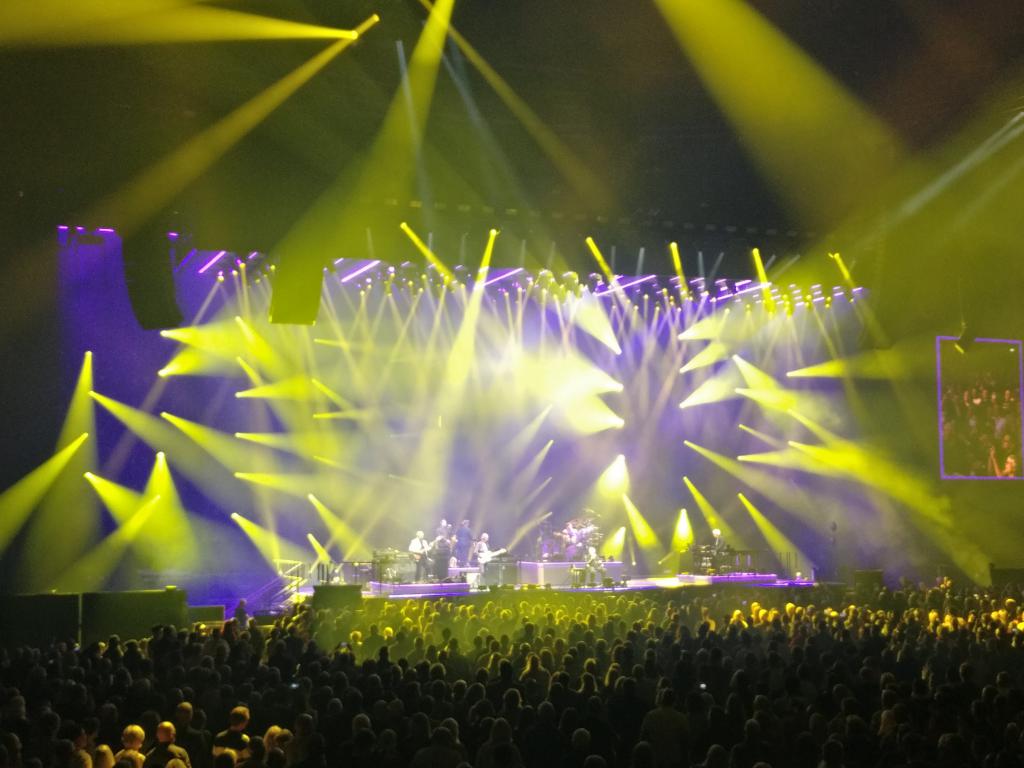 A good gig then with a strong set list, great staging and top-notch musicianship. I was left though wondering whether this tour should have gone ahead. With covid delays, what seemed like a great idea two years ago may not have been so good given Phil’s deteriorating health issues. He struggled throughout and, as my brother said later, he was surprised there were not more early exits in the crowd. 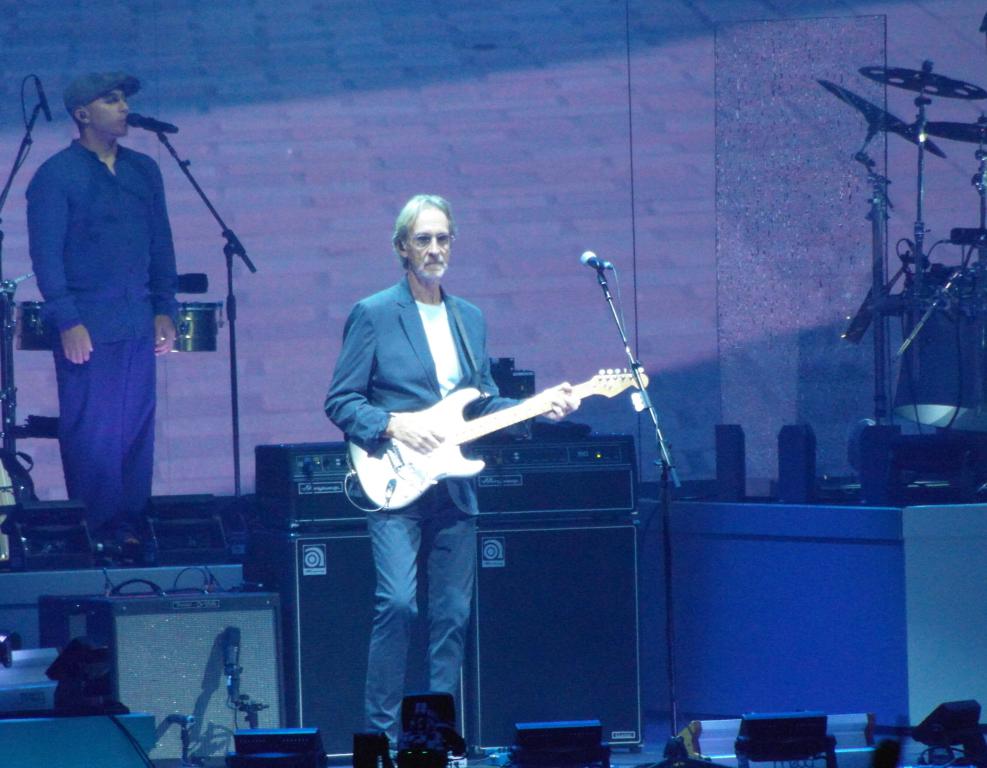 For older fans like my brother and I this was more about nostalgia than anything else and having seen the band in their heyday we know how good the band can be and could perhaps see past the failing tonight. However, for someone taking the opportunity to see the band live for the first time I am not sure they would have been too impressed, which is a shame.

The Last Domino? Most definitely. Thanks for the memories guys…

Footnote – The following day it was announced that the rest of the tour had been postponed due to band members testing positive for Covid. We wish all involved a speedy recovery.