Posted on November 3, 2021 by andynathan 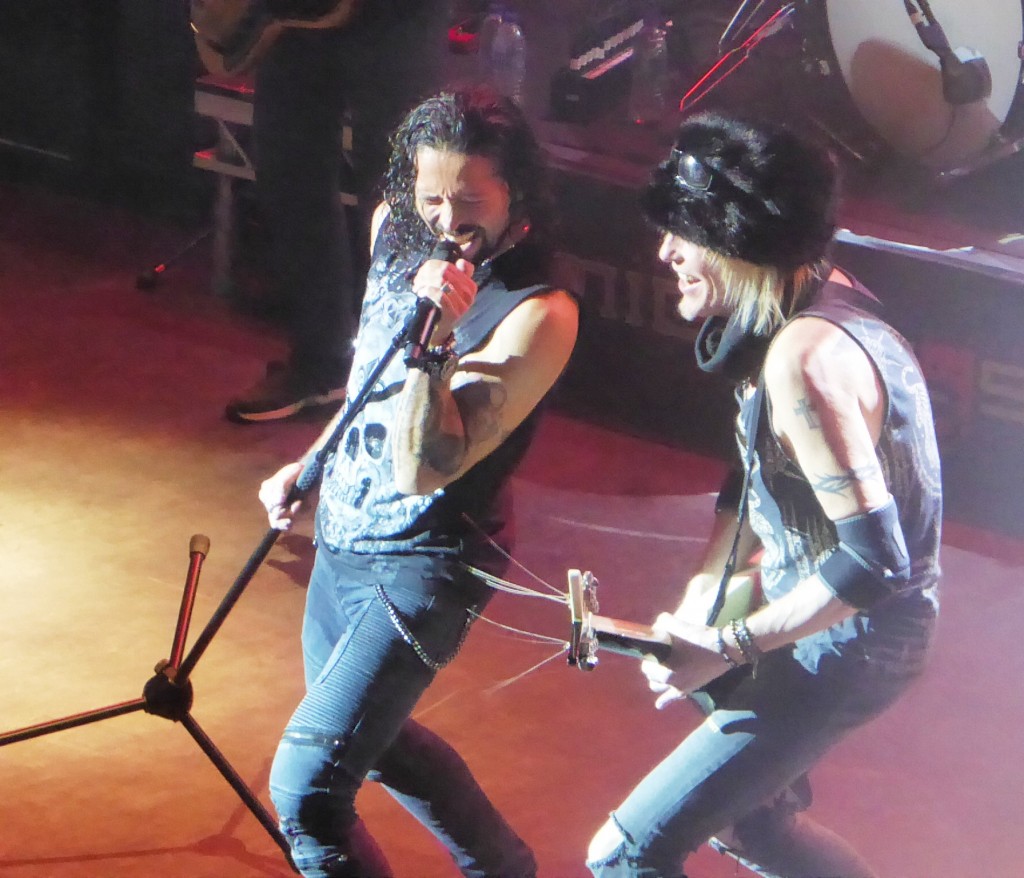 For many years it seems I was fated never to experience one of my teenage guitar heroes Michael Schenker, at his finest. My only experiences of him in the last millennium were the McAuley Schenker Group’s short support slot to Whitesnake, witnessed from the back of Wembley Arena, then a brief appearance reunited with the reformed UFO where he bizarrely dyed his hair black. His final tour with UFO fell apart before it reached London and he resumed a chequered solo career.

Fortunately after hitting rock bottom (pun intended), for well over a decade now  the mercurial German axeman has regained his mojo and more, the Michael Schenker Fest gigs with a revolving cast of singers from his past being particularly memorable in recent years. Back under the Michael Schenker Group moniker,  and with a single vocalist in the omnipresent Ronnie Romero,  I was eagerly awaiting this thrice postponed show, billed as his 50th anniversary tour, as indeed was a healthy crowd at Shepherds Bush Empire. 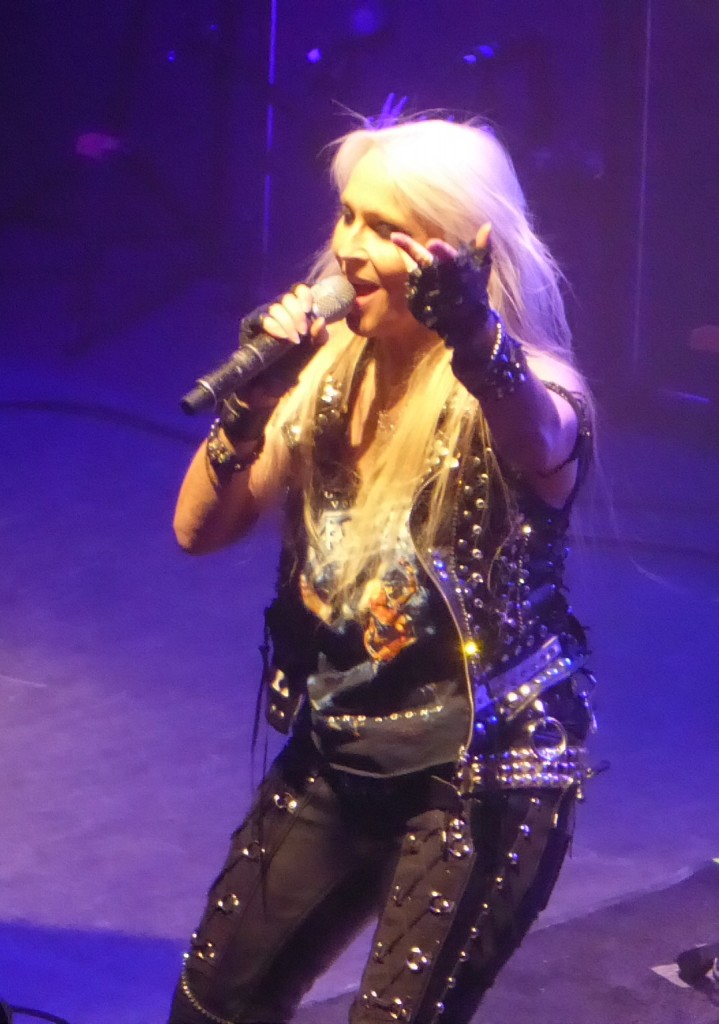 First up with a ridiculously early 630pm start was a 45 minute support set from another German metal legend in  Doro- who ironically I saw for the first and only time when Warlock supported Dio in December 1987, the exact month I first saw Schenker. However, the powerhouse blonde singer had changed next to nothing in that time and, in fairness, neither had the musical style.

Songs such as old Warlock favourites ‘Burning The Witches’ and ‘Hellhound’ and solo numbers like ‘Raise Your Fist In The Air’ and ‘Blood Sweat And Rock n Roll’ were basic but enjoyable and delivered by a very solid band. 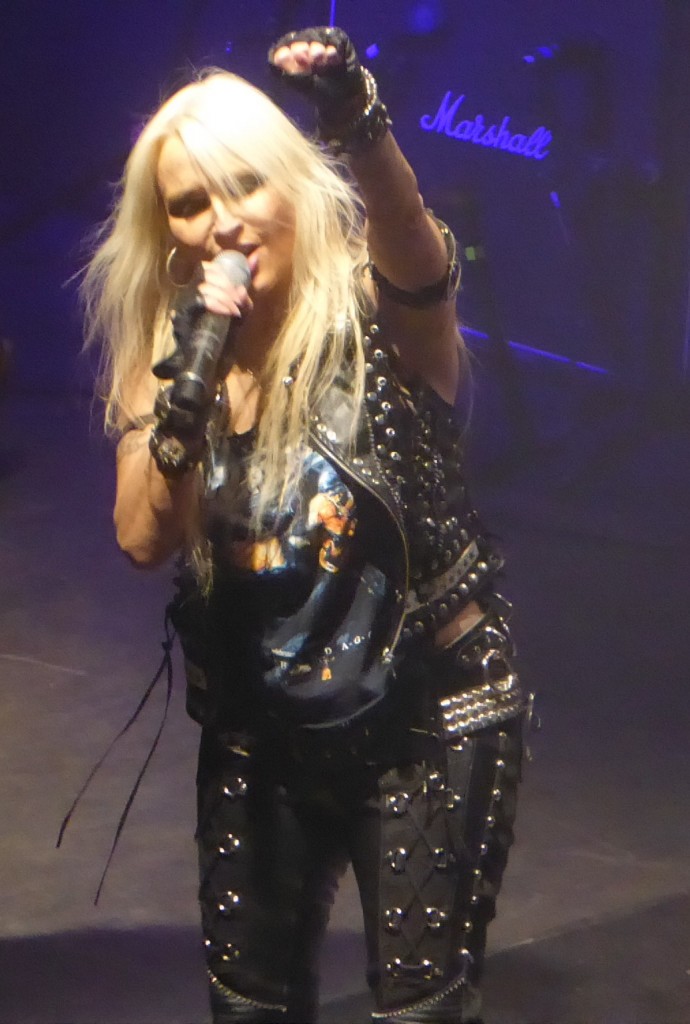 The most interesting moment was a cover of ‘Breaking The Law’ where she and one of the two guitarists delivered a slow, quiet first passage before it kicked into something more resembling the original.

Standing on a flight case for extra height, she masterfully whipped up audience participation throughout, none more so than on the highly enjoyable closer, another Warlock oldie in ‘All We Are’. While I would never consider myself a fan, I found myself surprisingly entertained. 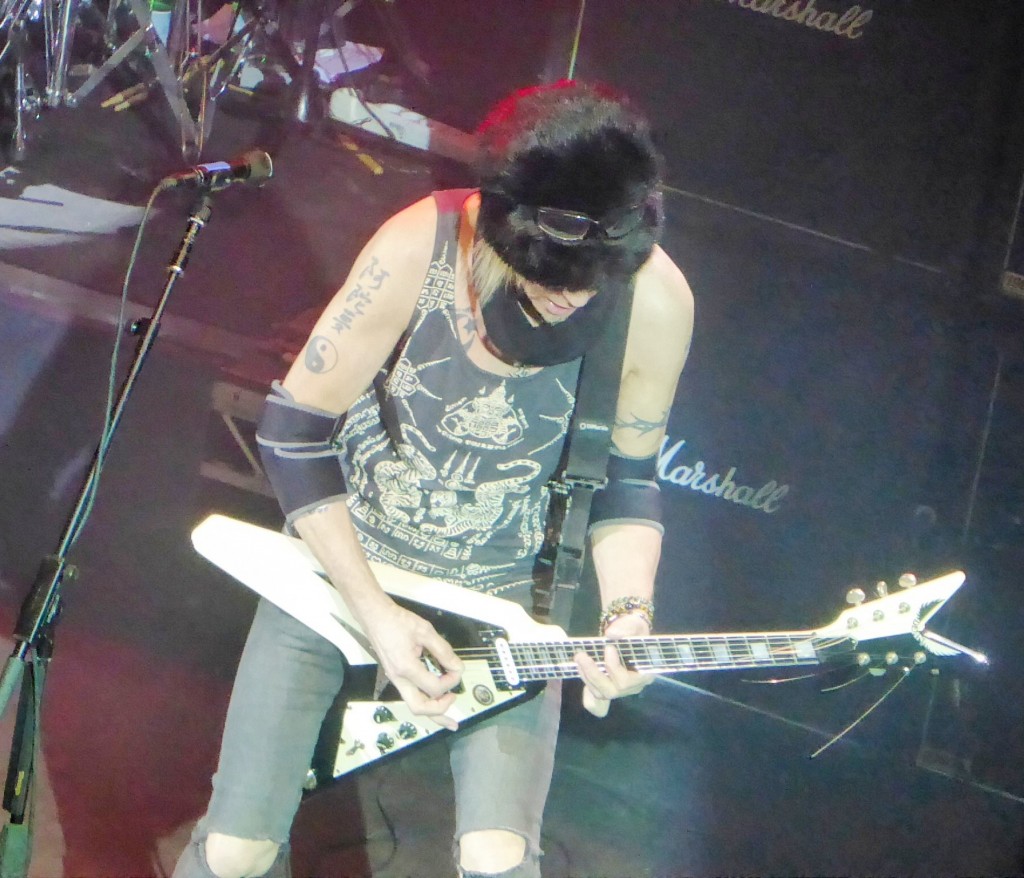 To an intro tape of ‘Highway To Hell’, Michael Schenker took his normal station to the right of the stage from the vantage point of the audience (almost exclusively blokes in their fifties and sixties), dressed as usual in his own unique fashion including a Cossack hat. These days he even handles the majority of the between song chat (which was minimal and avoided the broadsides against brother Rudolf this time), beginning with dedicating the opening instrumental ‘Ascension’ to late drummer Ted McKenna.

Ronnie Romero was then introduced – sporting longer hair and more tattoos than when I last saw him with another guitar great in Ritchie Blackmore – and ‘Cry For The Nations’ was well received with Michael in fine form on his trusty Flying V, but my thoughts on the early songs were that the Chilean’s voice was buried way down low in the mix- better that I suppose than drowning out the man most had come to see. 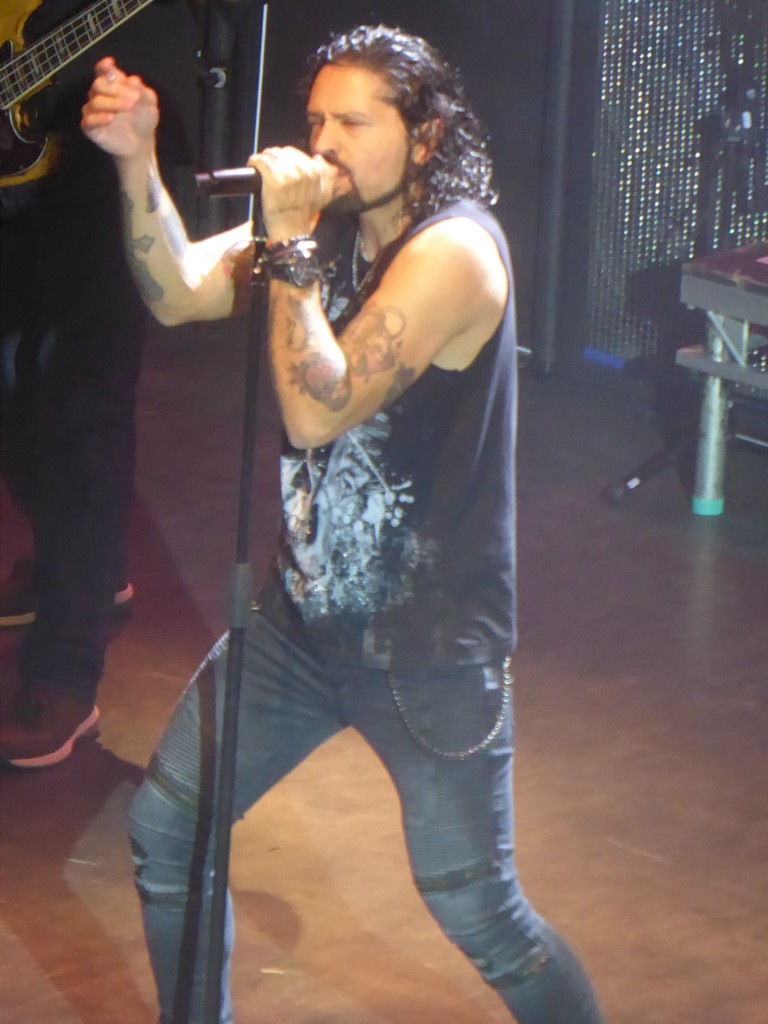 Very surprisingly ‘Doctor Doctor’ was tossed into the set just three songs in, perhaps a bit early to get the reception it deserves, but the bulk of the set was drawn fairly evenly from the classic MSG years (plus ‘Lights Out’)  and songs from more recent albums including this year’s ‘Immortal ‘.

Of the former, old favourites were present and correct like ‘Assault Attack’, a rapturously received ‘Armed And Ready’  and ‘Into The Arena’, the instrumental showing off those wonderful solos that are so melodic they are almost hummable.

However I was even more delighted by a dip into some lesser known favourites- ‘Looking For Love’ climaxing in a wonderful solo where a cascade of notes came tumbling out of Michael’s guitar without ever once  losing control; ‘Red Sky’ was rescued from the awful production of the ‘Built To Destroy’ album and ‘Rock You To The Ground’, which featured another exquisite solo, showed that while he struggled on some of the older material, Ronnie was perhaps best suited to the Graham Bonnet songs.

Among the newer efforts, he shone on the Dio-esque ‘Warrior’ and ‘Sail The Darkness’ and showed that he can sing with restraint on the ballad ‘After The Rain’, while a remake of the Scorpions’  ‘In Search Of The Peace Of Mind’ was an interesting and more progressive moment. 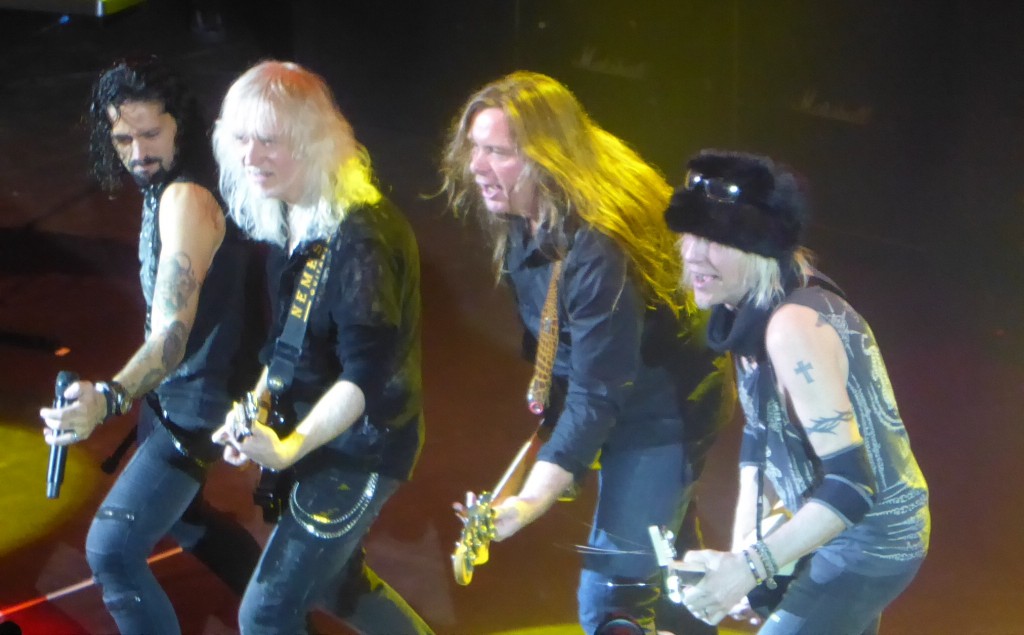 In contrast ‘Drilled To Kill’ was almost speed metal, though leavened with more fine soloing, then came the Schenker tour de force in ‘Rock Bottom’. Taking his own sweet time in bringing his lengthy solo to its crescendo, it tipped the stopwatch at a marathon 15 minutes.

The band never really left the stage as such, but ‘Shoot Shoot’ did very nicely as an encore. Thrillingly, it was not a one off but only the start of a quintet of prime time UFO classics delivered one after the other- ‘Let It Roll’, with that great solo in the middle that takes the pace right down; ‘Natural Thing’ and ‘Too Hot To Handle’ with second guitarist and keyboard player Steve Mann even given the opportunity to play a few bars of each solo; and finally ‘Only You Can Rock Me’, crowd arms swaying in unison to the instrumental mid-section. 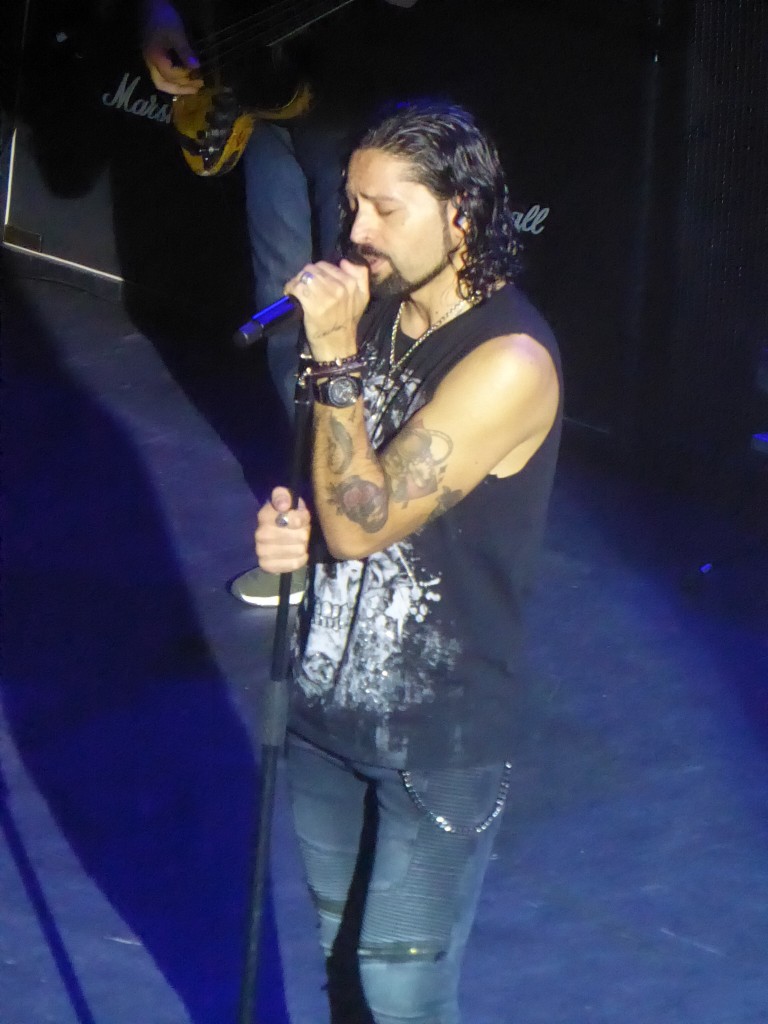 The guitar solos were authentically delivered, though Ronnie’s vocals failed to cut through convincingly and bore only a passing resemblance to the originals. But those songs represent the soundtrack to my youth and for that reason alone it was a memorable climax, not least with the uncertainty that UFO will ever play these shores again before they finally call time next year.

This show was a touch short of the greatness of the Michael Schenker Fest shows, and I was less than impressed with Ronnie Romero – albeit a view that did not find that many takers as I chatted to people afterwards. With 23 songs in an imaginative and career spanning 2 ¼ hour set,  and playing as well as ever, long may the German guitar genius continue at the top of his game. 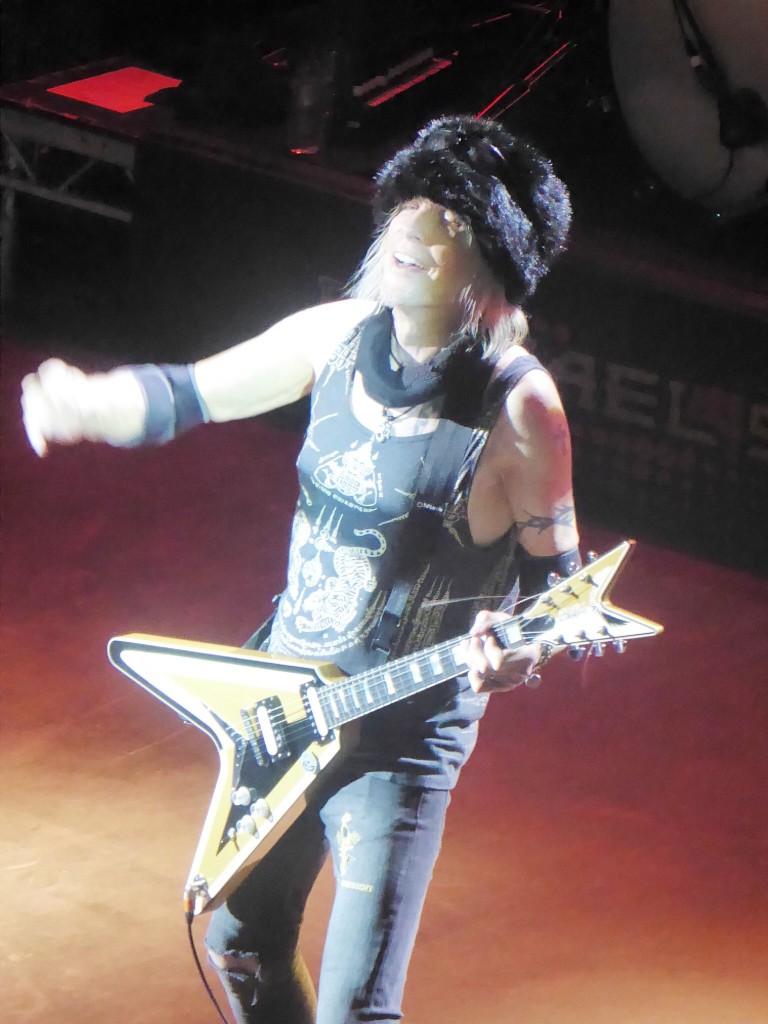