We all need some chill-out music, perhaps the more so as we enter the festive season.  A perfect antidote (and respite from socks, Scotch and smellies) could be found in the hands of two Danish musicians.

Pianist Morten McCoy and bassist Jonathan Bremer paint some appealing acoustic landscapes to soothe that furrowed brow. Where is  that f—g snow globe gin that I’d asked for?  It’s their fifth album following ‘Utopia’ in 2019.

In 1985 this would have been called “new age”.  Wistful piano over a largely acoustic bass, the album is wonderfully unobtrusive and provides a perfect backdrop to doing nothing.

Definitely an album to have on in the background of your imaginary Christmas get-together whilst contemplating your next booster jab.  **** 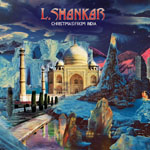 We are told COVID is here to stay in increased or diminished form and the same could be said about musical Xmas pickings.  Every year produces a different variant.

We enjoyed L.Shankar’s last album and hoped that he would bring his world music grooves to bear on the Christmas offering.  What works best are his takes on more recent ditties like ‘Do They Know It’s Christmas?’ and ‘Last Christmas.’  Applying his formula to the traditional songs doesn’t sound quite right.  *** 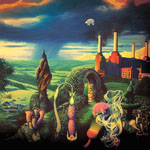 The latest in what may be a series of Floyd tributes gives a celeb-fest take on the band’s 1977 album.  As with most of these collections, the main target audience is almost certainly fans of the participants.

So, for example, if you are a Graham Bonnet obsessive you will need to hear his version of ‘Dogs’ with Vinnie Moore and Jordan Rudess helping out.

The legendary Arthur Brown talks his way through ‘Sheep’ with accompaniment from Rick Wakeman and Jan Akkerman.  But really this track is a little shambolic, perhaps more so than the original.  The clue is in the album title: reimagined rather than regurgitated.

A couple of shorter tracks (‘Pigs On The Wing’ 1 and 2) feature Martin Barre and Albert Lee respectively.  Oh, and Billy Sherwood.  He’s here!!

‘Animals’ is not the most accessible of Floyd albums and there lies the issue. For real die-hards only.  ***

FREEDOM TO ROAM – The Rhythms Of Migration

This album is one element of a triptych, the two other components being a film documentary by multi-award-winning director Nicholas Jones and an album launch concert, hosted by, and in aid of, the Born Free Foundation.

The Freedom To Roam project is the brainchild of flautist Eliza Marshall (Ranagri), who has performed with the likes of The Divine Comedy, Paul McCartney, The Who and orchestras in a variety of shows including The Lion King, Les Misérables and Miss Saigon. In addition to Eliza’s own contributions on flutes, whistles and Indian bansuri, she is joined by Kuljit Bhamra MBE (tabla, electronic tanpura), Joby Burgess (percussion), bodhran from Evan Carson (bodhran), Catrin Finch (harp and piano), Robert Irvine (cello), Lydia Lowndes-Northcott (viola), Andrew Morgan (percussion, synth, producer), Dónal Rogers (bass, piano, percussion) and Jackie Shave (violin).

The music really does live up to the song titles, be it the dark, foreboding feel of ‘Brutal’ or the uplifting refrains of ‘Coming Home’. Each musician adds their own unique sound and style to the proceedings, with the constant, yet varied sound, of percussion providing a solid theme throughout the album.

A very worthy cause and piece of music that you really can immerse yourself in. The perfect antidote to today’s hectic lifestyle that will hopefully help you reconnect with the natural world. ***1/2