Album review: AT THE MOVIES – The Soundtrack of Your Life Vol. 1 & 2

Pretty Maids Chris Laney has been watching lots of movies during the pandemic and he noticed how great the soundtracks often were. So, At The Movies was born when he enlisted drummer Allan Sørensen (Pretty Maids, Royal Hunt) and keyboards player Morten Sandager (Pretty Maids). 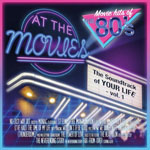 The Movie Hits Of The 80′s (The Soundtrack Of Your Life – Vol. 1) was first released independently in 2020 and now gets a re-release via the band’s new label Atomic Fire Records (who themselves are a new name, albeit featuring many years of experience in former Nuclear Blast label staff).

At The Movies don’t always go for the obvious songs either, preferring to go with ‘No Easy Way Out’ from Rocky IV, rather than the more obvious ‘Eye Of The Tiger’ or ‘Burning Heart’. ‘Maniac’ is a corker, as Strid and Egg’s vocals intertwine perfectly and there is a suitably OTT guitar solo.

Songs like ‘St Elmo’s Fire (Man In Motion)’ already had a bit of rock clout, however, it is a song like Nik Kershaw’s ‘Wouldn’t It Be Good’ (from Pretty In Pink), where At The Movies add their own musical magic. It is heavy but still keeps the original’s pop melody.

Comparisons to the Night Flight Orchestra are likely given Björn “Speed” Strid’s involvement, however, At The Movies are if anything a little heavier, as can be heard on their excellent version of ‘The Power Of Love’. Strid really gives this one a hard rocking vocal.

As an added bonus they have included their cover of Wham!’s ‘Last Christmas’ – their 2021 festive offering – and what a jolly good version it is too! **** 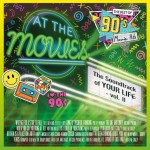 Fast forward to the 90′s for their latest album, another winner and perhaps one to win them over new fans as they revamp a few 90s pop film tunes.

‘Waiting For A Star To Fall’ (from Three Men And A Little Lady) is a chance for Linnéa Vikström Egg to take the lead and what a stunning version this is. She also makes ‘The One and Only’ her own – move over Chesney Hawkes!

‘I Want It That Way’ by Backstreet Boys? Not a problem for At The Movies who give it a full on riff makeover. Other highlights include ‘When You Say Nothing at All’ (from Notting Hill), and Jennifer Paige’s teen pop soundtrack anthem ‘Crush’, which is suitably rocked up and a fun listen.

In these crazy and difficult times music like this is a real uplift, especially as the band put so much into these classic movie songs. A Disney themed one or a dash back to 60’s could be on the cards next according to Chris Laney, but can I humbly suggests a Bond themed album? At The Movies would have a lot of fun doing that one I am sure! ****