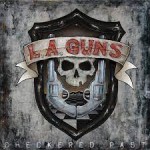 When vocalist Phil Lewis and guitarist Tracii Guns buried the hatchet and started working together again, they breathed new life into L.A Guns and, whilst retaining the sleaze and swagger of their 80’s and early 90’s heyday they brought a darker and more metallic edge to the sound of the band. New album “Checkered Past” continues the path set by its recent predecessors “The Devil You Know” and “The Missing Peace”, with consistently strong songs the band show that they are managing to age remarkably better then some of their Sunset Strip peers.

Straight out of the starting blocks is “Cannonball”, the fast paced and fiery opening track setting the stage for the rest of the album. The sleazy vibe of “Bad Luck Charm” and “Dog” harks back nicely to those early records and “That Ain’t Why” has a great groove to it.

There are though a trio of slower songs that really help showcase the dynamic of the album. “Get Along” is a Zeppelin inspired track that is followed by “It’s Over Now”, a track that is reminiscent of Alice Cooper at times and could easily have fitted in on 1994’s “Vicious Circle” album. However, it is the album’s early single “Let You Down” that steals the day here, a haunting and emotion filled number, it stands as one of the best songs throughout the band’s lengthy career.

Other highlights on “Checkered Past” include “Knock Me Down” and “Better Than You”. The albums final track, “Physical Itch”, feels like a tribute to Black Sabbath and closes proceedings in a way that will have you scrambling for the play button to repeat the album again and again.

But, “Checkered Past” is not the bands only recent album as Frontiers have also released L.A Guns “Cocked and Loaded Live”. The band performed their second album in its entirety direct from Las Vegas and as a web broadcast. The songs have aged very well, the band sound great and the stage banter is funny when you consider that there is no live audience. The addition of more recent track “Speed” shows the band are as consistent with their song writing now as they were back then.

Old favourites including “Never Enough”, “Malaria”, “Rip and Tear” and “The Ballad of Jayne” took me back decades when I watched the broadcast live and the album makes a great addition to the collection.