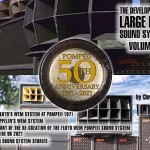 Chris Hewitt’s second volume of “The Development of Large Rock Sound Systems” is a lavishly illustrated, 500 photograph strong opus which charts the rise of big PA systems in rock music. It further incorporates the evolution of the 70’s band van companies that hired the equipment and some of the biggest equipment manufacturers.

And while it doesn’t make for a very snappy title and draws generously from the same sources and stories found in volume one, the selling point here is his focus on the 50th anniversary of Pink Floyd in Pompeii – then and now.

The role of both Pink Floyd and fellow WEM stack users Led Zeppelin is contextualised alongside bands like The Who and ELP etc, who invested in themselves to adapt to the burgeoning transatlantic rock market.

Pink Floyd at Pompeii is seen through the eyes of Scottish/French film director Adrian Maben, who shares some significant memories and summarises the Pompeii event as “A visual scrapbook of music and trivial conversation. A record of the passing of time.”

In recreating the events 50 years later, Hewitt imbues the Pompeii show with extra significant that stretches generations. And the fact that this book will sell on the back of that speaks volumes about his grasp of a niche market.

There are also some significant recollections from the late Peter Watts, Floyd’s then road manager who was an audio innovator before falling victim to rock and roll excess.

But the book is really as much about the author Chris Hewitt himself, a man whose obsession is pin pointed as having starting in 1971 when he first saw the WEM gear shot on Floyd’s ‘Ummagumma’ album.

He subsequently worked at the 1972 Bickershaw Festival, and much later the celebrated Deeply Vale Festivals.

Mark Radcliff best summarises both the man and the project thus: “Chris has a reality. He wanted to build this system and he has done it and I admire him. Those WEM stack are totemic.”

Hewitt himself says: “I built up vintage WEM equipment to be able to recreate the whole Isle of Wight and Pompeii PA’s.”

In a surreal update, he organised the recreation of Pink Floyd in Pompeii in his own Cheshire field, inviting The Australian Pink Floyd to play 4 numbers from the Pompeii set, which actually took 6 hours so they could get the correct camera angles.

He gives a generous 12 pages to this event, but as Australian Pink Floyd’s Stephen McElroy says about the experience; “The particular combination of vintage equipment has a certain sound about it. It’s different to any other system I’ve ever played through or heard.”

Given Hewitt’s meticulous attention to detail, it’s almost ironic then that the book lacks structure and a coherent introduction, but you could argue that is counter-weighted by magic combination of the eerie music played through vintage equipment with no audience, which makes the 50 year lineage leap from the pages.

Anyone who hires a 6 man crew in a Cheshire field with vintage pa equipment, a 4 camera shoot and a drone, is self evidently committed to tapping into the spirit of a particular era, of which the burgeoning PA stacks provide the backdrop.

The rest of the book is like stumbling on a treasure trove of sometimes thinly related photos, though again there’s no denying the nostalgic pull of the photo heavy chapter on band transportation which drops us straight into an era gone by.

In sum, there’s only so much you can say about PA equipment other than the pioneering role of people like WEM’s Charlie Watkins, and his ability to rise to the occasion, no matter what outrageous demands bands came up with.

A lot of the technical chronology is already touched on in volume one of this book, and while there’s a unique chapter on the author’s own role in the development and use of PA’s, it is essentially a photographic journey, which you could argue fits the coffee table nature of the book.

The book further explores familiar PA names like RSD, RSE, ASS and his own involvement in Mitrex, finishing with an updated roll call of audio practitioners.

If those acronyms don’t mean much to you, it doesn’t really matter as this is the sort of book you can skip pages and just wallow in the pictures. And even if some of them are blurred, it’s the authenticity of the time that matters.

All in all, it doesn’t make for a very well written book, but rather a passionate one which emanates from a project put together in little under 2 and a half months and one that invites you to wallow in the rise of the classic rock era. One for real rock fans only! ***½