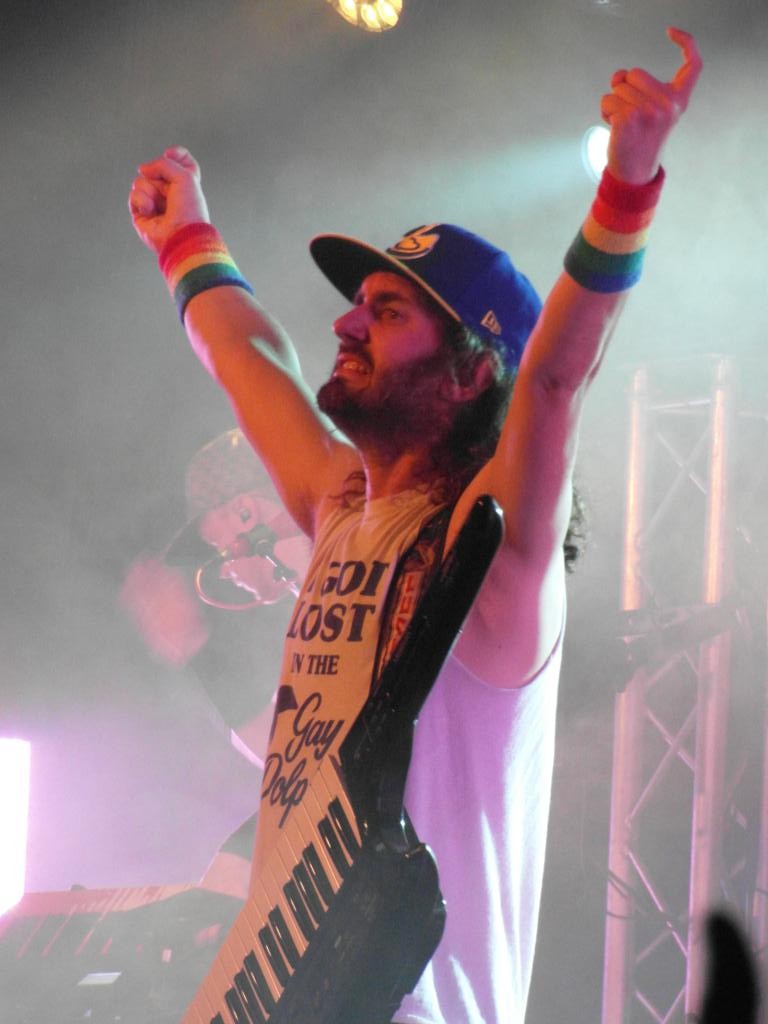 For those who are unfamiliar with Glasgow, the Barrowlands Ballroom shares its name with Barra’s market which takes up a lot of the surrounding area. The Barra’s market used to be a huge affair which attracted people from all over Scotland looking to bag a bargain. The stall holder banter was as much a draw as the items on sale and on a Sunday the area was alive.

One thing you could buy on many stalls back in its heyday was pirated videos, CD’s, tapes and many a quality bootleg live recording. So, it is a fitting venue for a night of pirate metal mayhem with those loveable swashbucklers, Alestorm! 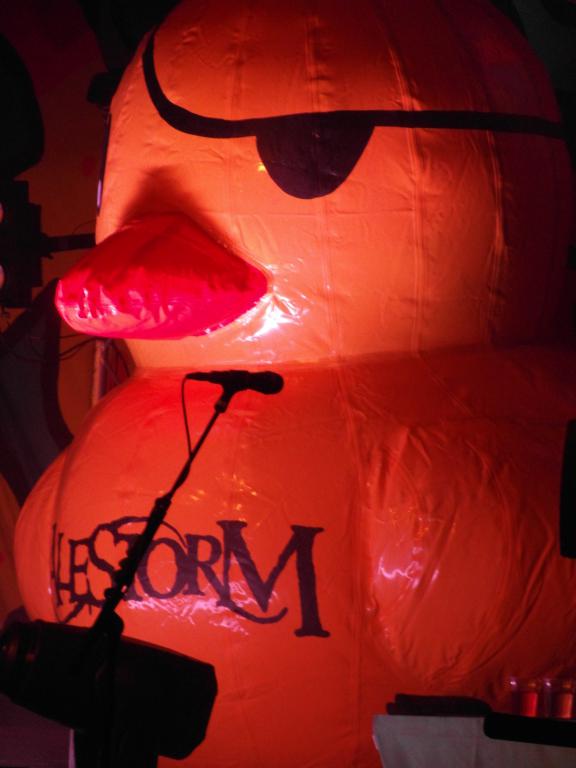 This was a good value for money three band bill which offered metal and mirth in equal measure and with all that is going on in the world at present, god knows, we all need laugh. First up to take on the ‘cheer up challenge’ were country metallers, Bootyard Bandits. The guys were already a couple of songs in by the time I finally got through the queue and into the venue and they were extoling the virtues of ‘Country Music’ to the ever growing crowd. 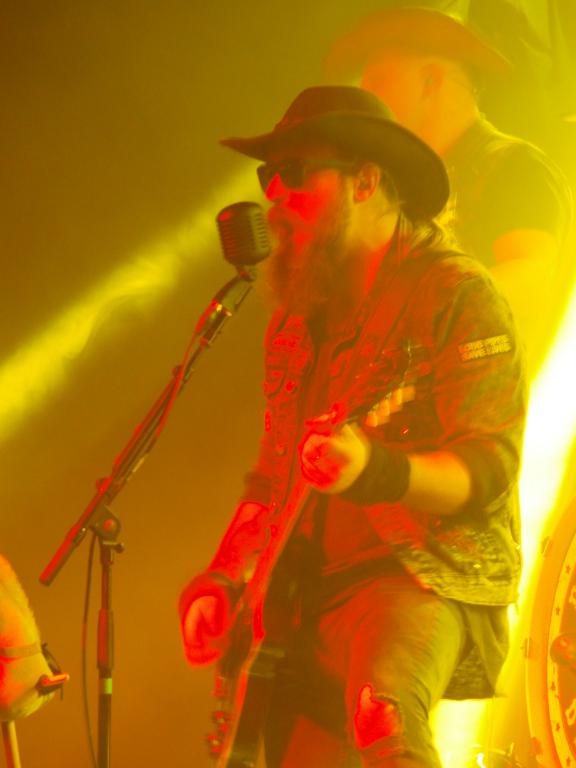 The band play up a storm of huge riffs and banging banjo that will have you line dancing and dos-a-dos-ing like your life depended on it. The band’s lyrics have been written with tongue firmly in cheek and songs like ‘Shirt Potatoes’ and ‘Cowboy and Indian Takeaway’ taken from their ‘Songs For The Saddle Sore’ album will have you laughing out loud. 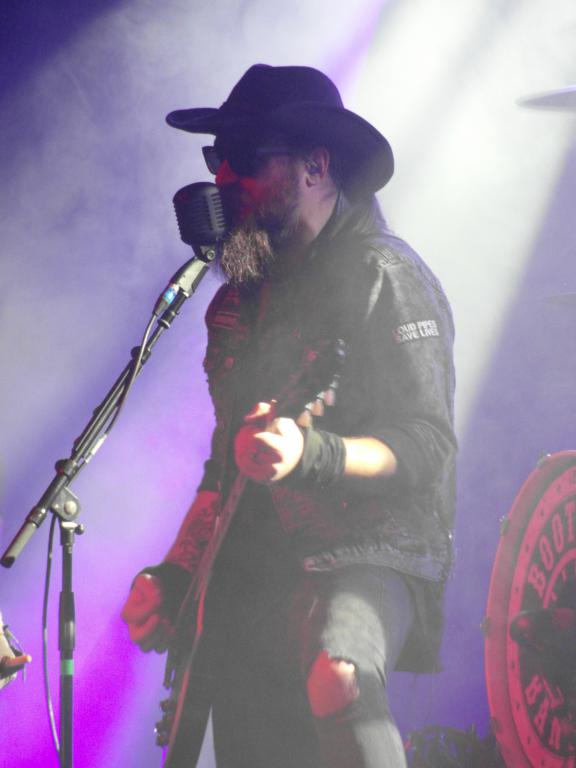 Hell, there was even a heavy metal banjo section with a few rock classics given the finger picking treatment, including a great rendition of AC/DC’s ‘Thunderstruck’. The band finished off with a rocking ‘Hoedown Showdown’ and left the stage to a huge roar from a now near capacity crowd.

After a selection of Tom Jones classics being blasted from the PA, with a life size cardboard cut out of the Welsh legend placed at the front of the stage, Gloryhammer took to the stage. There may have been a change of frontman and a few internal wrangles within the band’s ranks but no one appeared to care as the crowd went wild to the ‘Siege Of Dunkeld (In Hoots We Trust)’. 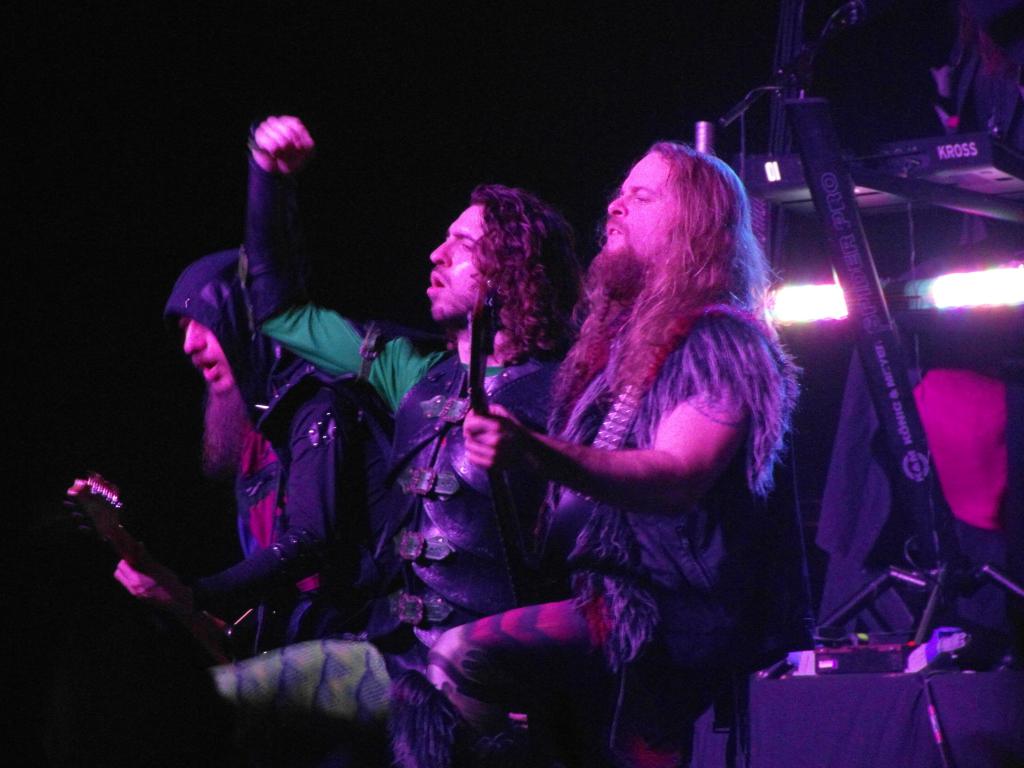 A note of admiration must go to the Glasgow crowd as it’s been a long time since I have witnessed such sustained madness throughout an entire show! They reportedly broke the record for the most crowd surfers over the Barrowlands barrier, I could quite believe it!

Gloryhammer’s Scottish themed lyrics and full-on power metal soundtrack are a winning combination, and they were treated like returning warrior heroes. New frontman, Sozos Michael, took on the persona of Angus McFife with relish and belted out his vocals with gusto. The set was awash with GH classics with ‘The Hollywood Hootsman’ and ‘Hootsforce’ going down a storm. 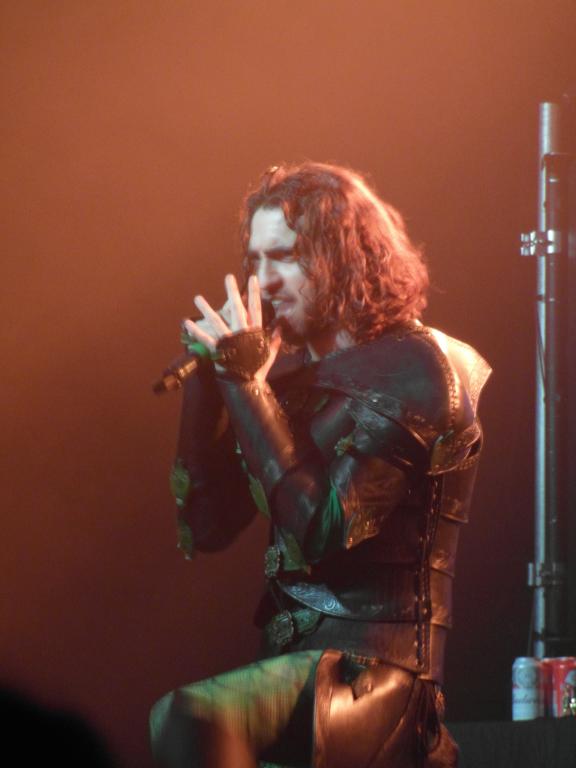 ‘Angus McFife’ got the crown into a frenzy as did the disco tinged ‘Universe On Fire’ which had everyone screaming along. We then found ourselves stampeding towards the last song with the ‘Unicorn Invasion Of Dundee’, which again saw a steady stream of bodies being passed overhead whilst punching the air and singing along. Pandemic… what pandemic?

Another stage set up, this time accompanied by Queen classics that became a big karaoke session, especially when ‘Bohemian Rhapsody’ got an airing, all good fun. By 9.30 however, Alestorm had laid anchor and hit the stage with ‘Keelhauled’. It would also appear that someone lit gunpowder under the crowd as it exploded in a hail of flying fists and bouncing bodies. 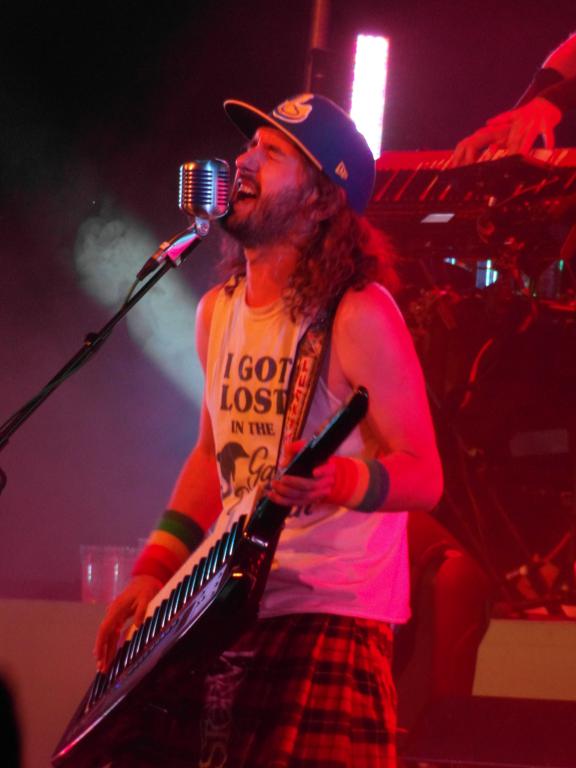 ‘Treasure Quest Party Chest’ and ‘Mexico’ kept the momentum up as Christopher Bowes navigated the crew through the opening numbers. Christopher then addressed the crowd lovingly as ‘Weegie scum’ before introducing another crowd favourite, ‘Sunk’n Norwegian’. Alestorm may play it for laughs but the music is always spot on and the playing top notch. ‘Shipwrecked’ and ‘Alestorm’ sailed past’ and we were then transported to ‘Tortuga’, complete with a guest appearance from Captain Yarrface on the rap section. 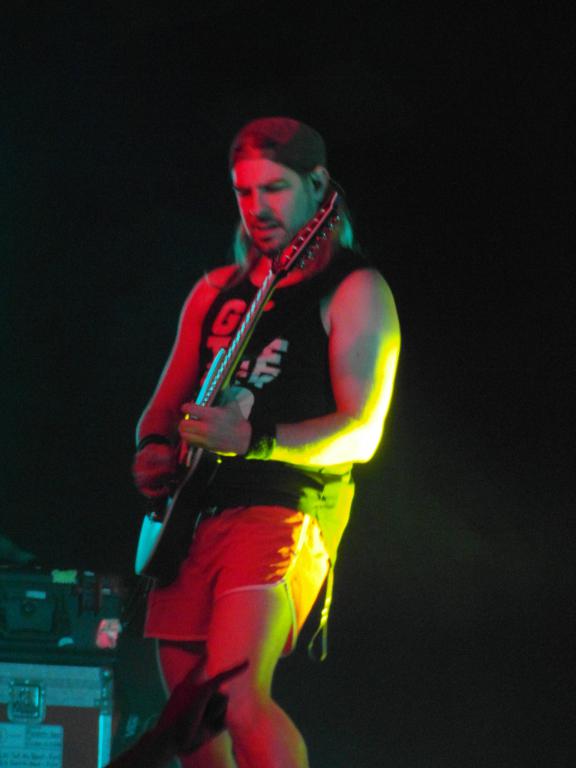 A large portion of the crowd then sat and rowed for their lives as the tale of ‘Nancy The Tavern Wench’ was played out, always a fun one to watch. A very quick blast of ‘Rumpelkombo’ then led into the epic tale of the battle of Cartagena in 1741 which ably displayed the excellent guitar work of Mate Bodor and the rock-solid rhythm section of Gareth Murdock on bass and Peter Alcorn on drums. 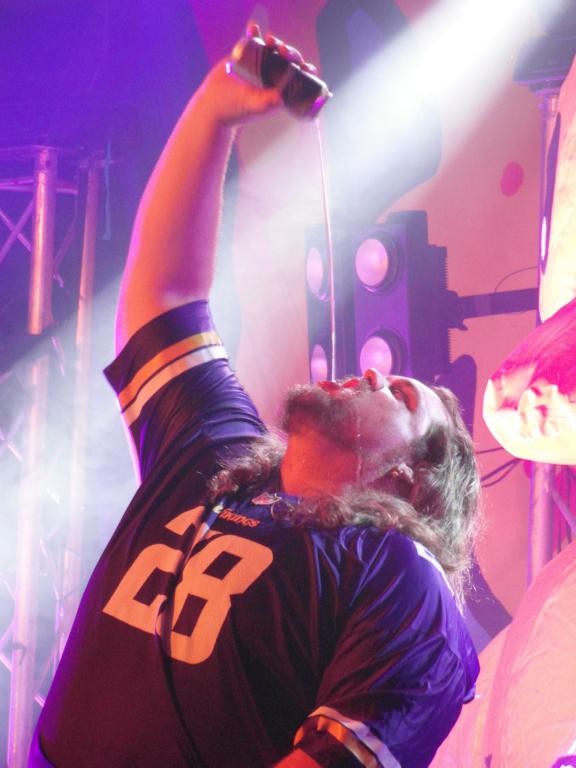 The band were joined on stage by the man mountain that is Luke Philp, frontman of the band Lagerstein, for ‘Hangover’ which was preceded by Philp downing two cans of lager in seconds, quite a feat. We were then transported to the frozen ‘Magnetic North’ before a bit of Eurovision nonsense with ‘Wolves Of The Sea’. ‘Zombies Ate My Pirate Ship’ saw a reappearance from Luke Philp, this time in a flowery dress, to lip sync along to the female vocal part mid song much to everyone’s amusement.

Another crowd favourite followed with the legend of ‘Captain Morgan’s Revenge’ before the chant of ‘Your pirate ship can eat a bag of dicks’ rang out during ‘Shit Boat (No Fans)’ which brought the set to a climactic close. 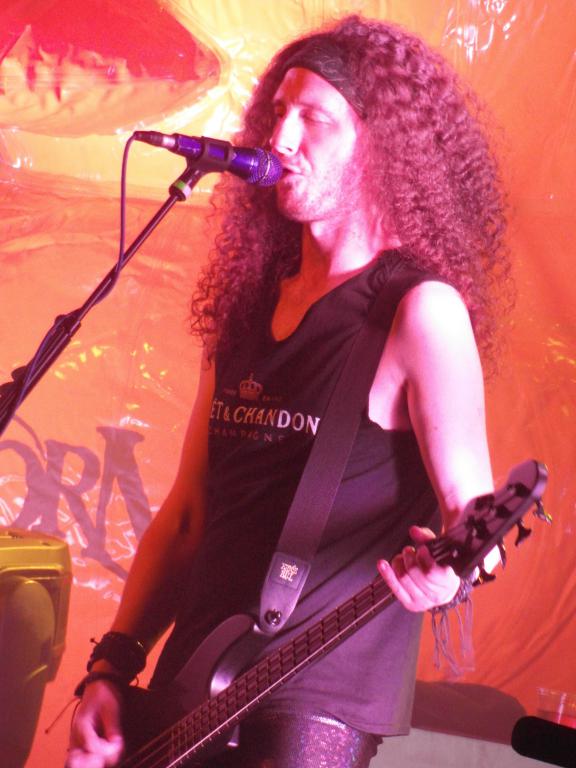 There was still time for a few more though and with a cry of ‘Haw you, gie’s a beer’ Christopher led his merry crew on a search for what ‘Drink’ they could find. ‘Pirate Metal Drinking Crew’ then summed up the Glasgow crowd perfectly leaving only one song to round off the night. ‘F**cked With An Anchor’ closed the show in fine style with a mass singalong and many middle fingers raised across the hall. 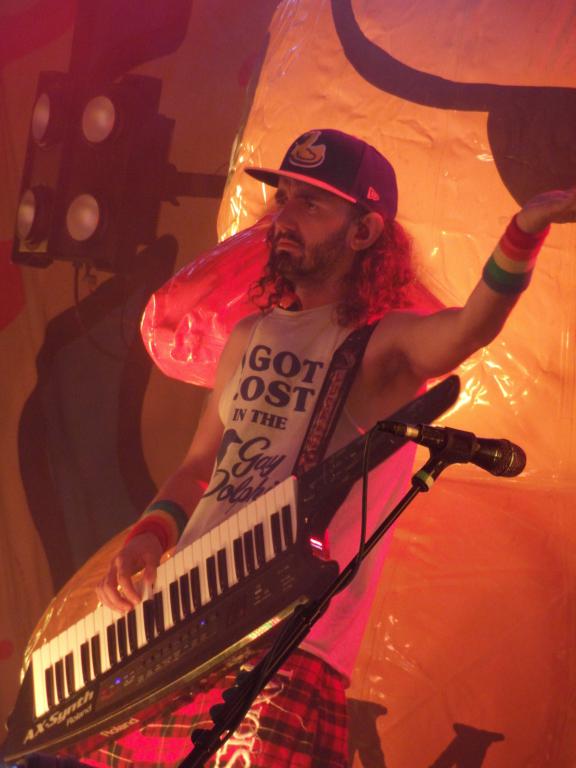 It might not be big or clever and I am sure some would consider Alestorm puerile and offensive, but that is the point. This is pure escapism for a few hours, away from the real world and all that currently entails. So, I urge you to set sail with Alestorm the next time you get a chance and let them pressgang you into the piratical way for a few hours, believe me you won’t regret it, now where’s my cutlass…