Taylor Young drummed for the likes of The O’s, Young Heart Attack and Polyphonic Spree. Now he takes on the role of band leader and is joined by guitarist, vocalist and producer Toby Pipes (Calhoun, Deep Blue Something, Little Black Dress), guitarist Michael Smith and drummer Austin Green.

It starts off with a bang as ‘Get Around’ is a gloriously uplifting mix of the Byrds, Tom Petty and the Travelling Wilburys. The following song ‘Make You Want To Stay’ isn’t too shabby either, setting out the band’s stall as purveyors of jangly pop rock. ‘Blue Eyed’ is another winner and in the 90s this one would have been all over the airwaves and ‘Out Of My Mind’ lifts the closing end of the album.

A tad one paced at times, yet it has enough gems to warrant further investigation. *** 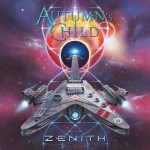 Album number three in as many years from Autumn’s Child, Mikael Erlandsson’s sequel if you like to Last Autumn’s Dream, who appear to be on permanent hiatus.

‘Emergency’ starts things of in style, a great piece of melodic hard rock with a Jona T. keyboards solo too. ‘Love Is A Fighter’ is another decent melodic rocker, however, ‘High On Love’ and ‘Crowdpleaser’ are very similar to recent output from fellow Scandi melodic rock bands. At the lighter end of the scale ‘Heaven Can Wait’ and ‘Damaged Goods’ show that Michael Erlandsson still has that wonderfully melodic vocal, with a gritty bite.

Not likely to feature on any year end ‘best of’ lists, however, what you do get it is high quality melodic hard rock and a decent listen. ***