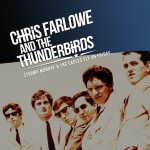 This 3CD set brings together more than 50 newly remastered tracks, recorded by the R&B/soul powerhouse Chris Farlowe between 1962 and 1969. It’s an eclectic mix of studio, radio session and live tracks, and a definitive way to mark this period of his career. The 16-page booklet contains full credits, entertaining notes by Spencer Leigh, and several photos/images.

CD1 rounds up his early A & B-sides, along with EP and album cuts. These include two Cyril Stapleton numbers, originally credited to The Beazers (‘The Blue Beat’ and ‘I Wanna Shout’) as well as T-Bone Walker’s ‘Stormy Monday Blues (Parts One & Two)’ which were released on the blues label Sue under the pseudonym of Little Joe Cook.

Other impressive cuts include Rudy Clark’s ‘Itty Bitty Pieces’, Chuck Berry’s ‘Reelin’ And Rockin’’, and a fiery take on Leiber/Stoller’s ‘Hound Dog’. Of the self-penned material, ‘What You Gonna Do?’ is a bluesy gem, while the joyous ‘You’re The One’ has something of a gospel feel. The classic ‘Buzz With The Fuzz’ was banned by the BBC at the time for its drug references, and is now regarded as a mod anthem.

CD2 contains almost an hour’s worth of tracks recorded for the BBC. Highlights include ‘Watcha Gonna Do Baby’ (a co-write with Albert Lee), a rollicking ‘Rockin’ Pneumonia And The Boogie Woogie Flu’ and a fine cut of the Andrew Loog Oldham / Tony Russell song ‘Don’t Just Look At Me’. Chris’s love of soul is represented by Otis Redding’s ‘Mr Pitiful’ and the James Brown number ‘I Got You (I Feel Good)’.

Chris is still best remembered for his UK #1 hit ‘Out Of Time’. Written by Mick Jagger and Keith Richards, there’s a lively version here from 1966’s Easybeat programme. Other choice covers include ‘What Becomes Of The Broken Hearted’, ‘Summertime’, an epic ‘Moanin’’, and a guttural snarl from Chris on the swirling ‘Gemini’. Two of the “new to CD” tracks were recorded in 1968 for The Blues Roll On – Jimmy Reed’s ‘Baby What You Want Me To Do’ and the aforementioned ‘Stormy Monday Blues’.

CD3 features a rare live show from 1965, recorded at the Flamingo Club in Soho where the band had a residency. This is an energetic performance and captures the band on killer form, with a line-up of Farlowe, Albert Lee, Dave Greenslade, Bruce Waddell and Ian Hague. Greenslade’s Hammond organ is up in the mix for a couple of instrumentals early in the set – ‘Chicken Shack’ and ‘You Can’t Sit Down’. Crowd favourite ‘Buzz With The Fuzz’, James Brown’s ‘Think’ and a groovy ‘In The Midnight Hour’ are all standouts in a fine set. Sound quality is a little on the lo-fi side, but this doesn’t detract at all from the enjoyment of hearing a band on fire in front of an appreciative audience! ****