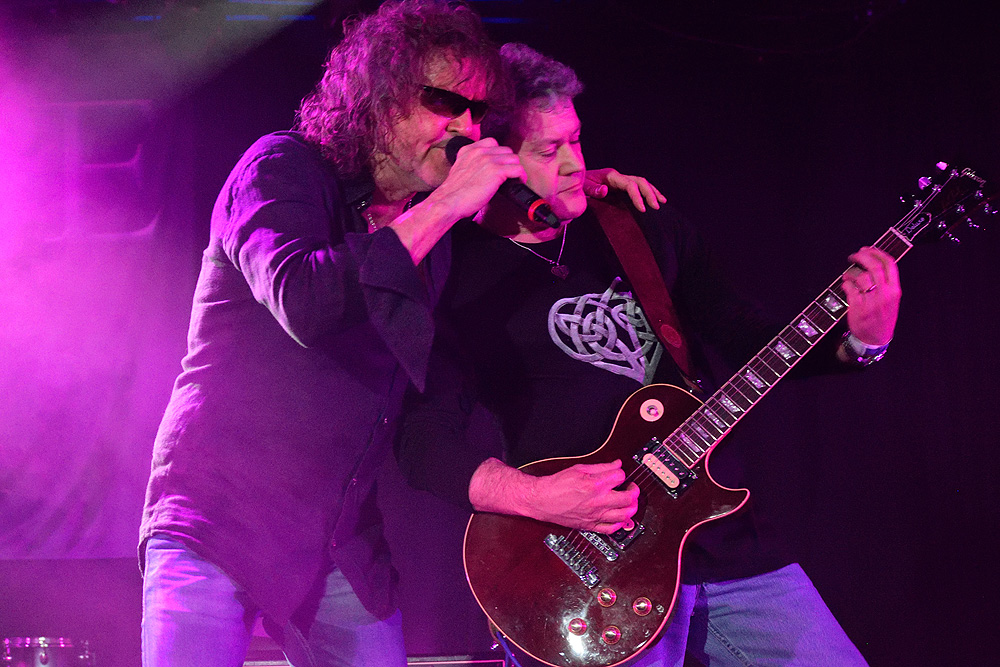 Alestorm begin work on their next album, ‘Seventh Rum Of A Seventh Rum’, which will be released on Napalm Records later this year.

Big Big Train recently released ‘Bats In The Belfry’, composed by the band’s drummer Nick D’Virgilio, and it will feature on the band’s forthcoming ‘Welcome To The Planet’ album due at the end of this month.

The Black Sabbath albums featuring Tony Martin have been signed up by a label for re-issue for a box set release.

Demon plan to release a new album this year.

Blue October will start recording their next album in February.

Bruce Dickinson will resume work on his latest solo album in the spring.

GWAR will release their new album, ‘The New Dark Ages’, on June 3.

Elton John’s guitarist Davey Johnstone releases his second solo album, ‘Deeper Than My Roots’, on February 3. His first solo album came out in 1973.

Peter Knight & John Spiers release a new album, ‘Both In A Tune’, on February 11.

Kreator will release their new album in the summer with a single due in the next couple of months.

Lionheart release an expanded version of their 2017 album ‘Second Nature’ on January 21 via Metalville Records.

Megadeth‘s sixteenth studio album, ‘The Sick, The Dying And The Dead’, has been pushed back to a summer release.

Meshuggah have released a new single, ‘The Abysmal Eye’, from their forthcoming album ‘Immutable’, set for release on April 1 via Atomic Fire Records.

Moby releases ‘Reprise – Remixes’ on May 20 via Deutsche Grammophon.

Keith Richards will release a 30th-anniversary Super Deluxe Edition of his second solo album, ‘Main Offender’, on March 18. It will include a double-LP and CD of the previously unreleased concert ‘Winos Live in London ’92′.

Joe Satriani releases his new album ‘The Elephants of Mars’ on April 8 on earMUSIC.

Chris Caffery revealed in a recent interview with That Metal Interview that he has been working with Jon Oliva on new Savatage music. There are currently no plans to record formally due to the lack of a record label at present.

Sam Sweeney has announced ‘Solo’ (4 February), the first in a series of EPs that will highlight different members of the band who performed and recorded on his 2020 album ‘Unearth Repeat’.

King’s X guitarist, songwriter, and co-vocalist Ty Tabor has announced his new solo album, “Shades”, is out on March 4 via Rat Pak Records.

Trick Or Treat will release their new studio album, ‘Creepy Symphonies’, on April 1 via Scarlet Records.

Tygers of Pan Tang release an EP  ‘A New Heartbeat’ on February 25 via Mighty Music.

Warrior Soul release their latest album ‘Out On Bail’ on March 4 via Cargo.

Steven Wilson plans to release his next solo album in 2023 and it is likely to be a concept album.

Former Status Quo drummer John Coghlan has announced he is retiring after a UK farewell tour this year.

Asia are planning 40th anniversary tour dates in the US this year. The line-up will feature original members Carl Palmer and Geoff Downes.

Coldplay have announced they will stop making music after 2025.

Vinyl hit a new sales record in 2021 with ABBA’s ‘Voyage’ the biggest seller.

David Bowie’s music catalogue has been sold to Warner Music, whilst David Coverdale has sold his rights to his Deep Purple and Whitesnake songs to Round Hill Music, who recently brought the rights to Heart’s Nancy Wilson’s songs.

Cliff Richard has again topped the sales charts for music calendars in the UK.

Tesco is reportedly phasing out CDs and DVDs in its UK stores, with plans to stop selling both formats by the end of February.

The Ronnie James Dio documentary is set to air later this year.

Thorsten Bauer has announced he is leaving both Leave’s Eyes and Atrocity.

Fozzy have parted ways with long-time drummer Frank Fontsere who has been replaced with Grant Brooks (Through Fire).

Guitarist Mick Sweda  and drummer Jimmy D’Anda are no longer part of the BulletBoys, who reformed with their original line-up in 2019.

Heavy Pettin’ are looking for a new bassist after Jez Perry left the band.

IO Earth have announced that they have singer Rosanna Leferve.

Brian Tichy is back on the drumstool for the Dead Daisies.

Soilwork have recruited bassist Rasmus Ehrnborn as a full-time member

Meat Loaf whose ‘Bat Out Of Hell’ album is one of the best-selling of all time. “We know how much he meant to so many of you and we truly appreciate all of the love and support as we move through this time of grief in losing such an inspiring artist and beautiful man,” Meat Loaf’s family said in a statement. “From his heart to your souls … don’t ever stop rocking!”

Ronnie Spector of the Ronnettes

Producer Kit Woolven who worked on albums by UFO and Magnum, amongst many others