Album review: THE DAVEY JOHNSTONE BAND – Deeper Than My Roots 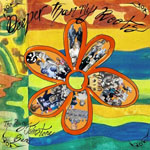 49 years after his ‘Smiling Face’ debut album, Elton John’s guitarist Davey Johnstone is back with a subtly produced singer-songwriter driven album called ‘Deeper Than My Roots’.

It’s a well crafted pop-rock album illuminated by fine playing and fashioned reflective material that harks back to his musically formative years of the late 60’s.

The title may also suggest reference to the fact that it’s a family made album, with the Johnstone clan remarkably tapping into Davey’s musical lineage, while daughter Juliet provides the art work.

His 16 year old son Elliot handles all the vocals except for the anthemic ‘Boxer In The Corner’, which features Davey himself.

The Keyboard playing Charlie Johnstone recorded the basic tracks and adds bv’s, while drummer Jesse and his eldest Tam co-wrote the 2 instrumentals which give us a deeper insight into Davey’s musical abilities.

Aside from being an in demand session guitarist, Johnstone senior has built his own musical niche by colouring songs with salient guitar parts.

And he does exactly that on ‘Black Scotland’. The first of 2 instrumentals, he revels in a layered multi toned groove.

Helmed by the late Elton John’s bass player Bob Birch, it’s bathed in echo reverb to which Johnstone adds his own lightness of touch and a sinewy tone that sharpens the melody and leads to controlled feedback and a sitar outro.

In contrast, the other instrumental ‘Walt Dizney’ slips into a slide guitar led Floydian bluesy undertow, before taking a Celtic flute-led direction with choral parts and a tubular Bells feel at 3.10. Curiously his melodic guitar flurry stops just short of giving the song a climactic resolution.

Both tracks offer a counter-weight to the overall singer-songwriter material and fit the sequencing perfectly to facilitate flow.

Johnstone was originally a multi instrumental folky and you can still hear his early influences here, albeit interspersed with Beatles elements which bubble up intermittently.

Other than the manner of its recording, it’s an album that eschews commercial or contemporary considerations, focusing instead on his true self. He draws on The Beatles, Floyd and folk etc to forge his own style across genres to great effect.

He has the master touch of an arranger, being strong on structure and always allowing the music to breathe organically.

He’s in his element collaborating with his family members which gives him the kind of personal sounding album that would surely make Elton smile.

The hypnotic ballad ‘Melting Snow’ initially feels like early Neil Young, but Elliot’s emotive vocal makes it all his own. It’s an impressive lead single, with jangling guitars, warm phrasing, a drifting organ, nuanced strings and lots of space to let the melody linger.

It also has a laid back quality that lies at the core of all good singer songwriter albums.

The opening ‘Go Easy On My Heart’, has a distant echo of Lennon’s ‘Walls And Bridges’ (with a slight Roy Orbison flutter on the vocal), while ‘One Look In Your Eyes’ mirrors ‘Blue Jay Way’ and Fab 4 style bv’s.

The harmonies of ‘Deeper’ could have come from ‘Abbey Road’, and he finally reveals his full hand with a bonus cover of ‘Here There & Everywhere’.

Aside from The Beatles, he draws on a range of influences like the proverbial painter uses his palate to colour a very accessible pop album.

The songs draw the listener in via melodies, hooks, intricate instrumentalism and a deft production.

On the Portuguese titled ‘Meu Amor’ he employs an acoustic percussive approach bordering on a Latino feel, which perfectly fits the reflective lyrics, while ‘You Lied To Me’ is a poppy ballad with dramatic strings and a Lennon vocal inflection on the outro.

And there you have it. It’s tempting to say that he’s soaked up sundry influences from his career and refracted them through his own wonderful playing ability, the family genes and a pop sensibility that down the years has made Elton John who he is.

A belated solos career calling card, ‘Deeper Than My Roots’ strikes a perfect equilibrium between his own musical antecedents and his family’s contemporary collective abilities. The Johnstone lineage is in good hands. ****