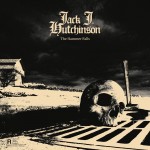 Hard rocker Jack J. Hutchinson tells us: “We’ve thrown everything but the kitchen sink at this record.” And yet while ‘The Hammer Falls’ is his heaviest album so far and the title may suggest an emphatic finality, this has more to do with the way he nails his versatile musical direction – think hard rock into metal, prog and rock-blues – rather than the end of a musical journey itself.

‘The Hammer Falls’ bursts with creative exhilaration in which the booming riffs and rumbling rhythm section are an integral part of a broad based canvas, which pulls several related style under the New Wave of Classic Rock umbrella.

There’s enough passion, intensity and virtuosity here to match meaningful lyrics and lilting melodies. A melange of double-time rhythms, fleeting shreds and unexpected tempo changes never overstay their welcome and all contribute to a coherent accessible album that rocks hard.

He also achieves that rare thing of delivering a familiar rock template with imaginative twists and turns, stamped all the way through like a stick of rock with his own essential DNA.

Hutchinson also strikes fine balance between the organic feel of a ‘live band in the studio’ power trio – a rarity in these remotely recorded times – and an overarching production, which frames the narrative driven songs with a wall of sound.

Rather than dominating the album, the big production provides the perfect backdrop for a mix of fine band interplay; Jack’s ripping solos, the contrasting dynamics and catchy hooks.

All the elements bubble up on the stop-start feel of ‘Down By The River’. The song is fuelled by an imperious drive, punctured by sudden tempo changes, doctored vocals, ever present riffs and is powered to its conclusion by a thunderous rhythm section.

Bassist Lazarus Michaelides and drummer Felipe Amorim, give the band power, versatility and fluidity, as exemplified by the sledgehammer opener ‘Straight To Hell’, complete with Hutchinson’s quasi Ozzy Osbourne vocals and expressive shred.

They also provide the rock solid foundation to a bone crunching title track, which accurately reflects the song’s title.

Their mellifluous presence puts me in mind of later career Rush, as they forge the perfect canvas for Hutchinson’s array of vocal and guitar styles, which by turns, engage, rupture and resolve.

I also have to declare a personal bias from the outset, which is that I’ve never too convinced by too many tempo changes, as they always suggest an impatience born of an idea that has outgrown its usefulness.

Hutchinson overcomes any potential pitfalls by broadening his musical range. He restlessly barrels down different musical avenues ranging from the laid back Floydian acoustic-into-wash and proggy Mellotron sound of ‘Angel of Death’, to the staccato intro and big hook of the single ‘Call Of The Wild’.

His unfettered explorations even overcome a dirgy intro and faux doom-metal vocal on ‘The Raven’s Crow’, as he successfully transforms it into a fattened groove.

He revels in contrast throughout, from the juxtaposed vocal and guitar parts to the use of a quiet-to-loud dynamic to contrast, which provides contrast and links the verses and hooks.

In short ‘The Hammer Falls’ is the album on which Hutchinson has finally set out his stall. On ‘Gunslinger’ for example, he’s unafraid to virtually rebuild the track from the middle onwards, as part of a musical journey that features different shades of a significant whole.

He then belated reveals his more commercial side on the repeated hypnotic hook of ‘What Doesn’t Kill You (Only Makes You Stronger)’ with a big wall of sound subliminally that comes close to Oasis, before a purposeful shred leads him to rock out on a repeated hook.

The current single release ‘Halo’ promises rich reward, with an uplifting chorus and pulsating riffs which summarise the sheer zest of an album that envelops the listener via some well thought out sequencing.

The closing ‘World On Fire’ provides a perfect restatement of all that has gone before in terms of its structure, interplay and riff age, though he only find his way back to the catchy hook via an effective slow building bass-led progression and pregnant pause.

And while the band rocks hard, co-producers Josiah J. Manning and Josh Norton Cox give the album a visionary, post Zeppelin bombast with which to highlight the salient solos, melodies and hooks.

In short, as the album title suggests they capture the spark where ‘The Hammer Falls’, which is where we came in. ****