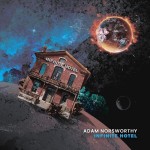 ‘Infinite Hotel’ is the perfect title for an album that searches both lyrically and musically for a place beyond.

Built round the concept of the human species moving from planet to planet, or in this case through infinite hotel rooms, it’s not quite a metaphysical album, but rather 12 songs that search beyond the normal realms to uncover meditations on love and loss with plenty of reflection, and as on a parallel project of his, The Mustangs ‘Watertown’, an ecological theme.

It’s a well crafted album on which Adam Norsworthy cleverly disguises the limits of his vocal range by adhering to the values of restraint and evocative phrasing. His lyrical mysticism is also coated in an enveloping sound.

There’s a mellifluous flow throughout the album, starting with the riff-led urgency of the thematic opener ‘Bridges To The Moon’, which includes the first of 2 celebratory ‘woo-hoo’ refrains on the album to suggest the big getaway: “Another trillion dollars, for everybody’s pocket, to build a deadly rocket, what are we waiting for here.”

Then there the wistful, almost waltz like quality of ‘In Time I Will Forget You’ and the atmospheric 80’s sounding ‘Rise With You’ – complete with producer/ drummer Wayne Proctor’s Chester Thomson style drum breaks – to the gentle paced bookend of ‘Bullet Proof Man’.

The latter is similar to ‘I May Not Be Here In The Morning’, as it opens with a Harry Chapin tenor style phrasing before settling on a whispered approach.

The featherlight balance between Norsworthy’s colourful lyrics and his expansive music is best evidenced on the almost ghostly ‘Meet Me At Midnight’, which features a pulsing harmonium sound over a subtle drums.

And when he hits the defining line; “meet me at midnight when the moon in high,” he pushes himself to the limit of his range and sounds like an emotional David Bowie. It’s an influence that bubbles up again on the opening lines of ‘Jericho’.

‘Infinite Hotel’ revels in subtle grooves, especially on the guitar, funky keyboard and electric Fender Rhodes sound of ‘Turn Your Love Around’, while the two succinct guitar solos tell us all we need to know about an artist serving the song.

‘Infinite Hotel’ benefits from a consistent layered sound with a plenty of variety, as on the acoustic-into-electric ‘Lost In The Cinema’  the funky electronic feel and punchy hook of the post- punky ‘Now I’ve Got Your Love’ and the atmospheric ‘Rise With You.’

It’s a colourful musical palate that help illuminates his aching heartfelt lyrics, as on the cinematic (pun intended)  ‘Lost in the Cinema’, a tale of a tentative big screen back seat lover: “As we sit here in the darkness, Not knowing what these characters will do, I’m nervous as a child,  lost in the cinema with you.”

He’s wistful and reflective on ‘In Time I Will Forget You’, a song that opens with a very Aynsley Lister sounding guitar figure.

My only reservation is that by the slightly worn out concept of Jericho’ the albums mid-paced feel begins to drag a little, a fact he may have tried to counterweight with this slightly jaunty track and its belated guitar solo.

He finishes with ‘Bullet Proof Man’ a song that is in sharp thematic contrast to what’s gone before and is about a lack of emotional engagement.

‘Infinite Hotel’, isn’t an easy album to categorize, save for its weighty themes and singer songwriter antecedents. Happily the songs are strong enough to overcome any genre restrictions as he confidently strides over rock, pop, blues, funk, and folk influences.

His crossover style brings out the best in his esteemed musical guests who provide enough sizzle to make this excellent album stand out in a busy market place. ****