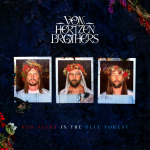 Described by the 3 Von Hertzen Brothers – Kie, Mikko and Jonne – as 70 minutes of art rock, ‘Red Alert In The Blue Forest is a concept album written separately by all 3 brothers during lockdown and then brought together under an overarching eco-concept.

It’s an album that works hard not to suffocate under its own weight, as it tackles big themes such as mankind’s impending destruction. This makes for some heavy rock and startling dynamics, which are frequently offset by more intricate percussion and occasional acoustic interludes.

The opening ‘Day of Reckoning’ is an excellent template of what to expect, with a  Jon Anderson style falsetto (think Yes’s ‘Close To The Edge’) and anchored by a Chris Squire style rumbling bass.

It’s all breathlessly resolved by a repeated uplifting line; “In this universe,” while ‘Blue Forest’ further sets out the theme of:  “the wonders of life, why did we leave them to die.”

The brothers have the ability to switch genres without losing their won DNA, as on ‘The Promise’, which incorporates a Celtic feel with a big chant that could be 80’s Tull.

And in so briskly skipping genres and further exploring ‘quiet-to-loud’ dramatic moments, they build an impressive undertow that gives the album its propulsive drive.

The very catchy ‘All Of A Sudden Your Gone’ is a notable highlight , being a catchy harmony laden melody with a plaintive Pye Hastings (Caravan) style vocal, until a trademark gut-busting rush of adrenalin topped by another Jon Anderson style falsetto on a climactic finish.

The Pye Hastings vocal style re-appears much later on the reflective, acoustic ‘Söderskär’. Sitting deep into the album, it’s a meditative piece about a Finnish lighthouse in the outer archipelago of Porvoo, a location that sparks more imaginative lyrics.

The Yes style vocal blocks also play a significant role in on the muscular structure of ‘Elbows,’ a track on which the rather mundane lyrics fail to match the musical bombast.

‘Red Alert In The Blue Forest’ pulls the listener from pillar to post as it explores related rock styles and reaches a high point on the evocative ‘Northern Lights’.

They are in their element on this eerie synth layered piece, delivered over gentle percussive brush strokes as they capture the wonders of the aurora, as it shifts from the barely perceptible to the luminescent.

The big vocal sweep is the defining layer of an exhilarating track which succinctly captures the bands muscular oeuvre, before the narrator comes to the front of the mix over a chiming keyboard motif.

They say you should sing about what you know, and the Von Herzen Brothers do exactly that here, before anther explosive cascade of sound.

The album moves from prog to power metal, symphonic rock and back to folk and electro beats, as the brothers spread their musical net far and wide to evoke lyrical intent through unfettered bluster.

All the more curious then that the snappy intro to ‘Peace Patrol’ comes perilously close to synth pop, before an inevitable wall of sound swamps the track and lifts it to anthemic heights.

A wailing, gritty sax solo and outrageous OTT guitar break suggests a band who don’t do things by half, as they push all the molecules god gave them into an avalanche of awe inspiring sound.

The subsequent Theramin sounding intro to ‘Pirates of the Raseborgian’ ushers in a welcome lighter jaunty piece, flecked by synth noodles, double tracked vocals and a sing-along chorus, which tries hard to rescue a lightweight track.

In contrast, ‘Anil’ is outstanding. It benefits from a gently voiced acoustic intro and another Pye Hastings plaintive vocal on a beautifully crafted piece. The arrangement neatly mirrors the sunny lyrics and gives the album some welcome breathing space.

They round off an inspiring opus with the accordion, acoustic and flute-led ‘Disappear There’

There’s so much to digest here. It took me three listens to trigger all the musical connections, reflecting the fact its an album that demands focus and patience, something prog rock fans alone surely expect when approaching such a significant album as this ****