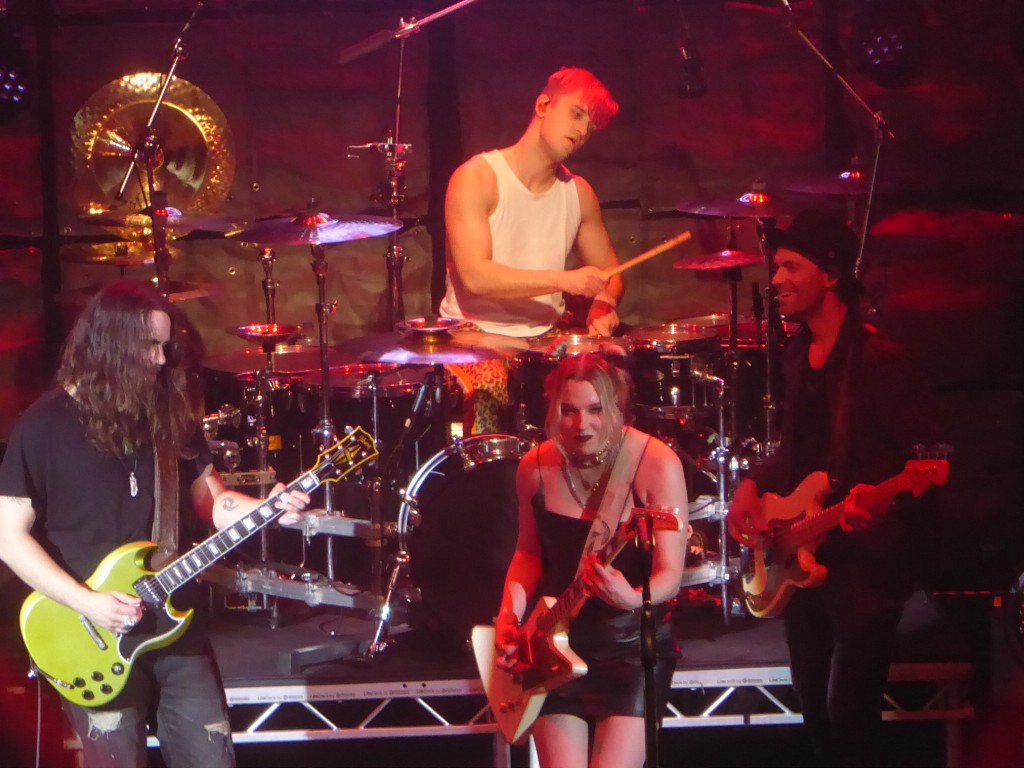 Halestorm have put in the hard yards of touring the UK for over a decade to become a major draw in their own right. This love affair with the country was demonstrated when, in spite of pulling the rest of their European tour owing to Covid restrictions they kept the extensive UK leg, becoming one of the few American bands still to have crossed the pond since the pandemic.

Tickets sold like hot cakes for the London show at Shepherds Bush Empire given that their last two London headlines had been at the significantly larger Brixton Academy and Alexandra Palace. The format of the shows was ‘An Evening with’, with one acoustic and one more conventionally electric set. 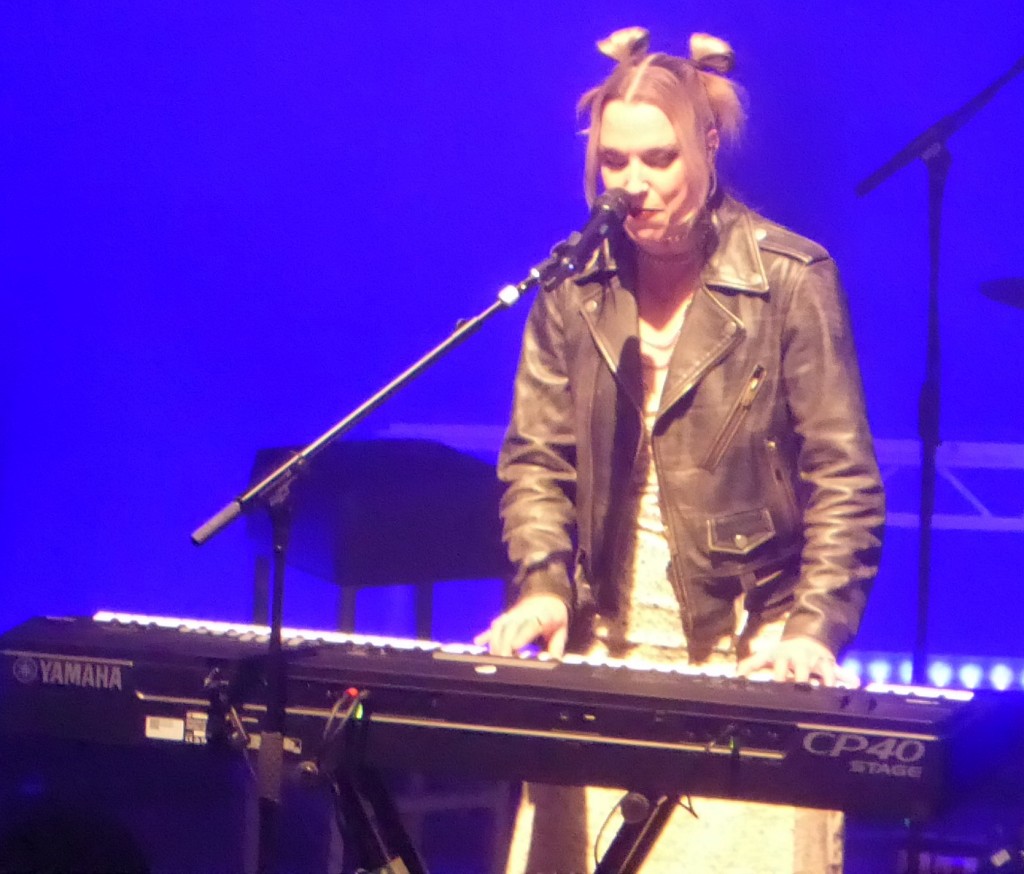 In doing so they followed in the footsteps of Black Stone Cherry, with whom they have much in common in terms of work ethic and musical style, when they played here in similar fashion a few years back. As on that occasion the stalls looked uncomfortably crowded and though I usually prefer to be in the thick of the action made a wise decision to buy in the seated balconies.

The first set began with frontwoman Lzzy Hale taking to the stage in pigtails and nineties indie girl style of dress and boots, with only a piano for company and as she belted out ‘Break In’, ‘Dear Daughter’, and an altogether shorter ‘Raise Your Horns’  in raw and confessional fashion I was drawing unlikely comparisons with Beth Hart. She also made a touching speech about the support and encouragement her parents had given her and drummer brother Arejay in following their youthful dreams. 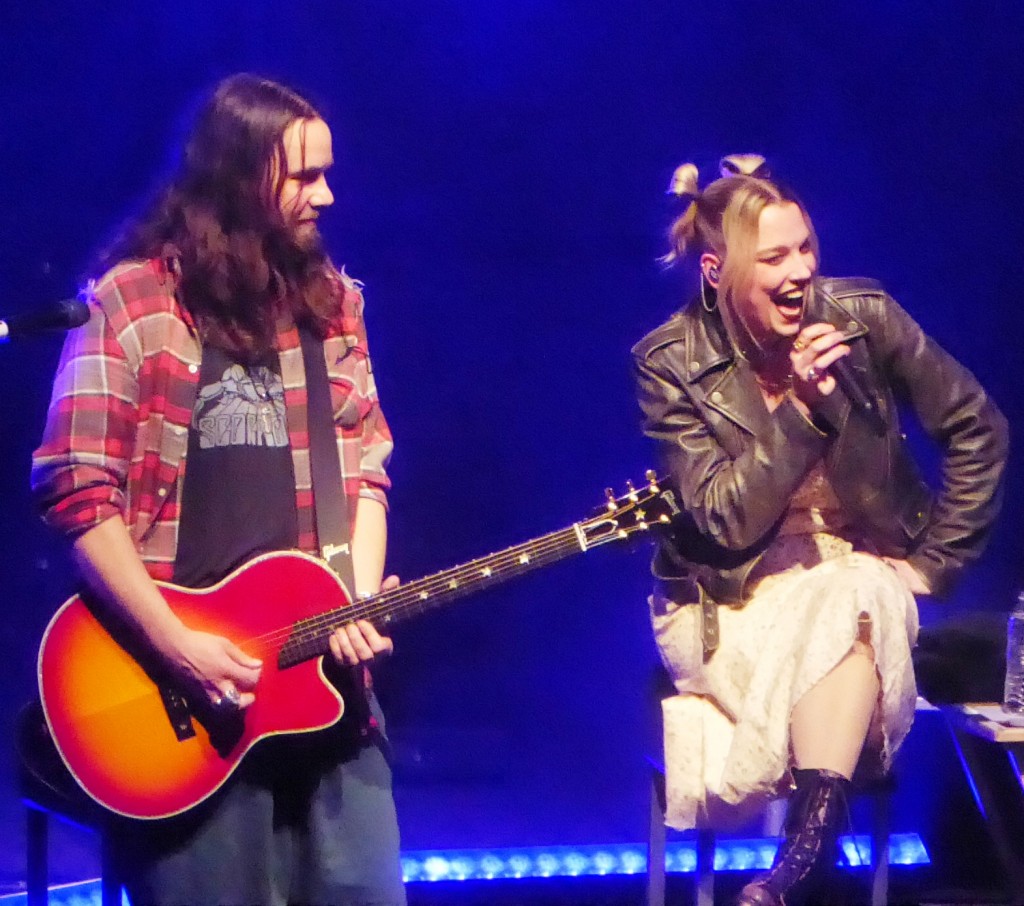 Hirsute guitarist Joe Hottinger then joined her for first album ballad ‘Familiar Taste of Poison’ with the rest of the band (completed by stylishly low-key bassist Josh Smith) coming in halfway through. One of Lzzy’s signature songs in ‘Ms Hyde’ had people punching the air despite the acoustic fashion. Nevertheless opinion was more divided as Arejay reeled off a series of so-bad-they’re-good  one liners in rapid fire fashion familiar to us fans of Tim Vine, except these ‘dad jokes’  were told by a Pennsylvania punk rather than a Surrey public schoolboy.

The band have been well known over the years for an eclectic range of covers and though their own material takes precedence these days, they have apparently been playing a cover associated with the home city on each night of the tour. In this case The Clash’s ‘Should I Stay or Should I Go’ went down well,  while though I was surprised they did not save ‘Apocalyptic’ and ‘I Like it Heavy’ for the main set, in reality there was not too much difference in a semi plugged in format with only electric guitars missing. 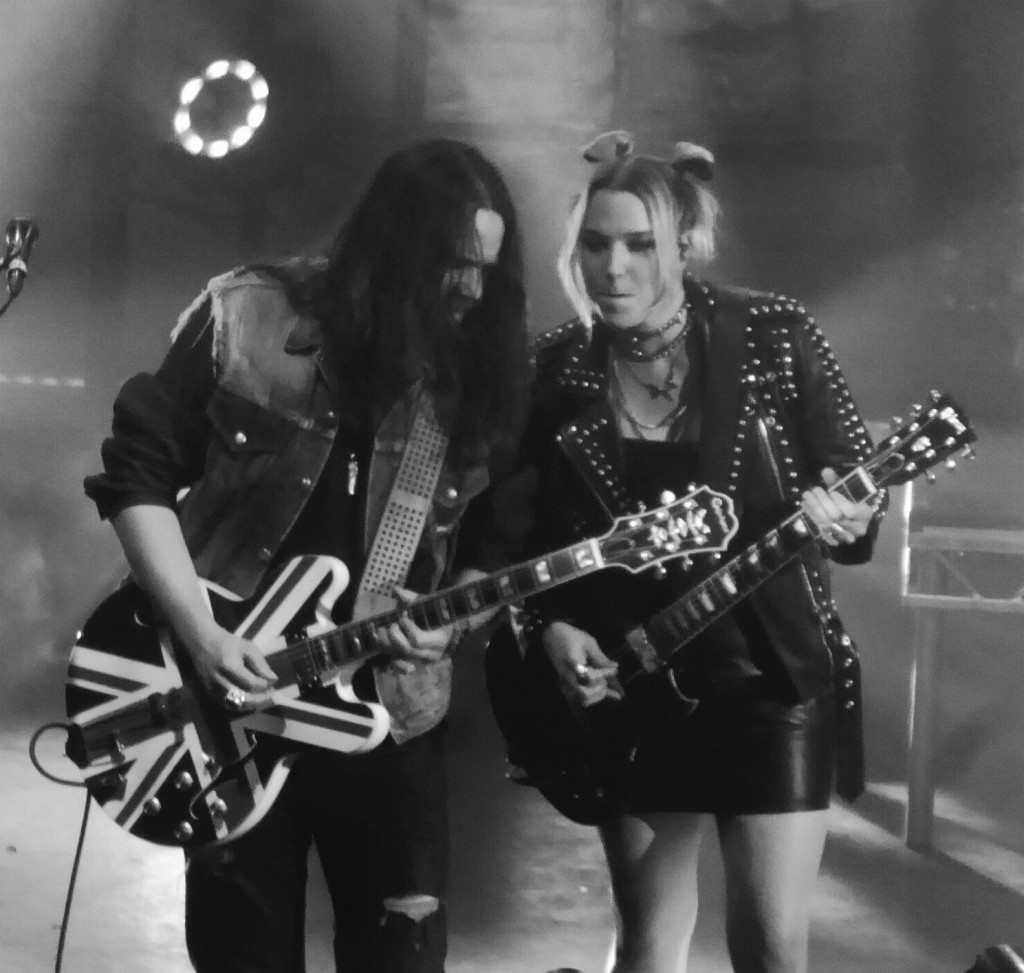 After the interval they returned with Lzzy in more familiar black leather and a stage and lighting show worthy of larger venues. They  opened with one of the songs they released in the pandemic ahead of their new album – ‘Back From The Dead’ which continued in the heavier direction they have been going in.

Though the promotional blurb for the tour that they would be playing deep cuts and fan favourites was a little exaggerated, ‘Rock Show’ nevertheless made a welcome return to the set as did the old set closer ‘I Get Off’ from the first album with again much air punching to the chorus. 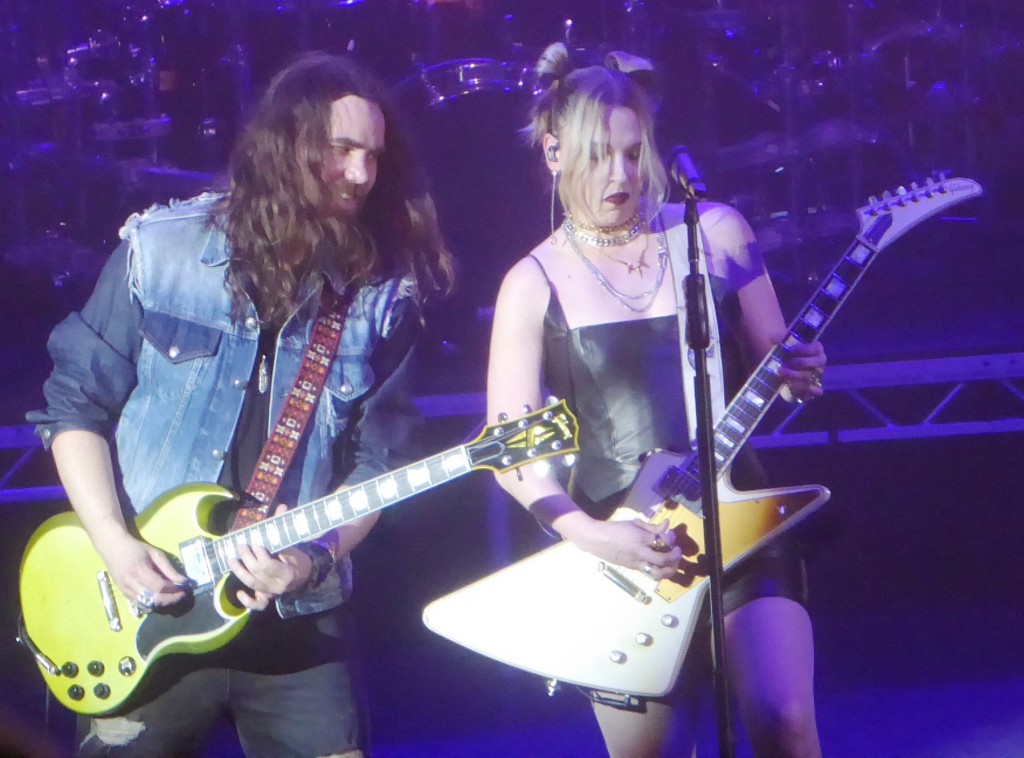 ‘I Am The Fire’ saw both Lzzy and Joe donning 12 string guitars for a powerful anthem while ‘Amen’ took the set to new heights of excellence both with the audience participation then turning into a lengthy jam with Joe let off the leash and he and Lzzy trading guitar solos.

‘Do Not Disturb’, and later ‘Uncomfortable’- with a riff reminding me of Queen’s ‘Stone Cold Crazy’ – showed their more recent heavier direction but I baulked at another new one in ‘Bombshell’ which was too brutally metallic for my tastes. 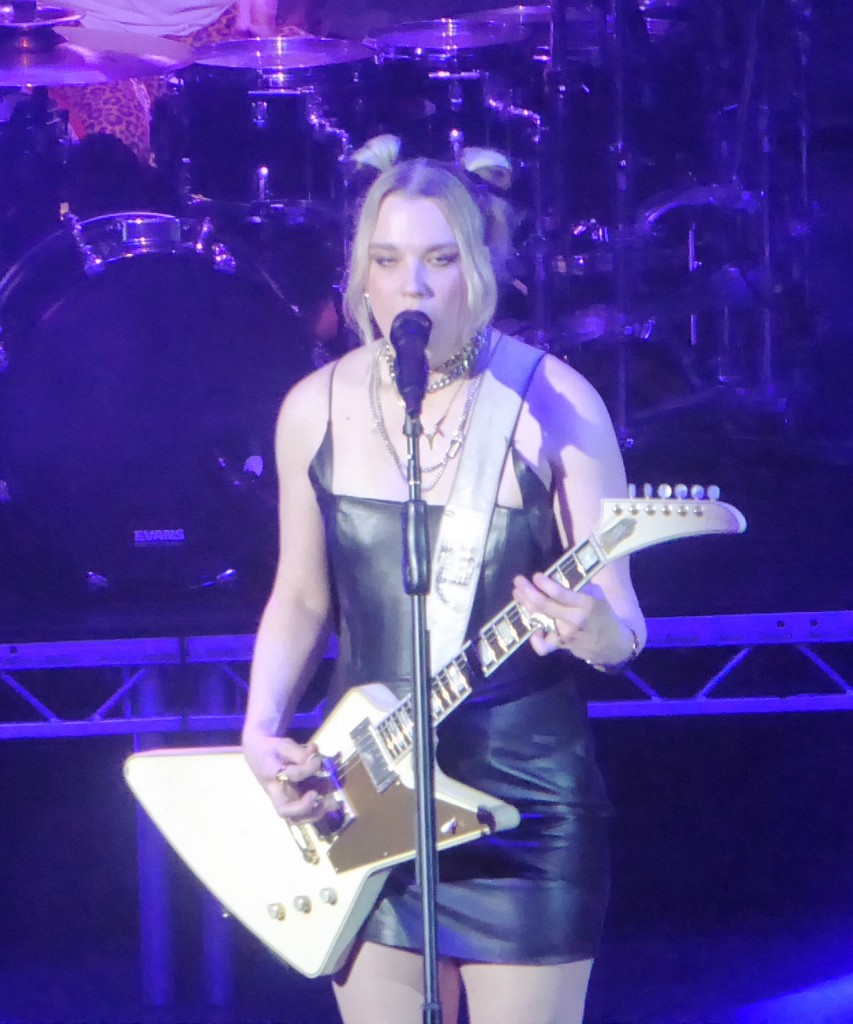 After Arejay’s drum solo – those baseball bats used for drumsticks still raise a smile though by rights we should be tired of them by now – ‘Freak Like Me’ had the crowd bouncing , none more so than a girl a couple of rows in front of me with her parents who could not have been more than eight or nine years old, then another new song in ‘Steeple’ showed both sides of Halestorm at their best – uncompromisingly heavy and yet its ‘this is my church, you are my people’ lyric tailor-made for crowd participation- before the set came to an end rather abruptly.

The encore kicked off with end of tour festivities to thank departing staff and celebrate crew members birthdays prior to ‘Here’s To Us’ seeing beer cans and devil horns waved, before its aggressive ‘Slave To The Grind’-like intro reminded me I had momentarily forgotten about ‘Love Bites (‘So Do I’), followed by another heavy moment in ‘Black Vultures’. 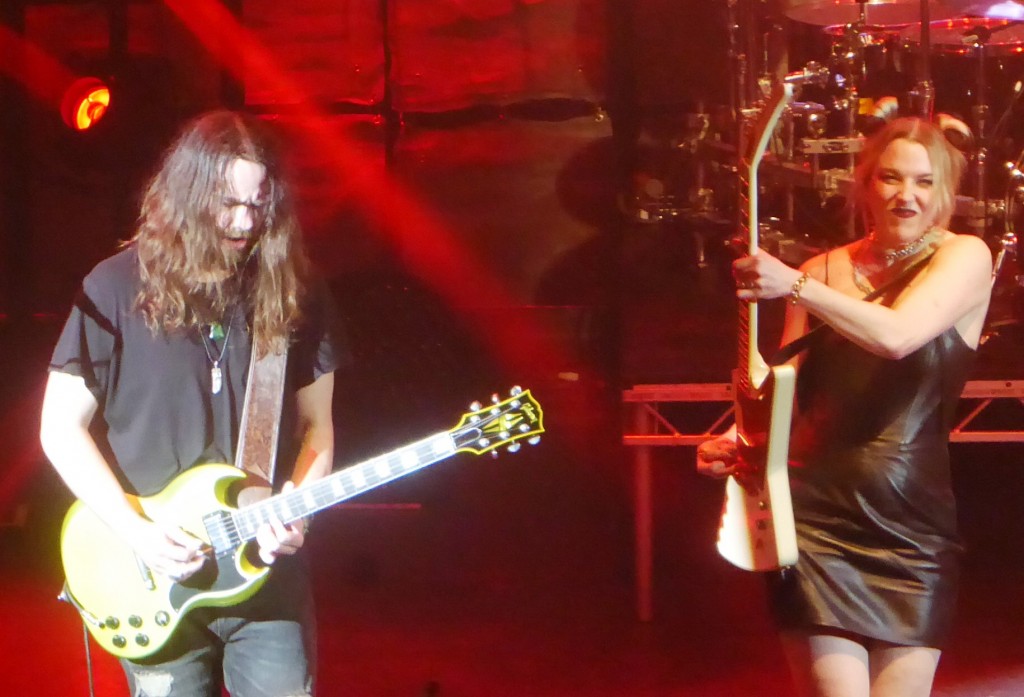 As has been the case on recent tours, ‘I Miss The Misery’ was the set closer, introduced by a big scream from Lzzy. Another great anthem has gradually transformed into a big set piece, now weighing in at 12 minutes, with an epic solo from Joe building the foundation for an extended outro with the band pulling poses and engaging the audience.

It was a fitting end to a special gig, in which the generous length of the twin setlists allowed Halestorm to show their many sides and cement the unique bond they seem to have with their UK fans. 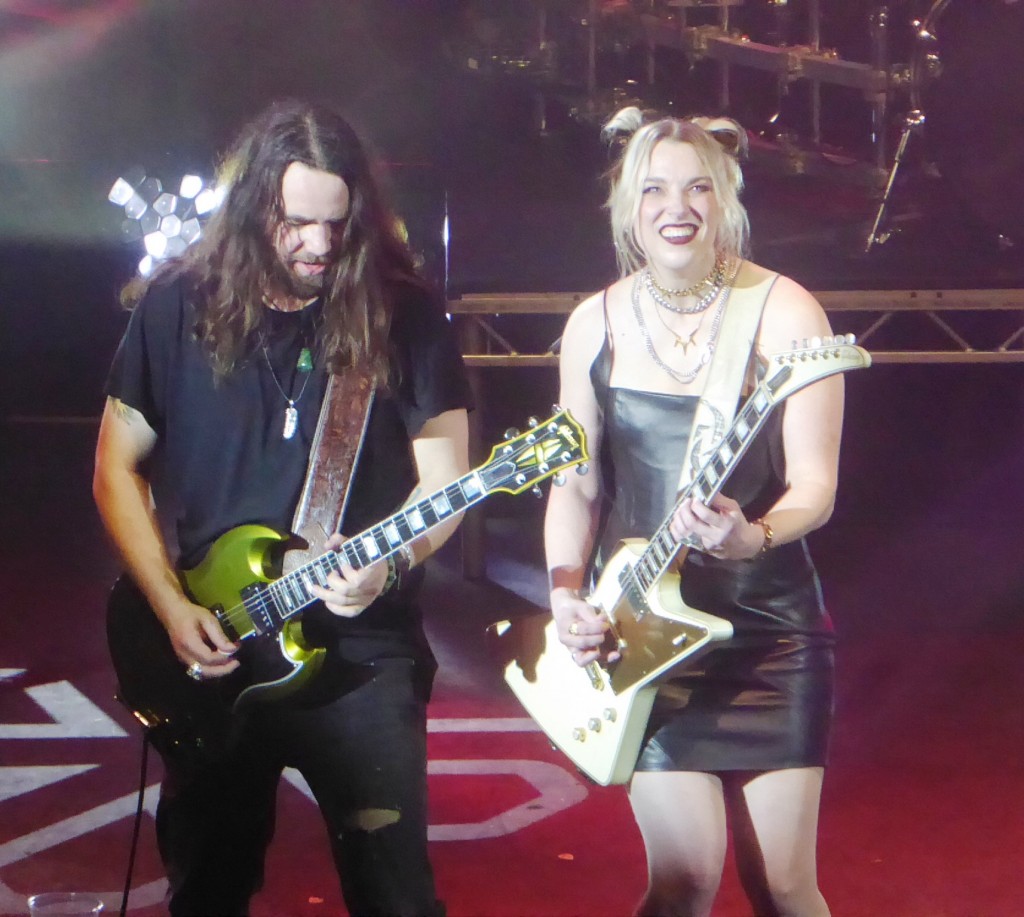