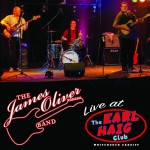 Released on St David’s Day the 1st of March, The James Oliver Band’s ‘Live At The Earl Haig Club’ (Cardiff) is as close as you will get to an old school live album. This all Welsh affair was originally an exercise in matching live tracks with you tube clips, but somehow ended up being a ‘warts and all’ live album with plenty of sweat filled intensity and spontaneity in a raw rocking set.

It’s a limited release, probably in deference to the lo-fi production values and a night on which the band tossed aside the safety net and just went for it.

The result is a rip-roaring set of rock & roll, rockabilly and old time r&b covers which illustrate Oliver’s musical scope and fiery abilities.

With the exception of Peter Green’s ‘Albatross’, there isn’t a moment when the intensity slackens, leaving Oliver with the challenge of making sure his solos crackle and spark with variety, contrast and tonal flexibility. He does so with plenty to spare.

Not that this is in any way a cerebral exercise. Unlike his more considered and conceptual ‘Twang’ studio album, this is more of a rock and roll party as the powerhouse trio just plug in, play and enjoy themselves on 13 exhilarating tracks including encores.

Oliver is a chameleon like presence, given to genre swapping and lightning mid-number diversions, but his quasi-incredulous vocal style and his innate ability to take a booming rocker to another level marks him out as special.

If there’s downside, it’s simply that his ripping intensity sometimes borders on overload. They open with Ray Sharpe’s ‘Linda Lu’, the first of 3 Mick Green related songs and blast it out in double time.

Oliver’s initial fiery solo sets the standard for the rest of the album and he further racks up the intensity on Chuck Berry’s ‘My Own Business’. The ‘call and response’ style intensity borders on the kind of brusque irreverence that recalls Mick Green’s Pirates.

And while Oliver’s exaggerated vocal on ‘Honey Hush’ borders on a pastiche, his incendiary guitar lines including a faux police car motif helps build up to the climatic ‘hi ho silver’ refrain, which is a perfect for a set closer.

Put simply, this is a celebratory set which thinks nothing of tearing through  ‘Walk Don’t Run’ in double time, making it sound like The Ventures or The Shadows on speed.

But hell, The James Oliver Band catches lightning in a bottle to connect with the heady excitement of the early days of rock and roll.

‘American Cars’ is an early highlight with a killer riff, humorous lyrics and an impassioned delivery. There’s a slight cut-out just before Oliver’s solo which gives the track an unexpected extra dynamic, topped by a fluid solo that moves from a jangling opening into a growling finish.

The band get impossibly heavy on Lazy Lester’s ‘Sugar Coated Love’, substituting a lumpen back beat and a sparse vocal  instead of the swing and nuance of the original. But the resulting metallic, sharp edged sounding result is ripped asunder by Oliver’s frantic note repeats and feverish runs.

A cascade of notes magically coalesces with his rhythm section at the 4.10 mark, to give the trio the perfect platform to steam roller into some unbelievable punk metal.

In sharp contrast, ‘Albatross’ reminds us of Oliver’s delicate touch and tone which he manfully delivers over audience chatter.

And so to Bill Haley’s ‘Goofin’ Around’, which is actually an ode to Haley’s guitarist Franny Beecher. Already released as the title track of a live 4 track EP, it feels like an unstoppable avalanche. The rhythm section of bassist Patrick Farrell and drummer Mark Kemlo lay down a formidable backbeat. And as Oliver weaves his magic over the top you can just imagine the packed dance floor in full swing.

Dick Dale’s ‘Miserlou’ is similarly overwhelming, but in a Metal tinged tidal wave sort of way. It’s offset by an eerie and drone like tone that would make the late surf guitar god smile.

The whole set shoots by in a flash, though the imperious feel is somewhat dissipated by the prosaic choice of ‘You Can Never Tell’ and Arthur Crudup’s ‘My Baby Left Me’ as the evening closers.

No matter, the huge audience response tells its own story as the band blow away the cobwebs to rekindle the spirit of early rock and roll with a breathless set. ****