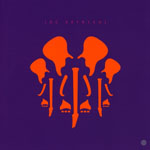 In fact guitar nerds are being spoilt, because this album comes hot on the heels of Steve Vai’s latest offering.  Vai’s is more accessible than we might expect but Satch always delivers in terms of immediacy.

Following on from 2020′s ‘Shapeshifting’ and its predecessor ‘What Happens Next’ there are no real surprises just purposeful precision playing, melodic invention, and great grooves.  With great support from Brian Beller (bass) and Kenny Aronoff (drums) this is another album of successive highlights.

The title track, along with others (notably ‘Through A Mother’s Day Darkly’),  sounds like a soundtrack to some sci-fi box set with the rattling rhythm and vertigo inducing guitar only broken by a brief spacey respite.  There’s some straight ahead R&B/soul with ‘Blue Foot Groovy’, the jazzy ‘E 104th St NYC 1973′ and heavier stuff like ‘Tension And Release’ is a real standout.

And then there’s the dramatic flights like ‘Sailing The Seas Of Ganymede’ and ‘Dance Of The Spores’ with it’s multi-tracked choruses echoing earlier excursions.

‘Faceless’ was released as an advanced track and is actually a bit dirgey although it does get going whilst another early preview ‘Pumpin’ raises the tempo with some sublime jazz-funk.

‘Night Scene’ keeps things pneumatic with a rare Eric Caudieux keyboard break and ’22 Memory’ shows how easily Satriani switches from the intense to the introspective.

Satriani once again manages to sustain a wholly instrumental album with few curveballs (the burst of funfair in ‘Dance Of The Spores’ being the one exception) and forever pushing the envelope.

Recent albums have been a bit jam-based and less structured.  ‘The Elephants Of Mars’ is groove-led but succinct with guitar tones and tricks to die for.  We’ll have to wait until May 2023 for the postponed UK tour and there’ll be lots to catch up on.

More dates to be announced.