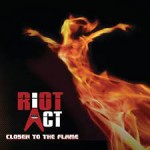 This is the debut album from Riot Act, the band initially formed by former ‘classic era’ Riot members Rick Ventura and Lou Kouvaris and it is a must listen to for any classic hard rock fans. Riot Act performed at the Heavy Metal Hall of Fame in 2020; Rick and Lou were inducted as Riot members in 2018, Rick Ventura was a member of the original Riot from 1979-1984.

As soon as this album started, I knew I was onto an absolute winner, there’s no messing about, there’s no self-indulgence, this is classic rock at its finest, delivered with passion and it needs to be played loud! This album may be a debut, but it is clear from the opening title track, just how tight the musicianship is. Every track is action packed, pure rock and I love it. I was only half-way through the album, foot-tapping, singing along (already to a song I’ve never heard before!) when it was obvious that this is an absolute belter and I immediately added it to my albums of 2022 list.

The guitars are perfectly in harmony with the vocals, have no doubt this is rock perfection, grab your air guitar, you are definitely going to need it!

The band had this to say about the album: “Riot Act’s new album is a culmination of emotions over the past two years. From the excitement of our early rehearsals to the loss of our band mate (Lou Kouvaris, who tragically passed away of Covid19 in early 2020), struggling through a pandemic and not knowing if we were going to continue, the four of us knew that the band had much to offer.

The result of that renewed energy is “Closer To The Flame” and with joining forces with Global Rock Records we are ready for the world to hear this new music we have been working on for so long. Personal standout tracks for me (and they are all good):

“Straight for your heart” – this is so reminiscent of everything that was good about 80’s rock, it took me straight back there, my notes sum it up in one word, fabulous!

“Love Come Round” – with the indisputable line ‘she’s just trouble’, I suspect many a rocker can relate to this song.

“Right Between the Eyes” this was my absolute favourite track of the album, reminiscent of AC/DC in my opinion, this has everything, the guitar riffs are sublime, and Don’s powerful vocal delivery of the lyrics just make this the standout track for me.

The album also comes with a 12-track bonus CD of classic 1979-1981 Riot tracks recut, these recordings feature the final ever recordings of Lou Kouvaris, who tragically passed away of Covid19 in early 2020.

Riot Act will be touring the UK as support to Lillian Axe in the UK throughout August 2022 – I’ll be grabbing a ticket, see you there!

Undoubtedly one of the top rock albums of 2022, at least as far as I am concerned, I will leave you to judge for yourselves. *****