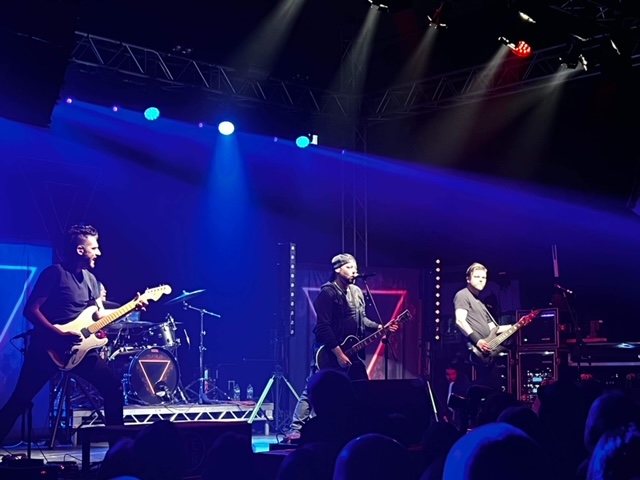 Opening  their set with the rather epic ‘For My Sorrow’ the atmosphere is rocking, and there are clearly some fans in the audience and it’s a reflection that actually this tour celebrates three bands that are all on their ascendancy, what a peer group to have.

The Fallen State are a talented bunch, the latest album ‘Between Hope & Disillusion’ demonstrates the transition they have made with a change in the line-up, with Adam joining as lead singer and what a transition it is! The set includes 2 tracks from this latest album ‘Standing Tall’ and ‘Knives’ as well as the crowd pleaser ‘Burn it to the Ground’.

Closing out with ‘Nova’ which showcases Adam’s vocal range perfectly, the crowd are enraptured, what a way to start this evening off!

Having spotted some familiar faces who I’d met at HRH14 – when The Fallen State headlined the 2nd stage -  chatting to and thinking they were a local couple I discovered that off the back of HRH they had wanted to see the band again, having travelled from Bude and Yorkshire. That’s rock family dedication right there! I caught up with the band after their set, they were pumped that they had such a good crowd in, for such an early kick off (6:30) on a Monday night and rightly so, great performance! 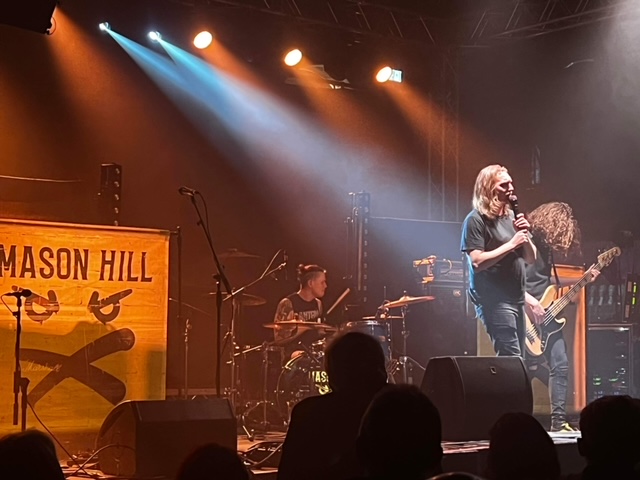 Mason Hill opened their set with ‘Hold On’, the venue filling up again, some people have been caught out by the early start with an early curfew tonight.

Next up is the rip roaring, ‘DNA’ with the crowd joining in, this band is engaging and energetic, the pleasing ‘Find My way’ leads into the rocking ‘Out Of Reach’ which is a personal favourite.

The band tell us that they are currently at No 4 in the charts with their latest release ‘Live In Glasgow’, and that they’d like to retain their chart position if at all possible and not be replaced by ‘pop’ acts as the week rolls on – they certainly deserve the chart position and I really hope it encourages more air play and attracts new fans to the rock genre.

‘We Pray ‘ and ‘Broken Son’ seem even more poignant as the set comes to its conclusion, and Scott, the lead singer, reveals that he lost his Mum a week ago and asks the crowd to join in with her favourite song, ‘Against the Wall’ which he dedicates it to her; there is not a dry eye in the house and the emotion in that final song is clear to see – absolute hats off to Scott and all of Mason Hill.

I don’t know how they could perform as they did given the personal circumstances and the support for Scott was so clear from the rest of the band – what an amazing band of brothers.

Stone Broken launched their set with ‘Revelation’ the single from their latest album of the same name which has recently been released, the band are on fine form, with tight performance and a good dose of Midlands humour too, the crowd are on it from the off.

The packed set includes two other new tracks, the latest single ‘Black Sunrise’ and ‘The Devil You Know’, which are received really well, the new album is cracking, the band chuck their merchandise into the crowd – now knowing that this is how bands realistically make any money these days, this is really nice gesture.

Following the acoustic ‘Wait For You’ which is just divine, the band liven things up again by chucking in a cheeky cover of Bad Company’s ‘Feel Like Makin’ Love’, they own it, the crowd love it, we are all joining in, yep Stone Broken have got the crowd eating out of their hands.

Closing with the ‘Not Your Enemy’, the band are on fire and the crowd are loving them, what a set, it had me immediately deciding to go to the Birmingham date as well!

What an epic gig, three outstanding bands, all with new albums recently released, that all commanded the stage and audience for their respective sets.

I’ll be back to see each of these bands again, they are truly representative of the new wave of classic rock. Special shout out to the Marble Factory too, great venue, the sound quality is superb, and the staff are friendly, long may this place continue to rock!

*Unfortunately, since this gig, the lead singer of Stone Broken, Rich, has been diagnosed with acute laryngitis and the rest of the tour is being rescheduled. When the revised dates are made available there’s still time to catch this epic tour – I may just join you.