Album review: MICK WHITE – Something’s Got To Give 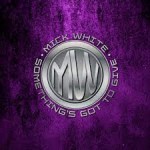 Now here’s a blast from the past. I first encountered vocalist Mick White in the late 80s when he was working with Paul Samson, and later when he fronted First Strike (that Just Another Night album is really well worth searching out). He has also appeared on various compilation albums, including the Only UFO Can Rock Me and Lights Out tribute albums. His solid, powerful yet velvety voice really should have seen him a household name.

A couple of solo singles (included here) and a reworking of a First Strike track, this is Mick’s first full solo album and it’s long overdue. The guitars, bass and keyboards are handled by Luke Hatton, with drums come from Carsten Enghardt.

Opener ‘Burning In The Night’ is a fantastic track, the guitar harmonies with depth from the keyboards mix melodic FM hard rock with power metal. ‘Something’s Got To Give’ is chunkier track, it doesn’t flow in the same way but is solid and has a good riff. Without You is then a little moodier. The uptempo ‘Emergency On Planet Earth’ delivers a message and some good riffs too, this one gets the foot tapping.

Change of pace for ‘Ordinary Girl’, starts off acoustically and builds to an enjoyable power ballad. Not the first (or last) nod to the 80s. ‘Hold Tight’ features some ethereal noodling that help the mood drift perfectly.

Overall this is an excellent album; very much of a time but that doesn’t mean it’s dated, it is a very good listen but something White should have released 35 years ago. The mix of power metal, melodic rock, power pop/rock blended to perfection, the voice suits.  I very much hope that there is more to come. ****